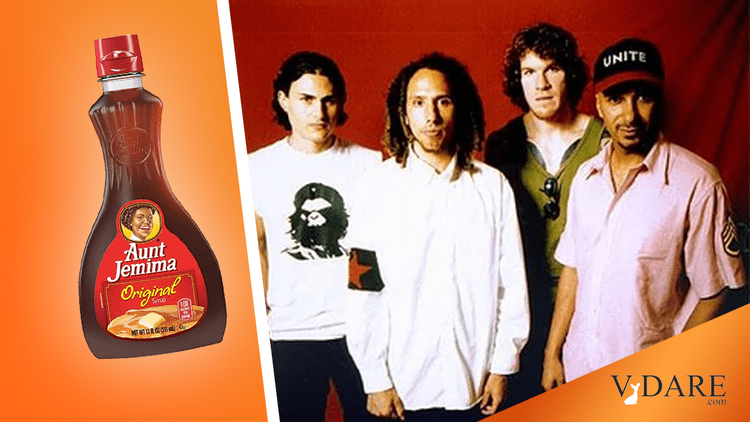 Rage Against the Machine's Aunt Jemima 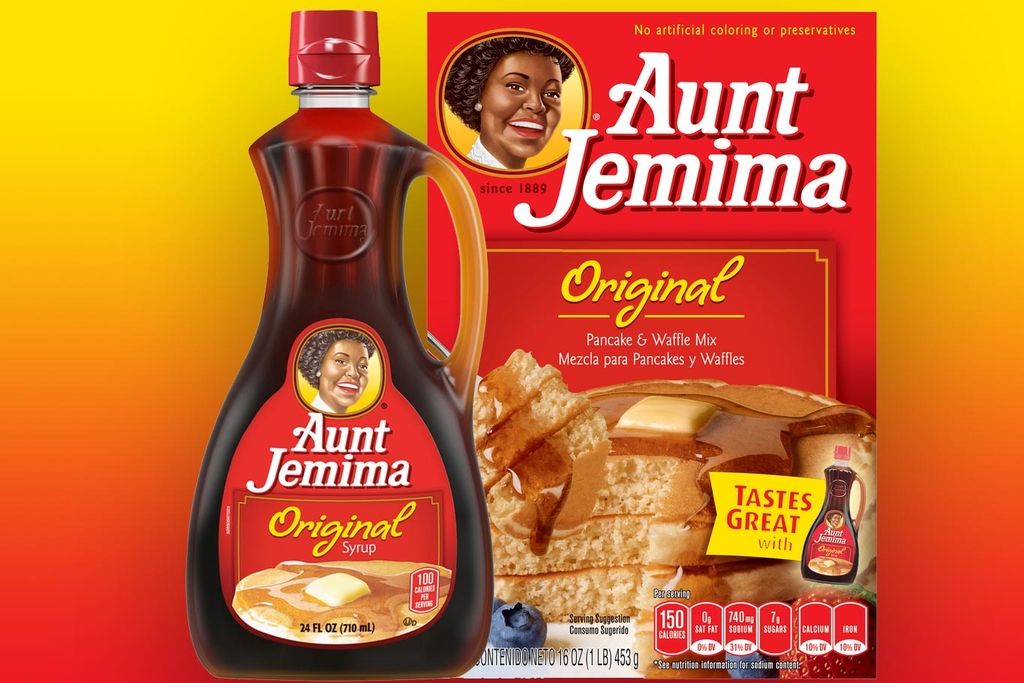 With the news that Quaker Oats is canceling its Aunt Jemima maple syrup, because, well, nobody associates blacks with good cooking anymore, I’m reminded that one of the funnier biographical patterns is that two frontmen of the leftist 1990s rock group Rage Against the Machine have the two most Obama-like biographies imaginable.

Zacharias Manuel de la Rocha was born in Long Beach, California, on January 12, 1970, to a Mexican-American father (the artist Robert “Beto” de la Rocha, born 1937) and a mother of German and Irish origin, Olivia Lorryne Carter (born 1941). Beto was a muralist and a member of Los Four, the first Chicano art collective to be exhibited at a museum (LACMA, 1973). De la Rocha’s paternal grandfather, Isaac de la Rocha Beltrán (1910–1985),[6] was a Mexican revolutionary who fought in the Mexican Revolution and worked as an agricultural laborer in the U.S. De la Rocha would later see the hardships his grandfather endured reflected in the struggles of the Zapatista Army of National Liberation.

De la Rocha’s parents divorced when he was six years old, and he moved from East Los Angeles to Irvine with his mother, who attended the University of California at Irvine and ultimately earned a PhD in anthropology. De la Rocha later described Irvine as “one of the most racist cities imaginable” and said that “if you were a Mexican in Irvine, you were there because you had a broom or a hammer in your left hand.”

And from Wikipedia about guitarist Tom Morello, whose guitar sound I find as unpleasant as de la Rocha’s voice, but whom I like as a singer:

Morello was born on May 30, 1964, in Harlem, New York, to Ngethe Njoroge and Mary Morello. Morello, an only child, is the son of an American mother of Italian and Irish descent and a Kikuyu Kenyan father. His mother was a schoolteacher from Marseilles, Illinois, who earned a Master of Arts at Loyola University, Chicago and traveled to Germany, Spain, Japan, and Kenya as an English language teacher between 1977 and 1983.

His father participated in the Mau Mau Uprising (1952–1960) and was Kenya’s first ambassador to the United Nations. Morello’s paternal great-uncle, Jomo Kenyatta, was the first elected president of Kenya. His aunt, Jemimah Gecaga, was the first woman to serve in the legislature of Kenya;

Yes, Tom Morello of Rage Against the Machine had an Aunt Jemima who was a famous feminist role model/nepocrat in Kenya.

and his uncle Njoroge Mungai was a Kenyan Cabinet Minister, Member of Parliament, and was considered one of the founding fathers of modern Kenya. His parents met in August 1963 while attending a pro-democracy protest in Nairobi, Kenya. After discovering her pregnancy, Mary returned to the United States with Njoroge in November and married in New York City.

When Morello was 16 months old, Njoroge returned to his native Kenya and denied his paternity of his son. Morello was raised by his mother in Libertyville, Illinois.

I used to drive out from Chicago to play golf at the idyllic Pine Meadow course in Libertyville.

and attended Libertyville High School, where his mother was a U.S. history teacher. …

Morello developed leftist political leanings early, and has described himself as having been “the only anarchist in a conservative high school,” and has since identified as a nonsectarian socialist. …

Morello graduated from high school with honors in June 1982 and enrolled at Harvard University as a political science student that autumn.

It’s widely assumed that interracial marriage will solve all racial problems. Yet, children of mixed marriages seem to largely be at the forefront of the current hatefest.

Consider Morello, who, unlike de la Rocha, strikes me as a naturally healthy, sane fellow. If you search for Morello’s videos as a solo artist, he’s appearing alongside a gallery of guys I think are pretty formidable: Johnny Cash, Neil Diamond, Kris Kristofferson, Bruce Springsteen, Joe Strummer, etc. Clearly, Morello strikes other alpha male stars as one of the club: After all, he’s Jomo Kenyatta’s grandnephew, and you can’t get to be more of a Big Man than Jomo Kenyatta.