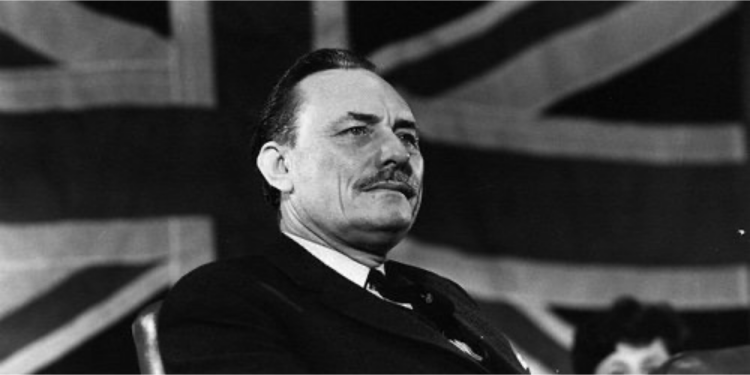 Sam Francis here repeats (he can't be right all the time) the media-filtered conventional wisdom that Enoch Powell's April 1968 speech ruined his career. On the contrary, it made it. It transformed him into the unofficial opposition to the center-left consensus, both in its Labor and (after 1970) Conservative forms. For six years, he was constantly in the headlines. And for one incredible moment – just like Pat Buchanan in the week after the 1996 New Hampshire primary – it looked like he had achieved the impossible.

The government of Conservative Prime Minister Edward Heath had been a disaster. In 1974, he attempted to recoup by calling an election allegedly over a national miners' strike, although it was perfectly clear that he would capitulate afterward. Everyone assumed he would win, but he lost. Powell seemed about to inherit the rump of the party and begin the process of reshaping it in his own image.

It didn't happen because of a suicidal development at the moment of triumph, worthy of the Greek tragedies upon which Powell was an expert.  He was no longer in parliament – a prerequisite for the leader under the party's rules. He had chosen not to run in protest against Heath's calling the election on what he regarded as a fraudulent issue.

This was certainly a stand on principle – parliamentary candidates are supposed to swear allegiance to the party leader, although there are weasel ways around it – but it was a fatal career move. (And a radical shock to his supporters, including me: I was just going to press with an article outlining the above scenario in Canada's Financial Post.)  After the election, it was Margaret Thatcher who challenged Heath, won an upset victory, and basically claimed Powell's mantle. He re-entered Parliament as an Ulster Unionist shortly afterward and remained a presence, but there was no leadership vacancy – and no opening on Margaret Thatcher's right.

Why don't you know about this? Because of the united anathema pronounced against Powell by the British media, filtered through, and enhanced by, the American media. Similarly, Pat Buchanan's achievements in the 1992 presidential primaries were double-thought out of existence by the American media, which did not prevent and indeed rendered more shocking his 1996 victories. And, similarly, the whole Buchanan episode is down the memory hole again – for now. (A good source on Powell's brilliant 1968-1974 high wire act is Simon Heffer's biography Like The Roman.)

In his independence and political entrepreneurship, Powell was much more like an American Presidential candidate than the line-toeing, organization-men types produced by the British (and Canadian) parliamentary system. Ironically, he himself was fiercely anti-American, on the not unreasonable grounds that the U.S. had undercut the British Empire. But, hey, our friends at www.lewrockwell.com are fierce Anglophobes – it takes all types. (Sigh.) [Lew Rockwell tells  reproachfully that he's an Anglophile who just doesn't like the British state.]  In his combination of economic liberalism and nationalism, Powell was an early paleolibertarian. He is a man for both the twentieth (liberalism vs. socialism) and twenty-first (globalism vs. national question) centuries.

The urgent reason for this lesson in the politics of an obscure country is this: in the early 1970s, it was commonly said that if Britain had had the U.S. system, with popular-vote primaries, Powell would have become President. No-one ever denied he had overwhelming popular support.

Now, in the U.S. with all its primaries, presidential candidates are afraid to raise the immigration issue.

The real lesson of Powell's career: come on in, boys, the water's fine.