Is It Too Late For Germany?

Tübingen is one of the most charming towns in Germany. Romantic poets like Friedrich Hölderlin and Eduard Mörike and philosophers like Hegel and Schelling once lived there. The historical center was not damaged at all during WW II. Today it is a town of 90,000 inhabitants, of which more than 20,000 are students. They enjoy a much higher quality of life than most Germans. Go there if you want to get a glimpse of how Germany was—and to understand how mass immigration is destroying it.

“Tübingen was one of those towns in which women could move without fear. Unfortunately, this changed," says Mayor Boris Palmer. The reason has the face of a 21 year old African immigrant who has been arrested on suspicion of rape in at least four cases.

He comes from Gambia and he has no chance of obtaining asylum. Yet he and another hundred African immigrants living in Tübingen have been tolerated for years and years by the authorities.

Sexual assaults in town are conspicuously increasing, wrote Mayor Palmer on Facebook.  He appealed for strict border controls and requested DNA screenings from African immigrants to detect the perpetrators of sex crimes and facilitate their deportation.

Now, Palmer is not a member of the rightist AFD, not even of the center-left CDU. He’s a Leftist, a member of the Green Party which always was and still is for Open Borders. He changed his mind (and was immediately isolated in his party) only when he experienced the effects of Ms. Merkel´s “universalism” in his hometown. 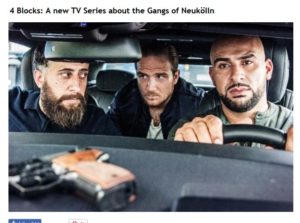 Palmer´s political history is reminiscent of Heinz Buschkowsky, the former Social Democratic (SPD) mayor of the Neukölln district. It was once one of the hottest spots in Berlin, but is now a no-go area that has been for many years in the hands of Arab criminal clans. The gutsy mayor did what he could to protect the families of German workers still living there, but it was no use. The city government, composed of the ruling Green and SPD parties, closed to their eyes to the colonization of a considerable part of the German capital by criminals. The Germans left the quarter; the Arab gangsters remained.

Yet Tübingen is a special case. It is not an anonymous urban conglomeration in which immigrants, gangsters and terrorists can mix relatively unobserved. It is a small town; many inhabitants know each other. And so the negative effects of Muslim and African mass immigration are easily perceived everywhere.

The most urgent problem: the tremendous growth of crime. Germany’s government and Main Stream Media deny that it is caused by immigration, repeating the lie that immigrants are no more and no less criminal than the Germans themselves. Recently, however, Jochen Renz, Professor for Artificial Intelligence at the Australian National University, showed in an exhaustive study that their crime rate is far higher  than that of native-born Germans.

The crime rate is obviously only the tip of the iceberg. The Islamization of Germany continues slowly but steadily. Veiled women accompanied by bearded men are no longer only seen in big cities. During Ramadan, the Berlin police were advised to tolerate aggressive behavior by Muslims because they are fasting and therefore easily annoyed. And Muslim organizations, financed and supported by Turkey, Saudi Arabia and other Muslim countries, are expanding their influence step by step, winning new concessions from the government seemingly every day.

Leading German politicians had committed to this process even before the great immigration wave in 2015. By 2006, the finance minister Wolfgang Schäuble declared that “Islam is part of Germany and Europe “. Former German President Christian Wulff said much the same in 2010, as did Angela Merkel in January 2015—nine months before she opened the gate for more than a million migrants from Syria, Iraq, Afghanistan and other Muslim countries.

Yet most Germans disagree. Only 22% said Islam is part of Germany in a 2016 opinion poll; 61% disagreed.

Yet this huge majority seems to have no influence on elections. This year, Merkel´s CDU has already won the regional elections in tiny Saarland, in medium-sized Schleswig Holstein and in Nordrhein-Westfalen, the biggest and most important of the German Lander = states]. The most recent polls project a clear victory of Angela Merkel in the upcoming election of the Bundestag [parliament] on September 24. The CDU may get up to 40%, followed by the social-democratic SPD (up to 25%). The rightist AfD, the only anti-Islam and anti-migration party, will remain under 10% (although this exceeds the 5% threshold necessary to enter Bundestag) [Who will win the German election 2017? Latest polls as Angela Merkel battles Martin Schulz, by Alice Foster, Express, July 3, 2017].

There are many reasons why this situation prevails. Merkel moved to the Left and thus disarmed her political opponents, especially SPD leader Martin Schulz, the former president of the European Parliament. Merkel even consented when a left-leaning majority in the Bundestag, joined by deputies of her own party, voted for gay marriage  in open contradiction not only to the moral attitude of the conservative majority in the country but also to the German constitution  [Germany Could Have Same-Sex Marriage This Week, as Angela Merkel Reveals Change of Heart, by Robert Mackey, The Intercept, June 17, 2017].

On the other hand, the once-rising AfD has no clear leader, is torn by factions and is literally persecuted as “Nazis” by all other parties, the MSM and even the churches. AfD meetings and conventions are regularly disrupted by Leftist militants, many of their politicians have been threatened or attacked and their cars vandalized. It’s no wonder so many people are afraid to admit their political sympathies. Very few Germans are ready to pay the price of social exclusion.

Beyond this narrow political explanation, there are deeper, and more disturbing reasons for the voters’ behavior. The extraordinary fact is that Germany no longer exists anymore as the nation-state of the Germans—as the political expression of the German people. The very notion of the German nation was deconstructed long before the Muslim invasion started. There are no “Germans” in Merkel´s State, only “people who are longer here and people who are not so long here,” as Angela Merkel put it.

These are the results of years and years of re-education after the horrors of National Socialism. First the Germans were obliged to see themselves as “Europeans “. Then their country became a land of nowhere, a culturally and historically undefined entity, open for everybody, governed by a political class which already substituted “Europeanism” with “universalism “.

As a German, I am forced to contemplate the possibility that maybe it is too late—and there is no way back.