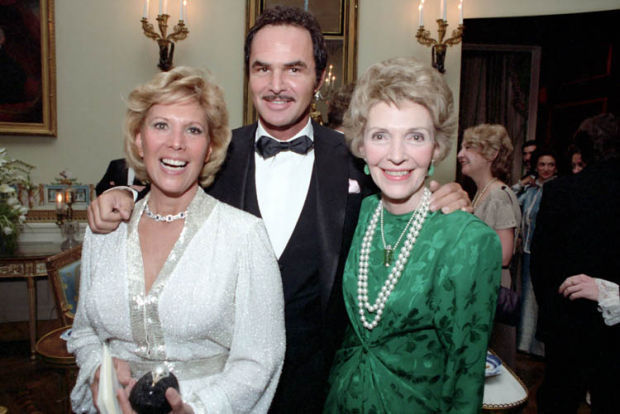 Dinah Shore And The Myth Of Southern Anti-Semitism

Above, Dinah Shore, Burt Reynolds, and Nancy Reagan at a state dinner in 1984

For my article in Taki's Magazine on the movie Sunset Boulevard, I was reading up on Dinah Shore, who conducted a very public romance with the 20-year-younger Burt Reynolds in the 1970s.

Dinah was an endlessly popular blonde Southern belle from Tennessee, who had a huge hit with "Buttons and Bows" in 1948 (it's sung in "Sunset Boulevard," by the way). Her style of music faded, but she never left the spotlight as the hostess of the Dinah Shore Chevy Show. One article I found claimed that "By the 1960s Dinah was probably the most familiar face in American homes after the president." In the 1970s, she had her own talk show, and was likely the most popular female talk show hostess ever until Oprah. It didn't hurt that she didn't seem to age. (In the picture above, she is 67-years-old, a half-decade older than the First Lady, who was a former starlet.)

Her sponsorship of the big money Dinah Shore Nabisco golf tournament in Palm Springs each spring was a major step forward for the LPGA. (Dinah didn't appreciate that the tournament became, and remains, a national lesbian rendezvous.)

Not surprisingly, at Vanderbilt in Nashville in the 1930s, Dinah was a Big Woman on Campus. From the Vanderbilt alumni magazine:

Born Frances Rose Shore in Winchester, Tenn., in 1916, she majored in sociology at Vanderbilt and served as president of the Alpha Epsilon Phi sorority and the Women’s Student Government Club. She was selected “band sponsor” (an early version of homecoming queen) and founded the Athenian Sing, an a cappella singing contest among fraternities and sororities that continues to this day as a campus-wide talent competition. She also sang on the WSM [Nashville AM] radio show Rhythm and Romance, whose theme song was the 1926 standard “Dinah.” Shore put her own stamp on the song and appropriated its title for her professional name. ...

In a survey of the top 50 stars in the history of the medium, TV Guide ranked Shore at No. 16.

Since she was president of Alpha Epsilon Phi, it couldn't have been a secret to many at Vanderbilt that Fanny Shore, the daughter of a small town haberdasher, was Jewish. But, that didn't seem to hurt her popularity much.

One might think, from things like Philip Roth's alternative history The Plot Against America, that the South is teeming with anti-Semites, but that seems to be more the cherished belief of Northern Jews than the bitter experience of Southern Jews