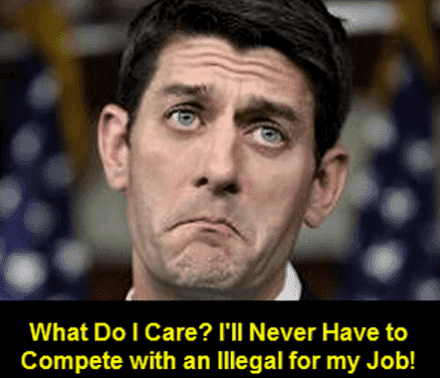 Some big-money Republican donors...are stepping up their warnings to GOP leaders that they risk long-term damage to the party if they fail to pass immigration legislation.

...Fred Zeidman, a Texas oil executive and fundraiser. "For my party to fight the inevitable, I think, is so incredibly shortsighted."

Zeidman was singing the same song during the 2012 election, as I noted in Did Jewish GOP Donors Buy Romney's Immigration Wimp-Out?

Norman Braman, a Miami businessman and donor, said he is asking candidates for their stance on immigration when they seek campaign contributions, and that he is likely to turn down those who don't back the legislation. He thinks now is a time for donors to flex their muscles.

Carlos Gutierrez, who served in George W. Bush's cabinet and is now heading the group Republicans for Immigration Reform…said he has turned down two Republicans who sought contributions—one a senator and one a member of the House—because they oppose immigration legislation.

(Guitierrez, though, is really just a servant – in discussing his Treason Lobby employment in Is Cash Avalanche Sweeping GOP Into Amnesty Acquiescence? I noted his outfit is funded by the usual suspects including the ubiquitous Sheldon Adelson.

A somewhat more unusual specimen is

John Rowe of Chicago, the former CEO of Exelon Corp.,

…has held fundraisers for Republican Sen. Lindsey Graham of South Carolina, one of the architects of the Senate immigration bill. He also has donated to GOP Reps. Paul Ryan of Wisconsin and Aaron Shock of Illinois, who support a path to citizenship for those here illegally.

Lindsay Graham and Paul Ryan are of course unspeakable but this gives insight into why the young Aaron Schock made such a fool of himself about Amnesty this summer.

Some Republicans say the political risk to the GOP is overblown...Sen. Jeff Sessions (R., Ala.), a leading opponent of the Senate bill, called the political argument "nonsense" in a summer memo to House Republicans. The party lost in 2012 "because they hemorrhaged support from middle- and low-income Americans," he wrote

which of course is the VDARE.com position.

It is entirely appropriate that these rich men should resort to bribery and threats. Their "arguments" are completely specious and selfish.

All too often what lies beneath is ethnic and religious animosity to the historic American nation.