If God Is Dead, Can America Survive?

In a recent column, Dennis Prager made an acute observation.

"The vast majority of leading conservative writers ... have a secular outlook on life. ... They are unaware of the disaster that godlessness in the West has led to."

These secular conservatives may think that "America can survive the death of God and religion," writes Prager, but they are wrong.

And, indeed, the last half-century seems to bear him out.

Is this not the recent history of the West?

Today, no great Western nation has a birthrate that will prevent the extinction of its native-born. By century's end, other peoples and other cultures will have largely repopulated the Old Continent.

European Man seems destined to end like the 10 lost tribes of Israel—overrun, assimilated and disappeared.

And while the European peoples—Russians, Germans, Brits, Balts—shrink in number, the U.N. estimates that the population of Africa will double in 34 years to well over 2 billion people.

What happened to the West?

As G. K. Chesterton wrote, when men cease to believe in God, they do not then believe in nothing, they believe in anything.

As European elites ceased to believe in Christianity, they began to convert to ideologies, to what Dr. Russell Kirk called "secular religions."

For a time, these secular religions—Marxism-Leninism, fascism, Nazism—captured the hearts and minds of millions. But almost all were among the gods that failed in the 20th century.

These, too, give meaning to the lives of millions, but these, too, are inadequate substitutes for the faith that created the West.

For they lack what Christianity gave man—a cause not only to live for, and die for, but a moral code to live by, with the promise that, at the end a life so lived, would come eternal life. Islam, too, holds out that promise.

Secularism, however, has nothing on offer to match that hope.

Looking back over the centuries, we see what faith has meant. 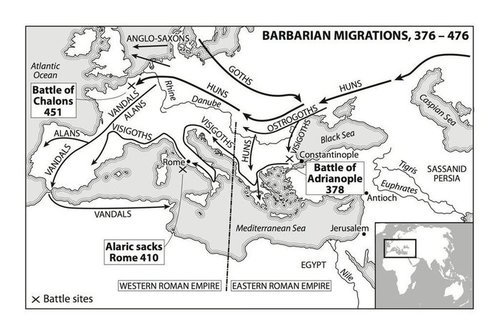 When, after the fall of the Roman Empire, the West embraced Christianity as a faith superior to all others, as its founder was the Son of God, the West went on to create modern civilization, and then went out and conquered most of the known world.

The truths America has taught the world, of an inherent human dignity and worth, and inviolable human rights, are traceable to a Christianity that teaches that every person is a child of God.

Today, however, with Christianity virtually dead in Europe and slowly dying in America, Western culture grows debased and decadent, and Western civilization is in visible decline.

Rudyard Kipling prophesied all this in "Recessional":

"Far-called our navies melt away;

On dune and headland sinks the fire:

Lo, all our pomp of yesterday

Is one with Nineveh and Tyre!"

All the Western empires are gone, and the children of once-subject peoples cross the Mediterranean to repopulate the mother countries, whose native-born have begun to age, shrink and die.

Since 1975, only two European nations, Muslim Albania and Iceland have maintained a birthrate sufficient to keep their peoples alive.

Given the shrinking populations inside Europe and the waves of immigrants rolling in from Africa and the Middle and Near East, an Islamic Europe seems to be in the cards before the end of the century.

Vladimir Putin, who witnessed the death of Marxism-Leninism up close, appears to understand the cruciality of Christianity to Mother Russia, and seeks to revive the Orthodox Church and write its moral code back into Russian law.

And what of America, "God's country"?

With Christianity excommunicated from her schools and public life for two generations, and Old and New Testament teachings rejected as a basis of law, we have witnessed a startlingly steep social decline.

Since the 1960s, America has set new records for abortions, violent crimes, incarcerations, drug consumption. While HIV/AIDS did not appear until the 1980s, hundreds of thousands have perished from it, and millions now suffer from it and related diseases.

Forty percent of U.S. births are out of wedlock. For Hispanics, the illegitimacy rate is over 50 percent; for African-Americans, it's over 70 percent.

Suicide is a rising cause of death for middle-aged whites.

Secularism seems to have no answer to the question, "Why not?"

"How small, of all that human hearts endure, That part which laws or kings can cause or cure," wrote Samuel Johnson.

Secular conservatives may have remedies for some of America's maladies. But, as Johnson observed, no secular politics can cure the sickness of the soul of the West—a lost faith that appears irretrievable.