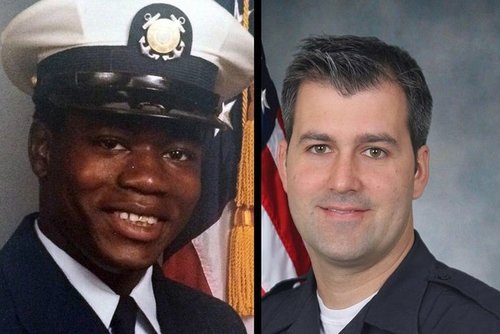 By an odd coincidence, both attacker and victim were Coast Guard veterans.

According to the official Main Stream Media story, Slager slaughtered an unarmed, model black man, retired Coast Guardsman and father of four, for no reason.

Slager has been charged with first-degree murder, and if convicted will either get life in prison, or the death penalty.

So why bother with Slager? Everyone, Left and (Respectable) Right, agrees that he’s a murderous RACIST monster. Shouldn’t I just concede this one, and move on to a more winnable battle?

Except that for the Respectable Right, of conventional Republicans and glibertarians, there are only surrenders that lead to more surrenders, no matter what the odds or conditions are. What is the term? “French, cheese-eating surrender monkeys”? They sought to sacrifice George Zimmerman for refusing to let Trayvon Martin murder him. They bend over for homosexuals.

And now they are, of course, cheering the prosecution of Michael Slager. Maybe they think that will help them with the Truth and Reconciliation Commission later on.

Some perspective: Although no-one seems to remember this, until 1985, it was still perfectly possible in almost half the states for a cop legally to shoot and kill a fleeing suspect. The theory: the suspect must be running for a reason. And you wouldn’t want a potentially dangerous criminal to escape, would you?

Answer: yes. The Supreme Court ruling that changed that was part of a generations-long war on behalf of colored criminals.

In the 1985 decision in the case of Tennessee v. Garner, written by Justice Byron “Whizzer” White, the majority threw out centuries of common law, bizarrely ruling without precedent that a policeman shooting a fleeing suspect was making a “seizure” under the Fourth Amendment, and that a suspect had the right to flee:

“The Tennessee statute is unconstitutional insofar as it authorizes the use of deadly force against, as in this case, an apparently unarmed, nondangerous fleeing suspect; such force may not be used unless necessary to prevent the escape and the officer has probable cause to believe that the suspect poses a significant threat of death or serious physical injury to the officer or others.”

“[T]he Court effectively creates a Fourth Amendment right allowing a burglary suspect to flee unimpeded from a police officer who has probable cause to arrest, who has ordered the suspect to halt, and who has no means short of firing his weapon to prevent escape. I do not believe that the Fourth Amendment supports such a right, and I accordingly dissent.” [Idem.]

However, today’s brutal post-American reality: Michael Slager might as well hang himself, because he is being made a sacrificial lamb. Here are my preliminary observations on some of the actors in this most recent Narrative-driven drama.

I report on crime and the courts, in which the defendants are typically guilty-as-hell blacks. Their defense lawyers regularly make up the most outrageous racial fairy tales in the attempt to find one racist black juror who will hang the jury. “The [white) victim had consensual sex with the (black) man who led the carjacking-kidnapping-gang rape-torture murder of her.” “The (white) victim arranged, through an (imaginary) prostitute, for my (black) client to carjack, kidnap, and repeatedly rape and sodomize her.”

What’s the line? “Every defendant has the right to a fair trial and a vigorous defense”? Not anymore—at least not where white men are concerned.

I spent five days in a Knoxville court room bearing witness to the 2013 retrial of George Thomas for the Knoxville Horror atrocity that stole the lives of Channon Christian and Christopher Newsom. The killers got Tennessee’s best as their defenders. I watched defense attorney Stephen Johnson lie his head off on behalf of the murderer Thomas, thinking to myself, if that were my duty, I probably wouldn’t do a thing differently.

That’s why I never went to law school.

In an apparent violation of legal ethics, by his own admission David Aylor dropped Slager right after viewing a version (who knows how butchered) of the video of the incident that a helpful member of the MSM had sent him. This was a clear and highly prejudicial signal from Aylor to potential jurors that he thinks Slager is guilty as hell.

Aylor is a defense attorney, not a prosecutor. If every defense attorney who thought his client was guilty, or saw the cards stacked against said client quit, 90% of defendants would have to defend themselves in court.

Following its M.O. since at least the Rodney King case in 1991, the MSM chopped up the bystander video of the incident in order to make the incident look like a cold-blooded murder. The MSM deleted the beginning, in which Scott fought with Officer Slager, and then fought again with him for the officer’s Taser, showed the shooting completely out of context, and either tacked on Scott’s fighting with the officer twice at the end, or not at all.

“News” reports have an unmistakably editorial feel as Social Justice Warrior reporters do not even try to hide their glee over Slager’s prosecution:

The MSM never talks about black defendants this way.

But either withheld altogether, or buried at the bottom of a long article, is the reason Walter Scott fought with Officer Slager: He was a hound dog who had four children out of wedlock, had apparently never married, and was wanted for non-payment of child support, for which he’d been in and out of jail at least ten times. If arrested, he would have gone back to jail, which he had no intention of doing.

(Reports referred to a “fiancé” of Scott, but that’s MSM racial code for a black man’s “girlfriend.” According to the MSM, all black men are about to get married.)

Note that the publicity circus’ current ringleader is PR man Ryan Julison, who is now working for the Scott family after having organized the Trayvon Martin Hoax.[Trayvon Martin story found the media, By Paul Farhi , Washington Post, April 12, 2012]

There are actually two videotapes of the incident, which was remarkably protracted. One is the dashcam video from Officer Slager’s squad car. It shows that Walter Scott had no registration or insurance for the car he was driving, and that he couldn’t keep his lies straight, regarding its ownership. He said, alternately that he owned the vehicle, and that he was in the process of purchasing it. Scott was lying like a thief. (A mysterious passenger was with him.)

Officer Slager was very easygoing, initially, but had to suspect he was dealing with an auto thief.

Do not look for the MSM to research this matter.

Officer Slager apparently tried to use his Taser, but was unsuccessful.

In bystander Feidin Santana’s video, whose order CNN deliberately scrambled, Officer Slager and Walter Scott are seen wrestling on the ground. In the next scrambled installment, they are wrestling standing, with Scott pulling the Taser out of Officer Slager’s hand (the Taser falls to the ground), whereupon Scott takes off yet again, but this time, Officer Slager fires eight times, hitting Scott in the back five times, and the latter drops to the ground, lying on his belly.

The Officer then handcuffs Scott. The MSM has vilified Slager for doing this, but he was merely following standard operating procedure.

Officer Slager then goes back to the Taser on the ground, walks it over to where Scott is lying, and drops it by his body, and then picks it up again.

That sequence was certainly not SOP. But arguably Slager might have been shocked and confused. Note that, by then, a black officer was also on the scene.

Case study: as of my deadline, NRO had published two essays on the incident. One was by liberal staffer Charles C.W. Cooke. Cooke celebrates the video, but has no problem with the charge, calling my sort of criticisms “something of a red herring.” [A Camera Will Mean Justice for Walter Scott by Charles C.W. Cooke, National Review, April 8, 2015 11:53 A.M.]

Retired U.S. Attorney Andrew McCarthy is excellent on impeachment and terrorism, but regarding domestic criminal and constitutional cases…not so much. He described the decision not to prosecute Darren Wilson for shooting Michael Brown to death “a judgment call,” i.e., he would have been just as happy had Wilson been indicted for acting in self-defense against a huge, racist thug who was trying to murder him, and he actually supported the prosecution of Border Patrol Agents Ramos and Compean for wounding an illegal alien/Mexican drug dealer.

McCarthy’s position on Civil Rights charges against Slager is no less peculiar. He advises the Justice Department to back off for now, and pursue Civil Rights charges against Slager, if state prosecutors fumble their trial. But a civil rights prosecution of Slager would be unconstitutional, in any event. [If Obama’s DOJ Really Wants to Improve Community Relations with Police, It Should Stay Out of South Carolina by Andrew C. McCarthy, National Review, April 9, 2015 4:00 A.M.]

This is not exactly standing athwart history (or a post-American lynch mob) yelling stop.

The Over-Charging of Officer Slager:

There is no basis whatsoever for the Murder One charge (willful and premeditated) against Michael Slager for killing Walter Scott. Scott had fought with Slager not once but twice, ran away twice, and Slager acted in the heat of passion.

Participants in the War on Police will say that my qualifiers mean nothing. But they mean everything. While, due to the ridiculous TENNESSEE v. GARNER decision they do not absolve Officer Slager of killing Walter Scott, they are mitigating factors, under which Slager’s alleged crimes should be prosecuted as manslaughter or second-degree murder.

Slager may also be also guilty of obstruction of justice and/or tampering with evidence and of filing a false police report. But that is no legal reason for charging him in a death penalty case. This is simply a politically-driven lynching.

The South Carolina prosecutor, Scarlett Wilson, clearly aims at making an example of Slager for white cops everywhere, and also at pre-empting intervention by the Obama/Holder Justice Department. The overcharging of Slager is of a piece with the persecution of Darren Wilson, the targeted firings of white policemen for petty matters last year following Ferguson, and the recent firings of cops in Ferguson and San Francisco for private, constitutionally-protected speech.

We are going to see new levels of de-policing all over the country.

My belief: Obama and Holder’s goal is, in effect, to make it impossible for normal white men to work as policemen; to purge them from police departments all over the country; and to replace them with unqualified, racially-aggrieved, blacks and Hispanics, while emboldening criminals of color everywhere.

Their goal: the rule of crime.