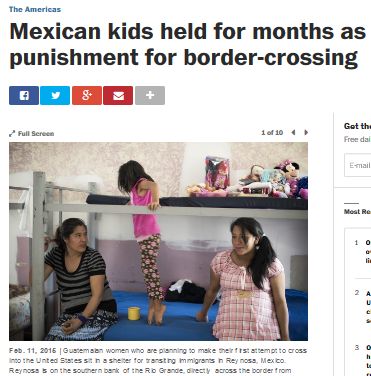 Did you think the Washington Post would illustrate this with pictures of tattooed teenage gangsters?

Is deportation from the U.S. a process or a punishment? In a Politically Correct shell game, the Treason Lobby argues either way, depending which will help it abolish America.

Of course, as Americans, we must regard all removal from the U.S. as a punishment of sorts. People come here to have a better life, either through work, welfare, or crime, or to do harm to the US. Separation from the United States inhibits that. So it is and should be a lesser state, like separation from God.

But there are actual punishments set for entering the United States illegally or fraudulently—they are just rarely imposed. Instead, the overwhelming number of illegal aliens arrested in the U.S. are treated administratively: placed in removal proceedings, or summarily removed. Sometimes this includes being held in custody during proceedings, because illegal aliens increasingly fail to show up for their hearings.[ Undocumented Immigrants Failing To Appear At Hearings Increasing, KRGV-TV, March 20, 2015]

Now look at the Treason Lobby’s contradictory reactions to the deportation of two different groups of Mexicans:

LAREDO, Tex. — Last spring, as Central American children flooded into Texas in a way he had never seen in his three-decade career, Border Patrol agent Robert Harris decided to experiment.

His intelligence analysts estimated that 78 percent of the guides smuggling other migrants were Mexicans younger than 18 — teenagers often hired or conscripted by drug cartels that knew they would not be prosecuted if caught — and he wanted to attack this loophole.

“Why don’t we remove these juveniles from the smuggling cycle?” Harris, the outgoing commander of the Laredo sector of U.S. Customs and Border Protection, recalled thinking.

Now, as a result of that decision, young Mexicans are being held for months without charge in shelters across the United States, sometimes without their parents’ knowledge. Since the program began in May, 536 juveniles have been held — 248 of whom have been deported to Mexico after an average stay of 75 days, according to Border Patrol statistics. Mexican authorities say some of these repeat border-crossers have spent as much as six months in U.S. custody while they await an appearance before an immigration judge.

Note the trick here, typical of the Treason Lobby’s MSM mouthpieces: the illegal aliens in question are not, as Partlow (email him) claims, being held “without charge.” They have been charged—for administrative violations, with the same charging document that all illegal aliens are served: Form I-862, Notice To Appear. They are getting what the Treason Bar itself admits is “due process”—they are formally charged, provided with a free attorney, have a hearing before an independent arbiter, and have appeal rights in so-called removal proceedings before an EOIR immigration judge. (Who are not judges at all but bureaucrats, but that’s another story).

How can this be “punishment”? It is the process that all illegal aliens charged with an immigration law violation go though.

For this group of illegal aliens, juvenile illegal alien coyotes, the process cannot be the punishment: they are objectively guilty of alien smuggling, Title 8, United States Code, Section 1324, Bringing and Harboring Certain Aliens, as well as the underlying crime of entry without inspection.

And here, in contrast, is the Treason Lobby trick worked in the opposite direction: outrage about the lack of “due process,” in the form of formal deportation proceedings, for another group of Mexican illegal aliens.

SAN DIEGO – The American Civil Liberties Union says hundreds, perhaps thousands, of Mexicans who were expelled from the country by immigration officials in Southern California will be allowed to return for chance to make their case to stay in the United States.

A settlement approved Thursday by a federal judge in Los Angeles applies to Mexicans in Southern California who waived rights to a hearing when they were expelled — a procedure known as voluntary return.

ACLU affiliates sued the Department of Homeland Security's secretary in 2013, alleging authorities used deceptive tactics. A settlement was reached in August, but it was unclear until now who would be eligible to apply.

The agreement applies to Mexicans who left voluntarily from June 2009 to August 2014. They will make their case to immigration judges.

Settlement Gives Some Mexicans A Chance To Return To US To Make Case To Remain In The Country Fox News February 26, 2015 by Associated Press

The important point, though: at all times, whether in legal proceedings represented by an attorney or in abbreviated proceedings such as I-275, VR, VD, and ER, the alien is always the oppressed victim of color who must be allowed to stay.

The process is either appropriate or the punishment, depending on the polemical needs of the Cultural Marxist agitating at that given moment.

In the end, their point is that keeping out any immigrant of color is a racist hate crime, interfering with the election of a new people and the displacement of the historic American nation.

And you better believe it or you will be punished.