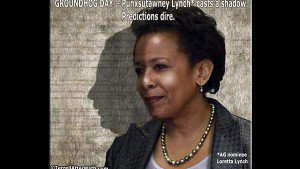 Since Senator Jeff Sessions got the Mulatto Mafia’s Attorney General nominee Loretta Lynch to stipulate that her prejudices are more important than the law of the land the situation remains as I described it on Wednesday: Sessions Sinks AG Nominee Loretta Lynch. No Patriotic Senator Can Vote For Her. So I thought I would have a look to see how the Respectable Right webzines are digesting the issue.

Any Republican Senator, such as Orrin Hatch, who votes for Loretta Lynch to be the next Attorney General, is making a simple and unequivocal statement “I agree with the unconstitutional actions of Barack Obama and Eric Holder.”

Raisley pointed out that President Nixon suffered wholesale defections when he tried to use Presidential power to shut down the Watergate investigation, whereas the Obamacrats have been united in their support for despotism, and appeals for his readers to call Congress to protest.

At Conservative Review Daniel Horowitz is as usual impeccable in Votes for Loretta Lynch and Funding Amnesty are Indefensible January 29th, 2015, precisely expounding the malfeasances in Obama’s actions. Of Lynch’s incriminating response to Senator Sessions he says

Lynch revealed a long-held subtle view held by liberals – that all 7 billion people in the world have a civil right to immigrate here, under all and any circumstance, and enjoy the benefits of citizenship

This is probably true although perhaps the word is implicit rather than subtle.

The lawyers at PowerLine are rather quiet, although Paul Mirengoff astutely caught plain signs of consultant spin in Thank You For That Non-Answer, Nominee January 29, 2015 and concluded

…the evidence strongly suggests that she’s fully on-board with the radical, lawless agenda of Eric Holder, who helped put her in the position to succeed him.

Who knows the real Loretta Lynch better — Eric Holder who smoothed the path for her and President Obama who nominated her, or Republican Senators who know her through her courtesy visit and choreographed testimony?

National Review, unquestionably concerned with how the dogs will take the dog food, posted a rather languid editorial Resist the Lynch Nomination on the 29th. This is fine in itself

What some seem to have forgotten is that at issue in the president’s executive order is not simply America’s immigration policy. The president’s action in November — coming on top of his unilateral, de facto implementation of the Dream Act in the summer of 2012 — rends the principle of separation of powers that is part of the warp and weft of America’s constitutional fabric. Republicans — indeed, all of Congress — should exercise their constitutional prerogative to check the power of a president who has demonstrated his contempt for the very concept of checks and balances. The GOP will suffer merciless accusations of racism and sexism for doing so, but unflattering New York Times headlines are a small price to pay for upholding constitutional order.

...if the Senate votes to confirm Loretta Lynch — in what would be the chamber’s most important vote related to the president’s executive amnesty since its proclamation — what else ought conservatives to think than that it portends many white flags to come?

but since then this large scale multiple-writer site seems to have posted nothing – except for the picture above.

RedState, in keeping with their having purged Daniel Horowitz, has posted nothing at all. Commissar Leon H. Wolf did post Just in Case You Did not Know, You Were Lied to About Executive Amnesty January 28th, 2015 which basically seems to be an effort to demoralize the troops. How else can one interpret concluding

this is exactly what Boehner and McConnell wanted all along. They wanted Obama to take the heat with the conservative base for a policy that they actually support. So they are mounting at every step of the way what has been obviously fake and token opposition to Obama’s plan. And at the end of the day they are going to throw up their hands and say “Aw, shucks, nothing we could have done here, Obama held all the cards!”

…no Republican voter should be deceived into thinking it wasn’t the plan all along.

but not suggesting any counteraction?

To think I first started taking Erick Erickson seriously when he called for a filibuster on Kagan!

Personally, I think Patriots should take the Conservative HQ prescription to heart.

Primary the rats - but hit the phones first!