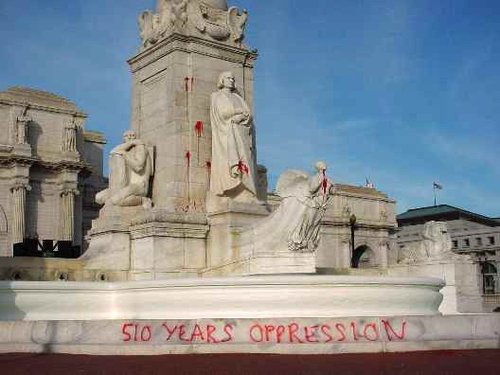 Hello, Columbus! The Day When Hate Speech Is Okay That's the inscription on the monument to Christopher Columbus in front of Union Station in DC. The monument, a really great sculpture group by Lorado Taft, was dedicated in 1912, by people who thought that discovering America,, in the face of great odds and great dangers, was a Good Thing.

Now, of course, people are discovering that Columbus was white, and so it’s okay to hate him. At the top of the page I have a picture of the sculpture group as it was defaced in 2002 by a “Native American” activist. [Credit, Sam Durant.net]

Of course, it’s only okay to hate Americans on October 12. For Mexicans it’s called Dia De La Raza, and Arizona teacher Walter Kehowski, who mailed VDARE.com articles to his fellow teachers in October, 2003 found that it was literally a Federal case (of national origin discrimination.) See my story Angst in Arizona—Caused By VDARE.com? and a note published six years later, in which Alex Kosinski, the good Judge on the Ninth Circuit, finally decided the case was none of the Court’s business.

Searching today’s news for “Columbus Day”, what we find is mostly hatred:

You don’t see that kind of thing on Martin Luther King Day (except here.) Here’s a Video For Columbus Day from the old days that gets a lot of hate comments.

Here are five stories by the late Comanche writer, patriot, and friend of VDARE.com, David Yeagley:

And here are some more stories by American non-Indians, or “white people” as they’re known.

And here’s something from Chauncey Depew from the “Columbian Oration, ” at the Columbian Exposition in 1892, an event in which America celebrated the 400th anniversary of the landing:

This day belongs not to America, but to the world. The results of the event it commemorates are the heritage of the peoples of every race and clime. We celebrate the emancipation of man. The preparation was the work of almost countless centuries; the realization was the revelation of one.

The Cross on Calvary was hope; the cross raised on San Salvador was opportunity. But for the first, Columbus would never have sailed; but for the second, there would have been no place for the planting, the nurture, and the expansion of civil and religious liberty. … All hail, Columbus, discoverer, dreamer, hero, and apostle. We here, of every race and country, recognize the horizon which bounded his vision and the infinite scope of his genius. The voice of gratitude and praise for all the blessings which have been showered upon mankind by his adventure is limited to no language, but is uttered in every tongue.

Neither marble nor brass can fitly form his statue. Continents are his monument, and unnumbered millions, present and to come, who enjoy in their liberties and happiness the fruits of his faith, will reverently guard and preserve, from century to century, his name and fame.

That’s how we still feel here at VDARE.com.