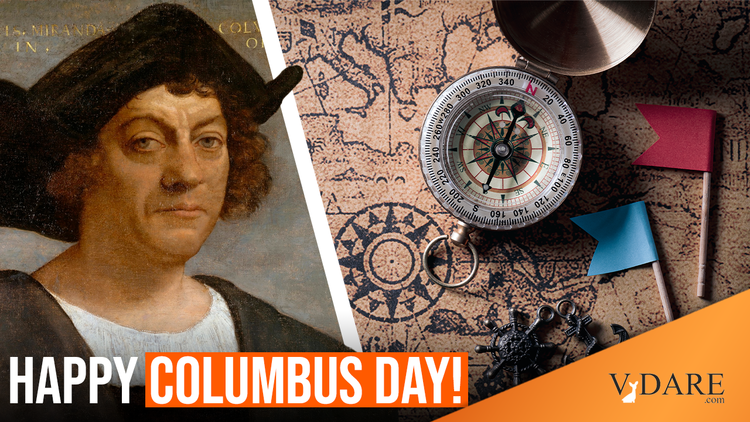 Columbus Is Back in Denver!

Depressed by the election? Here's evidence that things sometimes really do get better too.

The Columbus Day Parade is once again alive and well in Denver, Colorado, despite being shut down by anti-American Leftists from 1992 to 2000. Its return is a credit to the steadfast respect for freedom and American values shown by Italian-Americans in Colorado. Theirs is an untold story of dedication which, if known, every American would support.

In celebration, I decided to go to Denver this year, 2006, and support the parade.

You might wonder: what's a Comanche Indian doing at a parade celebrating the man who brought Europe to America—and hell to the Indians?

But I say the real question is: why blame Columbus for the last 514 years of history in the Western Hemisphere?

If there's to be any objection to what's happened since that fateful day of October 12, 1492 on the island of Lucayos, the fault lies with those native people who accepted Columbus so graciously, not with the handful of foreign, civilian adventurers who came ashore.

I don't blame Columbus; I blame the Taino tribe.

Columbus never met any real American Indians. The Comanche would have buried Columbus alive. Instead, he encountered some weak, peace-loving 'liberal' Indians—the Taino, from South America.

The Taino were fascinated with the white, bearded foreigners and their odd clothing. After all, the Taino wore nothing. And the Taino had no disposition of fear or mistrust. Columbus described them as "very friendly," and said that "they could be much more easily converted to our holy faith by gentle means than by force."

The name "Taino" (tah-ee'-no) was, in the language of the natives, their word for "good," or "noble." Supposedly, the Taino consciously eschewed violence and war. Apparently that's why they migrated north, away from their Arawak relatives of Venezuela. Perhaps they were driven away. Perhaps this is why they gave Columbus the impression that the other Arawak Indians of the islands, the Caribs, were horrid, violent cannibals.

So, the good guys let Columbus in. The peace-loving liberal Taino Indians opened the door to the tragedy of the next five centuries.

I can accept this story. Indeed. So let's not blame Columbus for being an aggressor, but let's blame the Taino for not being willing to fight for their land, for their own people, for the hemisphere.

In fact, I'm rather fascinated with the vision of Columbus. Columbus was a risk taker. Columbus was willing to dare. This is how great things are accomplished in the world.

I thought I'd make a trip to Denver and say that, as an Indian, particularly as a Comanche—a people so well known for "exploration" in the Southwest (along with plunder and hunting!)—I should lend my support to a cultural hero.

While I was there, I learned how deeply older Italians feel about the Columbus Parade. Denver has been celebrating Columbus since 1905. I met an Italian lady there, Mickie, who was born in Brooklyn, NY. Her father was an immigrant, who wanted the American dream for his children. Mickie was in her 70's. She told me, "My father never saw the dream. When Roosevelt declared a national holiday for Columbus in 1937, my father said, 'Well, maybe they'll like Italians now.'" She was so humble and sincere I wished the world could have heard her.

Well, I made sure at least Denver would hear something about this – from me. The Italians and I held a press conference on Monday, October 2, the week of the parade.  Denver TV and news media were there.  ABC affiliate 7 News posted a video report of the conference (hit "search," then type "American Indian speaks in support of Columbus Day"). Rocky Mountain News, the Denver Post, YourHub.com, and Denver's CBS 4 posted several videos about the actual parade. (I was on Mike Rosen's 850 KOA radio show earlier that morning, just before Governor Bill Own.)

I feel the protest against Columbus has been created by men with no vision, with very small minds, and men with a certain parasitical spirit.

There were three representatives from the Transform Columbus Day Alliance in the audience (all non-Indian Leftists of course). I sincerely appealed to their personal lives. "Which of you has experienced anything of the grandeur, the magnificence, inspiration, the glory, of anything remotely comparable to that of Christopher Columbus?"

They were of course, silent. (Afterwards, the Honorary Vice Consul of Italy, Maria Scordo Allen who was present at the press conference told me she had never heard such a perspective before.) I wanted these protesters to see how truly small they appear in reality.

I also questioned them about the effects of their perspective. "Have you considered the effect of your prolonged resentment on young people?" I told them that their negative world view was pernicious. Nothing stifles the natural aspirations of young people than a negative approach to life. Nothing is so crippling to their natural ambitions than a hateful attitude toward life—in the guise of historical justice.

As the "discussion" continued, I heard one of them pronounce platitudes straight from the Communist Manifesto. I said, "What are you, a liberal Commie?" So the news media seized the opportunity to declare that the discussion denigrated into "name calling." (The opponents called me "racist.")

Interestingly, no American Indian Movement representatives, like Ward Churchill or Glenn Morris, condescended to appear at the press conference. I think it is terribly important that we Indians dissociate ourselves from anti-white, anti-American liberal social upheavals. We have enough problems to overcome without associating ourselves with marginal academic riff-raff.

The Italians told me later that the news reports were surprisingly fair, considering those of recent years. That sad fact made me shudder a bit, because I felt some major points were missed, and I was definitely misrepresented in the Rocky Mountain News. I blogged, several times, about my Columbus Parade support, before and after the press conference.

But one glorious fact remains after all this: the Columbus Day Celebration is back.