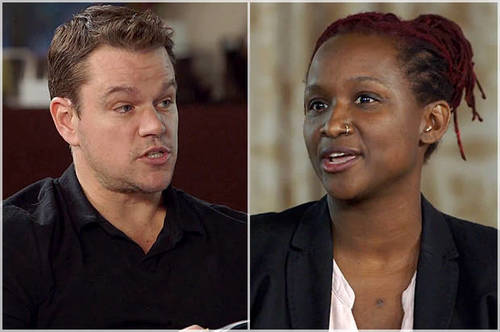 Oh, this is schadenfreude-licious. Outspoken celebrity Democratic activist/donor Matt Damon opened his mouth and let the truth about the left's superficial commitment to "diversity" slip out.

Now, liberal ideologues are furiously whacking the relentless GOP-bashing actor for his "white privilege." There's even a Twitter hashtag—"#damonsplaining"—that erupted this week to mock his unforgivable political transgression.

Here's what happened. Damon (along with his progressive pal Ben Affleck) co-produces the television series "Project Greenlight," which gives wannabe filmmakers the opportunity to compete for a shot at directing their first feature film. The current season's prize script features a man who weds a black prostitute after being abandoned at the altar. On this week's episode of the show, aired on HBO, Damon dressed down black female producer Effie Brown for pushing the judges to give special consideration to a directing duo consisting of a white woman and a Vietnamese-American man.

An offended Brown responded as if the wind had been knocked out of her: "Hooh! Wow, OK."

Damon went on to remind Brown that the rules of the competition called for judging candidates "based entirely on merit." And that politically incorrect principle set his loony liberal friends' hair on fire.

Poor dear. Damon is guilty of a classic Kinsleyan gaffe—accidentally telling a political truth—and I'm enjoying every second of these chickens coming home to roost on his smug little lap. For decades, the "progressive" champions of government affirmative-action policies have used minorities as highly visible Christmas ornaments to assuage liberal white guilt. It's always been for show.

Whether it's the progressives of pallor at MSNBC or the Associated Press board of directors or the top brass at The New York Times, I've pointed out many times over the years that the loudest preachers of manufactured skin-deep diversity work for media and entertainment organizations that fail to practice their own social engineering sermons behind the camera and in their backrooms.

Damon and his ilk routinely attack tea party conservatives as racists and bigots. They savage the GOP for not being "inclusive" enough. They lambaste Fox News for being too "white" and "blonde."

Yet, the University of Southern California's Annenberg School for Communication and Journalism found that "in the top-grossing movies since 2007, there were more than twice as many speaking roles for men as for women." Measured by the gold standard of liberal proportional representation metrics, only 11 percent of those 100 top-grossing films had "balanced casts" (e.g., women representing 45 to 55 percent of the characters). And of nearly 800 directors involved in those movies, only 28 were women, 45 were black/African-American and 18 were Asian or Asian-American.

Hypocritical Hollywood touts its fealty to token racial, ethnic and gender "diversity," but like every major institution dominated by the left, it demands the most extreme political conformity. Conservatives in the performing arts are ostracized, blacklisted and closeted. Conservative minorities are humiliated as sellouts, puppets, Uncle Toms and Aunt Tomasinas.

Meanwhile, the militantly intolerant entertainment industry pays off race hustlers Jesse Jackson and Al Sharpton to mollify the diversity racketeers—without ever having to be held accountable for Hollywood's institutional failure to meet the "diversity" standards they demand of others.