Since the Obama administration failed to reward its illegal alien base with a mega-million amnesty, it has increased its general coddling of foreign lawbreakers, which it hopes to transform into loyal Democrats someday soon.

Unlike Obama’s administrative amnesty activity which is not directly observable, the new deluxe detention centers are easily photographed and look nicer than the schools attended by many people’s kids. One example is the Texas facility shown below that cost taxpayers $30 million: 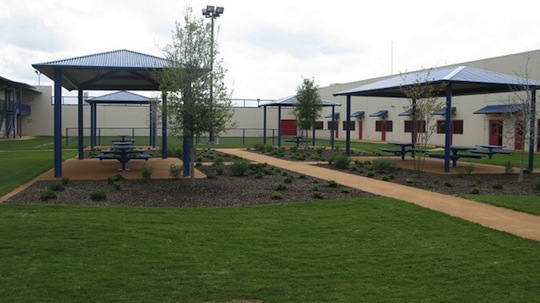 The House Immigration Subcommittee considered the subject on Wednesday, revealing a level of luxury many citizens might find inappropriate for government holding centers.

Judiciary Chair Lamar Smith (R-TX) noted in his statement to the Committee that “Under this administration, detention looks more like recess. While funds for American students’ physical education classes are being cut, the new detention standards expand recreation for illegal immigrants.”

Four panelists testified and expressed widely differing points of view. Jessica Vaughan of CIS appears on the video below at 5:00 in. She observed the government’s extreme TLC toward lawbreaking foreigners compared with its refusal to provide anything positive for crime victims of illegal aliens.

As Vaughan wrote in her full statement:

Meanwhile, those who are the victims of this unlawful activity have no one in these agencies to speak to for for them. Congress should direct ICE to establish a Victim’s Advocacy Unit to address the concerns of those who are victims of crimes and other damaging actions committed by removable aliens. Currently these victims and their families have no voice within the DHS bureaucracy, no avenue to get their questions answered, and no way to help ensure that immigration law enforcement failures that have tragic consequences are not repeated. In fact, ICE appears to have no interest whatsoever in meeting and discussing their cases with surviving family members, much less providing basic information on how they were handled.

Interestingly, Democrats on the committee thought that the detained persons weren’t treated well enough. Apparently they missed the glowing press stories a couple weeks back of how comfy the new detention centers are. For example, NPR reported on March 14: Trying To Make Immigrant Detention Less Like Prison.

The following article was typical in that background information clearly was not researched.

The hearing in front of the Subcommittee on Immigration, Policy and Enforcement was held to review ICE’s standards, which grant health care services to detainees, expand protections against sexual assault, provide more hospitable living conditions and expand access to legal services.

The development of the new standards came after a series of investigations, complaints and reports that revealed abuses in the system ranging from rapes to preventable deaths.

California Rep. Zoe Lofgren said she was “disappointed” to learn the hearing was titled “Holidays on ICE,” a title Texas Rep. Lamar Smith defended in his statement.

“This hearing is entitled ‘Holidays on ICE’ because ICE has decided to upgrade accommodations for detained illegal and criminal immigrants,” Smith said. “While we would all like to be upgraded, we don’t have the luxury of billing American taxpayers or making federal law enforcement agents our concierge.”

Smith said facilities designed to comply with new standards were too expensive and opulent, citing a new $30 million detention facility in Karnes City, Texas that is equipped with cable TV, basketball courts, a library and Internet access.

ICE defends that detention programs like the one in Karnes City are part of a wider effort to decrease costs to taxpayers in the long run by providing safe environments for detained immigrants.

Lofgren told U.S. News and World Report that while Smith has always been anti-immigrant, His comments were some of the most divisive she’s seen in the 17 years she has worked with him.

“He’s been anti-immigrant from the first and he stays that way, but I think that this title might have been a new high on disgusting behavior,” Lofgren says.

While Republicans and Democrats have long disagreed about immigration, experts say increasing partisanship in Congress elsewhere has divided them even further on the issue.

“Immigration politics have gotten more polarized over time,” says Audrey Singer, a senior fellow at the Brookings Institution who follows immigration trends. “Immigration is often used as a wedge issue, even though the public generally in not interested.”

Immigration rights activists says the hearing is an unsettling sign for the future of immigration legislation.

“I think it sort of speaks to the nature of our country and the nature of our Congress that we can’t speak about immigration in a common sense, bipartisan way,” says Claudia Valenzuela, an associate director of litigation at the Heartland Alliance’s National Immigrant Justice Center.