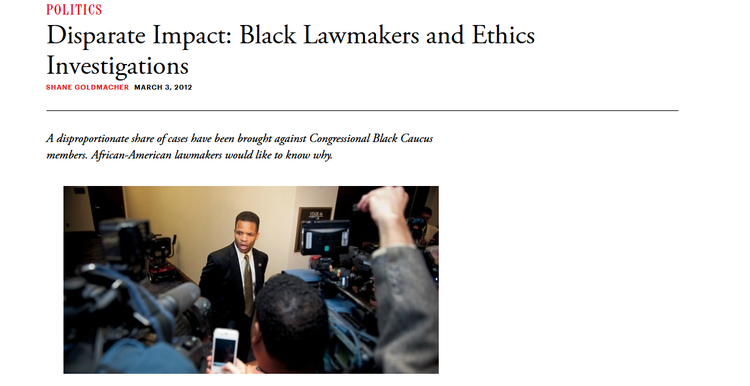 From the Atlantic and the National Journal:

Emanuel Cleaver, a Methodist minister and the chairman of the Congressional Black Caucus, stood up and began searching his desk for a Bible. Cleaver wasn't looking up a particular verse or Psalm. He grabbed the Good Book for emphasis. He wanted to hold it in his hands as he declared, with a firm shake, that the way Congress investigates the ethics of its own lawmakers is horribly broken.

"I think," Cleaver said, "the facts speak for themselves."

The facts say this: African-Americans make up 10 percent of the House, but as of the end of February, five of the sitting six named lawmakers under review by the House Ethics Committee are black. The pattern isn't new. At one point in late 2009, seven lawmakers were known to be involved in formal House ethics inquiries; all were members of the Congressional Black Caucus. An eighth caucus member, Rep. Jesse Jackson Jr. of Illinois, had also been under investigation, but his probe was halted temporarily while the Justice Department undertook an inquiry of its own.

All told, about one-third of sitting black lawmakers have been named in an ethics probe during their careers, according to a National Journal review.

Only two members of Congress have been formally charged with ethics violations in recent years and have faced the specter of public trials — Reps. Charles Rangel of New York (censured) and Maxine Waters of California (investigation ongoing). Both are black. There are no African-Americans in the Senate. Remember the most recent black senator, Roland Burris of Illinois? Reprimanded by the Senate Ethics Committee in 2009.

Those are the facts, as Cleaver said. The question is why so many African-American members have been in the ethics spotlight.

In interviews with more than a dozen members of the CBC, an unsettling thread emerges: They feel targeted. There could be no other explanation, many said, for what they see as disproportionate treatment at the hands of ethics investigators. They describe a disquieting reality of being black in Congress today: a feeling that each move they make is unfairly scrutinized. "We all feel threatened," said Rep. Hank Johnson, a Georgia Democrat, as he sat by the fireplace off the House floor. "If the only reason that you would suffer a complaint is because of your skin color, that is a cause for concern."

In general, the legal doctrine of “disparate impact” — that racial discrimination can be inferred merely from statistical disparities in outcomes — is a version of conspiracy theory thinking. Occamite explanations (e.g., blacks tend to be more crime prone and/or less competent at getting away with their crimes) are ruled out as unthinkable, leaving as the most likely explanation some kind of shadowy conspiracy against blacks.

As we see here, The Atlantic / National Journal takes it seriously enough to devote many pages to a conspiracy theory held by numerous members of the Congressional Black Congress that whites are out to get them.

Conversely, when Larry Summers argued that it wasn't a conspiracy that not many women were tenured professors in Harvard math and engineering departments, he immediately became a Bad Person. Every right thinking person knows that it is too a conspiracy. To try to save his job, he handed $50,000,000 to Drew Gilpin Faust to spend on feminist causes at Harvard. But he still lost his job and, through sheer coincidence, Dr. Faust had somehow acquired enough supporters within Harvard to replace him.