The paper also points out more soberly that a divorce isn’t up to the state alone, but is a complex, nearly impossible national process. (The aftermath of the Civil War saw to that.) And the dollar cost would be ginormous. 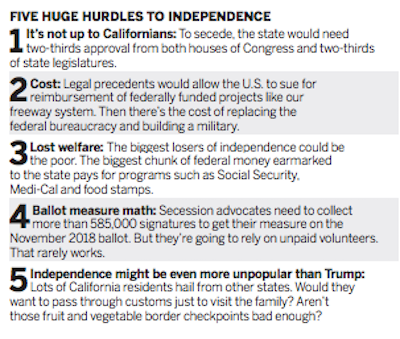 And what’s behind the hysterical refusal to accept the Trump election? Did libs see the election of Obama (a far left black man) as a kind of end-of-history moment and the beginning of a millennium of uber-left open-borders lawless multiculturalism? It seems that way, particularly with all the accusations of racism against Trump — although the R-word is the universal shriek these days.

Plus, an independent California would look very tasty to moocher Mexico. As the Mexican population grows in the state, they would likely squawk for joining up with their beloved homeland. Liberaloons at large are stupid enough to go for it.

Interest in a previously anonymous California independence movement surged following Donald Trump’s election, but leaving the union is not a realistic option

We’ve got more people than Canada, a bigger economy than France, and enough farms to feed half the world and leave the other half stoned out of their minds.

So could California really go it alone? Or is this independence “Calexit” thing just its latest pipe dream?

Despite what you might be hearing, the question is purely theoretical. The only way California can secede from the United States is if the rest of the nation lets us. And despite all the snarky online comments about a latte-drinking, Tesla-driving, water-gun-toting Republic of California – they’re not going to set us free.

Still, for many liberal Californians, Donald Trump’s election made them question their state’s place in the union, said Sherry Bebitch Jeffe, a veteran political analyst at the University of Southern California. Instead of seeing ourselves as steering the nation toward its multiethnic, tech-friendly future, we suddenly feel as if we’re getting shoved backward.

“Right now California is the polar opposite of what is going on politically, culturally and in some cases economically in Donald Trump’s America,” she said.

So it’s no wonder that a 2-year-old movement for Californian independence suddenly went from 500 followers on Twitter before Election Day to more than 16,500 today.

Trump’s election has “been huge,” said Marcus Evans, vice president of Yes California, an organization modeled on a failed movement for Scottish independence. “People used to argue with us when we said that America is failing. With Trump, no one debates that point anymore.”

Last week, Yes California, known to many supporters by its “Calexit” hashtag, filed paperwork for a ballot measure with the Secretary of State’s Office that would set the stage for a vote on California independence in 2019.

The proposition wouldn’t be legally binding, but the group still got a lot more attention for the idea than its last attempted measure – a modest proposal to rename the position of California governor to “California president.”

For Evans, a 39-year-old Fresno resident and former conservative talk radio host, California independence is bigger than Trump. He insists that the state is getting a raw deal from Uncle Sam, which takes more taxes from wealthier states like California and gives proportionately more to poorer ones like Mississippi. He blames Washington — not the tax-slashing Proposition 13 – for the state’s crumbling roads and underfunded schools.

“We have the worst of everything,” he said.

But California actually comes out ahead in its fiscal relationship with Washington, according to the National Priorities Project, a Massachusetts-based nonprofit that bills itself as the “people’s guide to the federal budget.”

A recent study by the group found that California and its businesses fork over about $330 billion in federal taxes, but receive about $350 billion in return. That includes the salaries of federal workers – a line item left out of many studies — said Lindsay Koshgarian, the group’s research director.

The biggest piece of the pie is $193 billion in federal benefits that include Social Security payments, food stamps, unemployment insurance and Pell grants, she added.

California’s annual share of the U.S defense budget is $72 billion, Koshgarian said. That, of course, raises the question: How much would California be willing to pay for its own military – not to mention its own postal service, social security program and diplomatic corps?

“The transition alone would be just sort of mind-boggling,” Koshgarian said. “The sheer bureaucracy that California would have to create for itself is really easy to under-appreciate. There are all these federal workers, and the vast majority of them really do something.”

Many Bay Area residents interviewed in mid-November said they would vote against the secession proposition.

Lauren Wilson, a 21-year-old Republican who voted for Hillary Clinton, sees similarities between the secessionists and the attitude of many of her Santa Clara University classmates who posted on Facebook that they wanted nothing to do with anyone who didn’t vote for Clinton.

“Instead of trying to work together and fix our problems, it seems like everyone just wants to run away because they don’t like what happened,” Wilson said.

California history has been full of crazy, unsuccessful schemes to slice and dice the state. A plan, hatched three years ago by Silicon Valley venture capitalist Tim Draper to split California into six states, died quickly. So did a 2009 proposal from former Assemblyman Bill Maze, a Visalia Republican, to split the state in half to give the conservative Central Valley a bigger say in Sacramento.

The longest-running effort to remake California comes from northern counties that want to form their own Republic of Jefferson and rid themselves of city slickers who call the shots in Sacramento.

Mark Baird, a spokesman for the Jefferson secessionist movement, said the new independence drive puts the “mind-boggling arrogance” of the rest of California on full display.

Still, he hopes it somehow comes to pass. “That way we can separate peacefully and live our lives and leave some of this crazy stupidity that comes out of Sacramento behind us,” he said.

He shouldn’t hold his breath. While the U.S. Constitution doesn’t specifically address states leaving the union, the Supreme Court ruled over a century ago that there is no right to secession, said David Levine, a professor at UC Hastings College of the Law.

The prevailing legal opinion, Levine said, is that secession would have to follow roughly the same process as a constitutional amendment — passage by two-thirds of both houses of Congress and three-fourths of state legislatures.

“That is less likely to happen than Donald Trump appointing Hillary Clinton secretary of state,” he said.

And if somehow it came to pass, California better get a good lawyer, he said. When West Virginia seceded from Virginia during the Civil War, the Supreme Court later ruled that Virginia could be reimbursed for the money it spent building up its infrastructure.

“Would we have to repay the money the federal government gave us for Yosemite and the interstate highway system?” Levine asked. “I understand the frustration, but the Civil War was a really bad precedent.”