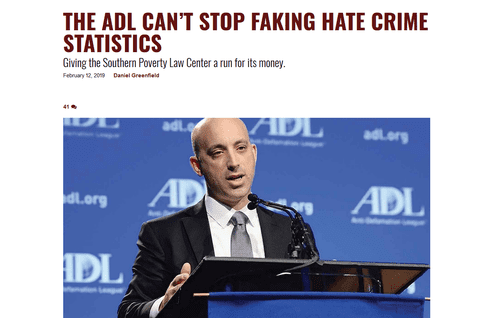 Yesterday's tragicomic hearings in the House of Representatives about the need to censor the Internet so "white nationalists" don't murder everyone were a scandal. As James Fulford pointed out yesterday, the death threats made against American Jews by a black reporter and a disturbed Israeli Jew were used to justify the hearings and for censorship against "white nationalism."

Yet that wasn't even close to the worst of it. The Anti-Defamation League's "Murder and Extremism" Reports were repeatedly used throughout the hearings to build the case that "white nationalists" are America's most dangerous terrorist threat. It was even argued that 98 percent of all "extremist" murders last year came at the hands of the "far right." These reports were the critical piece of evidence used again and again to call for censorship.

Dan Feinreich at the Times of Israel bravely pointed out not long ago that these reports are a "fraud."

A few other lonely voices have pointed out problems with the studies, notably the ADL's habit of lumping "Moorish sovereign citizens" [a particularly idiosyncratic variety of black nationalist] with the "far right."

Greenblatt’s ADL has become notorious for undermining its mission by putting out fake hate crime statistics. And these fake statistics were as surreally egregious as they were confusing...

The ADL’s reports usually contradict themselves. And this one is no exception. It lists murders by Tierre Guthrie  and Malachi Qaadir Dorns, African-American members of black nationalist Moorish groups. While Moorish groups do use terms like “sovereign citizen”, it’s highly misleading to define them as “right-wing”, especially considering the misleading impression that this description creates...

At Breitbart, Joel Pollak (who is Jewish himself) slams the ADL for dishonesty earlier this year.

Notably, the ADL includes the Parkland school shooting — responsible for the largest number of deaths (17/50) — among “extremist-related murders,” even though it admits that “it is not clear” whether the shooter’s white supremacist views played any role at all.

Later in the report, the ADL admits that political ideology was a motive only in a minority of the killings — and, moreover, that the proportion of “extremist” killings attributable to political motives actually declined in 2018...

The ADL’s claim has already been repeated, without qualification, in news articles around the world, as well as by left-wing politicians and pundits exploiting the opportunity to condemn the “right” for political violence.

Now, American Renaissance has a detailed analysis of the ADL's "Murder and Extremism" reports and finds breathtaking dishonesty. Not only does the ADL count murders by "Moors" as attributable to the "far right," but squalid crimes over property or family jealousy are included in the count and framed as part of a rising "far right" movement.

In fact, these reports are so deceptive it is hard to believe they are not deliberately written to deceive. They make no distinction between what they call “terrorism” and what appear to be “hate crimes.” Far worse, they include any killing by anyone the ADL can plausibly call a “white supremacist” or “right winger” whatever the motive. This means that a Kluxer who kills his wife is a “right-wing terrorist.” Likewise, a number of “right-wing” killers have been black...

It could have reported every killing by every black or Hispanic gang member who ever said anything insulting on social media about white people.

What an embarrassing lie, and what dereliction of duty by our elected representatives and so-called "free press." The only "defamation" here is the defamation of white Americans. No wonder Congress needs to censor the Internet so badly. It's the only way a System supported by such obvious lies can keep limping along.