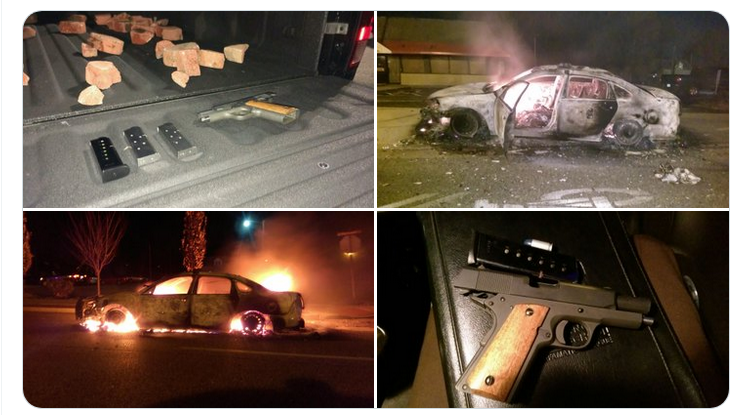 Although VDARE.com patiently explained this summer that The Answer To Race Riots Is Ruthless Coercion. What Is America Waiting For? , Missouri Governor Jay Nixon ignored us and refused to deploy the National Guard. As a result, after a grand jury declined yesterday to indict police officer Darren Wilson in the shooting death of Michael Brown, Ferguson is now ablaze with violence, arson, and undocumented shopping.

But the real story isn’t the collapse of yet another racial hoax—it’s the perseverance of a Main Stream Media-created Narrative about “white racism,” even in the face of all evidence to the contrary.

No educated observer can still maintain that Michael Brown, hands held high in the air, was executed by Officer Darren Wilson. The grand jury declined not only to bring a charge of murder, but even a lesser charge like involuntary manslaughter.

According to St. Louis County Prosecuting Attorney Robert McCulloch (a Democrat): “Even the image of Brown’s surrender may have been a fiction” as several witnesses (all black) claimed Brown ran towards the officer. [Ferguson police officer won’t be charged in fatal shooting, by Chico Harlan, Wesley Lowery, and Kimberly Kindy, Washington Post, November 25, 2014]

Autopsy evidence also showed that Brown was not shot in the back. Michael Brown’s “blood or DNA was found on the inside of the driver’s door, the upper left thigh of Officer Wilson’s pant leg, the front collar of Wilson’s shirt, and on his weapon.” And several eyewitnesses who initially said Brown surrendered “adjusted” their claims or admitted they weren’t even there and were recounting stories secondhand. [Ferguson Grand Jury Declines to Indict In Michael Brown Case, CBSNewYork/AP, November 24, 2014]

Officer Wilson’s riveting testimony has also been released and, as would be expected, matches the evidence. Wilson says that he was in fear for his life from the hulking robbery suspect, who charged him and punched him twice in the face. The young officer had also never used his weapon before. [Michael Brown shooting: What Darren Wilson told the Ferguson grand jury, by Rachel Clarke and Mariano Castillo, CNN, November 25, 2014]

In fairness, one critical detail reported by many conservative and MSM sources last August was that Office Darren Wilson suffered a severe orbital fracture. The pictures show (as I suspected) that this was not the case and that the initial report from Gateway Pundit was not true. [UPDATE: Officer Darren Wilson Suffered Severe Facial Contusions After Severe Beating During Mike Brown Attack, by Jim Hoft, Gateway Pundit, August 19, 2014, updated November 24, 2014]

However, it is nevertheless true that Officer Wilson was physically struck in the face by Michael Brown. Evidence and testimony suggests Brown struggled for Wilson’s gun. And the Narrative that was originally presented—that Gentle Giant Michael Brown was accosted and executed by a police officer for no reason—is simply a lie and has been known to be a lie for some time.

Brown turned out to be a criminal and a thug, given to the constant aggression that’s par for the course in black “communities.” From Officer Wilson’s testimony, it seems the last words of the Gentle Giant were “You are too much of a p*ssy to shoot me.” And there is no case anywhere in the country where someone could expect to punch a police officer and grapple for his weapon and not expect to be shot. If anything, Wilson was remarkably restrained.

Presumably, he should have let the 290lb Gentle Giant pummel him a few more times and then give Brown his pistol to make it fair.

Indeed, even though everything the MSM told us about the case for months has turned out be wrong, most of the coverage in the aftermath has the underlying premise that there has been a great travesty of justice and people are right to be outraged. Protests in other cities were given a largely positive spin. [Thousands Rally Across U.S. After Ferguson Decision, by Sadie Gurman, Time, November 25, 2014] The New York Daily News even had a front page that read “Killer Cop Goes Free,” before it was apparently changed.

But most MSM outlets used more subtle methods, like focusing on the grief of Michael Brown’s mother Lesley McSpadden. McSpadden has previously called for Darren Wilson to receive the death penalty and expressed “disappointment the killer of our child will not face the consequences.” [Brown’s mother screams, sobs over grand jury decision, by Yamiche Alcindor, USA Today, November 24, 2014] Of course, they didn’t mention that McSpadden is also being investigated for alleged involvement in a group beating of people selling Michael Brown T-shirts. McSpadden may be in more legal trouble right now than Wilson.

President Obama’s response was disgraceful. He took the opportunity to wax poetic about “a deep distrust [that] exists between law enforcement and communities of color.” He also ominously warned police to “show care and restraint in managing peaceful protests that may occur.” [Obama Speaks on the Ferguson Decision, by Matt Berman, National Journal, November 24, 2014]. Amusingly, as the President was speaking, CNN showed a split screen with the President on the left and chaos on the right.

Building off Obama’s determination to link what is a local law enforcement matter to a larger crusade for racial vengeance, the MSM is already scrambling to consolidate a new party line. Wilson’s release is, according to reporters, just part of a greater pattern of systemic disrespect against blacks. Race hustler Jamelle Bouie intones,

“[A]ctual justice for Michael Brown—a world in which young men like Michael Brown can’t be gunned down without consequences—won’t come from the criminal justice system.”
[Justifying Homicide, Slate, November 25, 2014]

Well, then where it come from?

The clear implication: it will come from the streets. The neutered St. Louis Police are celebrating that no lives were lost last night, but as with the LA Riots, April 29 – May 4, 1992, there’s no reason to expect the violence will be limited to one night. And the violence in Ferguson seemed almost tailor made to confirm the worst expectations, with flag burnings, the destruction of businesses, and plenty of gunshots, and Americans around the country learning on Twitter about each new building that went up in flame.

Thus the exoneration of Darren Wilson, the revelation of critical evidence, and the conclusion of the legal process has had absolutely no effect on the MSM’s Narrative of an innocent black “child” gunned down by a white cop. Prosecutor Bob McCulloch’s press conference even featured a kind of shaming of the MSM for constantly feeding speculation—which has led to a mini-hate campaign against McCulloch by reporters reacting to his lèse-majesté. [Ferguson Prosecutor Robert McCulloch Gives Bizarre Press Conference, by Alana Horowitz, Huffington Post, November 24, 2014]

Paradoxically, social networking and mass media are actually leading to a dramatic restriction of the public debate. The Internet enables citizens to break the MSM monopoly and expose facts that otherwise would not be known, but power, money, and access are still what determines what most people read and believe. People who know the truth are afraid to speak up for fear of social media flashmobs. Therefore, the media’s utter refusal to back down from their Michael Brown fairy tale, all evidence to the contrary, is actually proving effective. We can expect more protests in Ferguson tomorrow, as well as in other cities around the country.

Darren Wilson, like George Zimmerman, will be a hunted man for the rest of his life. He did his job—and the ruling powers of his country will never forgive him.

The real damage may come to our legal system. Just as the acid of tribalism ate away immigration law, we may be witnessing the beginning of the end of the presumption of innocence in these kinds of crimes. Other prosecutors may not have the fortitude of Bob McCulloch to let justice be done, although the heavens (or at least the Little Caesar’s Pizzerias) fall. Police officers may continue to get some protection because of their powerful unions, but ordinary white citizens will be readily sacrificed for social peace.

The real message of Ferguson: we are seeing multiculturalism itself go up in flames. A polity where the Chief Executive has to address the people over a local law enforcement matter is fatally unstable.

There are plenty more Fergusons out there, tinderboxes ready to be lit the next time a white cop confronts a black criminal. As the Ruling Class has empowered a permanent anti-white Narrative seemingly impervious to facts, this is only the beginning of the violence.

Until the historic American nation can develop a collective identity of its own, there will be more sacrificial victims to the cult of diversity—and the next one might not be so lucky as Officer Darren Wilson.