More information is out about one of Obama's illegal alien kids, Erick Garcia-Pineda, who was released by a liberal Immigration Judge from custody after rolling over the border during the Obama Regime Administrative Amnesty for MS-13 gangbangers.

And the crime he committed in killing Abel Esquivel is continuing to be described as a robbery gone wrong. Well, killing during an armed robbery is not unusual (that is the whole point of using a weapon during a robbery) but this really appears to be a gang hit.

First, the victim, Abel Esquivel, had his photograph in the LA Times, and it looks like he is flashing gang signs in the photo.

Note the placement of the index and middle fingers mimicking an sideways V sign, which is a common gang sign. Then there is the question as to why Esquivel was shot and other not during an alleged robbery spree by the accused gangbangers.

Was this an opportunistic hit? Could be, but in any event bringing people like Esquivel to the United States brings only more crime. All involved were Hispanics—either immigrants or an anchor babies like Esquivel.

ICE agents also asked the local sheriff in May to detain a second man arrested locally who is also charged with Esquivel’s murder, Jesus Perez-Araujo, 24.

Authorities say Garcia-Pineda had been detained by immigration authorities in December and released from custody in April pending deportation. An immigration judge required him to wear an ankle monitor and routinely check in with immigration officials.

He failed to show up for his August appointment, said James Schwab, a spokesman for Immigration and Customs Enforcement.

His ankle monitor was removed when he was arrested on Sept. 3 by sheriff’s deputies on misdemeanor battery charges. ICE says the Sheriff’s Department ignored a request to block his release from jail that day.

So, besides the killer of Kate Steinle, the San Francisco Sheriff's Department appears to be acting as if its purpose is to protect illegal alien criminals, rather than see that the people of California are protected and defy Federal immigration laws.

To add to this support by the City and County of San Francisco and the San Francisco Sheriff's Department for open defiance of Federal law, the State of California has passed a Sanctuary State law that requires the State and all cities and counties to aid illegal aliens to remain in the United States by various actions, in defiance of the Constitution, and the Oath to that Constitution that all State officers take as required by Article IV, Clause 3.

California lawmakers on Saturday passed a “sanctuary state” bill to protect immigrants without legal residency in the U.S., part of a broader push by Democrats to counter expanded deportation orders under the Trump administration.

The legislation by Sen. Kevin de León (D- Los Angeles), the most far-reaching of its kind in the country, would limit state and local law enforcement communication with federal immigration authorities, and prevent officers from questioning and holding people on immigration violations...

Others pointed to the opposition from sheriff’s organizations, saying SB 54 tied officers’ hands, allowing serial thieves, chronic drug abusers and gang members to slip through the cracks. Supporters countered the Trump administration was trying to paint all immigrants in the country illegally as criminals.

They pointed to provisions in the bill that would make hospitals, schools and courthouses safe zones for immigrants from federal immigration authorities at a time of fear for some communities.

It was at the center of a legislative package filed by Democrats in an attempt to protect more than 2.3 million people living in the state illegally. Other legislative proposals and budget deals have expanded workplace protections against raids from U.S. Immigration and Customs Enforcement, and increased legal defense services for immigrants facing deportation and financial aid for students without legal residency.

Unfortunately, the response of the Trump Administration has been ineffectual. Attorney General Jeff Sessions moved against sanctuary cities by ending certain law enforcement grants to the offenders, but that decision was put on hold by a corrupt kritarch. While I expect that decision to be overturned on appeal, that will take time and is not certain,  given that Anthony Kennedy is still on the Court.

What the Trump Administration refuses to do is to take action not subject to vicissitudes of corrupt kritarchs. The Executive Branch has great latitude in the enforcement of criminal and immigration laws. The Executive Branch can make an example of Chicago, Sheriff Vicki Hennessy, or the State of California for their defiance, but the Trump Administration refuses to take that action. This writer previously suggests a new Operation Wetback to make examples of States and localities in defiance of immigration laws. [Mini Operation Wetback, by Federale, Federale Blog, December 16, 2017] As did my inspiration to write on the immigration issue, VDare's own Juan Mann. [Time For Operation Wetback II, by Juan Mann, VDare, February 8, 2003]

All the kritarchs in the world can't stop the Department of Justice from indicting Vicki Hennessy for aiding illegal aliens. Though generally this writer supports law enforcement, in this case it is time for the DOJ to start indicting front line officers and deputies involved in the Sanctuary City movement. In the case of the release of Erick Garcia-Pineda, the DOJ should start with orders to Acting United States Attorney Brian Stretch in the United States Attorney's Office for the Northern District of California for the very public arrest of the San Francisco Sheriff's Department Deputy Sheriff who cut the ankle monitor off of Garcia-Pineda, then indict and arrest the deputies who released Garcia-Pineda, Perez-Araujo, and Kate Steinle's killer, Juan Francisco López-Sánchez, from jail after ignoring detainers issued for all.

In return for their testimony, they will be given sweet-heart deals, but will be required to testify against Hennessy and any other department officials who implemented policies for the release of illegal aliens in order to assist them to remain in the United States. The arrest of the deputies is needed pour encourage les autres to defy illegal Sanctuary City orders and policies. What will follow is the perp walk of Sheriff Hennessy for violating Title 8 USC 1324. 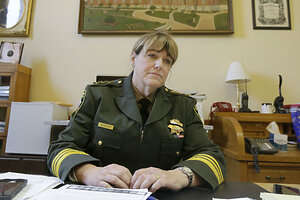 The next step would be for President Trump to order Social Security Administration and Internal Revenue Service officials to provide to U.S. Immigration and Customs Enforcement (ICE) all records related to unlawful employment. Then Acting Secretary of DHS Elaine Duke would order ICE officials in San Francisco, Chicago, and other sanctuary jurisdictions to immediately begin large scale worksite raids in those sanctuary jurisdictions. The purpose would be to cause a panic among illegal aliens, inducing them to leave en-masse. To make them fear, fear the laws of the United States.

Attorney General Sessions can then order the United States Attorney for the Eastern District of California, Philip Talbert, to subpoena all records of illegal aliens who received California Driver's Licenses, commonly known as AB 60 driver's licenses.

Talbert should also be ordered to begin criminal proceedings against Governor Jerry Brown and Jean Shiomoto, Director of the California Department of Motor Vehicles, including indictments and arrests.