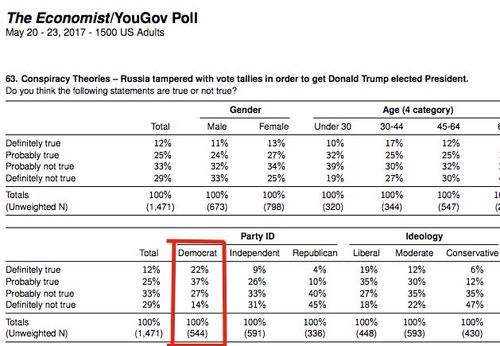 “Hacked” is a popular word nowadays, because Hillary Clinton uses it to insinuate that Russia somehow perverted the 2016 election result. (Successfully—an incredible 55% of Democrats now believe that “Russia tampered with vote tallies to get Donald Trump elected president” according to The Economist/ YouGov poll [PDF] although absolutely no-one in politics has actually alleged this). But it is true that European patriotism has been “hacked”—by the continent’s corrupt globalist elite, who are trying to direct it against Russia, rather than against the existential threat of Third World immigration. Americans take note.

According to our Main Stream Media, enforcing America's immigration laws is akin to brutal dictatorship. Similarly, the MSM is now telling us that telling NATO member countries to pay their bills is akin to dissolving the Atlantic Alliance:

When President Donald Trump lectured NATO members on their contributions to the trans-Atlantic alliance, he demonstrated a lack of understanding about how the group works and potentially alienated the US’ closest allies

The New York Times Editorial Board sneered “the United States is no longer the reliable partner [Germany] and the rest of Europe have long depended on” [Donald Trump’s Insult to History, May 31, 2017].

“Donald Trump is doing damage to the deepest and most broadly agreed foreign-policy interests of the United States,” warned former Bush speechwriter David Frum, who, despite showing courage on immigration, is oddly invested in our current suicidal foreign policy course: “He is doing so while people associated with his campaign are under suspicion of colluding with Vladimir Putin’s spy agencies to bring him to office.” [Trump's Trip Was a Catastrophe for U.S.-Europe Relations, The Atlantic, May 28, 2017]

Of course, it’s unclear how urging more funding for NATO is somehow undermining the Atlantic Alliance. Trump, in his weird way, is simply informing the European nations they can no longer outsource the responsibility for their own defense.

Ominously, a 2015 study showed minuscule numbers of Europeans are even willing to fight for their country, including only 18% (!) of Germans [Percentage of Europeans Who Are Willing To Fight A War For Their Country, Brilliant Maps, January 27, 2017]. If Europeans were actually concerned about the military viability of the alliance, shouldn’t rebuilding the honor of the military profession in Europe be a priority?

Of course, the American MSM is oblivious to all this. Instead, they have unceremoniously deposed POTUS as leader of the “free world” and installed Angela Merkel and Emmanuel Macron.

“German Chancellor Angela Merkel is now the ‘leader of the free world,’ screamed USA Today [May 30, 2017] after the NATO meeting. And when the new French president denounced Russian media outlets during a summit with Russian president Putin, “[t]he press reacted as if he’d all but ripped open his suit and revealed a superhero costume, cape included,” swooned Sarah Wildman at Vox [French president Emmanuel Macron just went after Russia – to Putin’s face, May 30, 2017].

It is not too late for Trump to reaffirm Article 5 and restore good relations with our European allies, but he must do so quickly, clearly and unequivocally. Until he does, watch for Merkel, Macron and other democratic leaders in Europe and throughout the world to define new leadership of the free world.

But what is this “free world?” If it is a place where one has freedom of speech, of association, or the right to peaceably protest government policy, that is not today’s Europe. Germany, for example, certainly cannot be regarded as a “free country” [Police Raid Apartments Over ‘Right-Wing’ Social Media Posts, by Chris Tomlinson, Breitbart, April 7, 2016]

To the EU, and to the American MSM, “freedom” means some vague combination of sexual libertinism and Open Borders, combined with iron-fisted crackdowns on Politically Incorrect speech and religious liberties. “Democracy” means banning anti-immigration political parties and ensuring all important decisions are made by unelected bureaucrats who hate the citizens.

Today, the primary purpose of the European Union seems to be to force member nations to accept vast numbers of Muslim settlers, for no conceivable national interest, and against the will of their own citizens. [Expel Hungary from EU for hostility to refugees, says Luxembourg, The Guardian, September 13,2016]

As is the case in America, it’s obscene for Germany and France to engage in chest-beating about “standing up to Russia” when they have already given away huge swathes of their own territory to the Muslims they imported. The City of Light, a place many Americans once dreamed of visiting before they died, is becoming another slum you do your best to avoid. Planning a vacation to Paris will soon be akin to scheduling an excursion to East St. Louis.

The Euro elite is not really afraid of Russian invasion. If the Russian Army actually rolled west, the only countries really under threat would be Central and Eastern European, like Poland and Hungary—which the Western foreign policy Establishment is accusing of “collaboration” with the hated Russians anyway [The Real Russian Threat To Central Eastern Europe, by Emily Tamkin, Foreign Policy, March 30, 2017].

Russia is instead an ideological threat to the EU—because it is at least vaguely conservative, and, more importantly, nationalist and jealous of its independence.

Besides the blunt ethnic hatred many MSM journalists have for Russia, there also seems to be fury because they think Putin’s media operations are challenging the MSM’s control of the Narrative.  If only! [The Hard Road For Putin, by Gregory Hood, Radix, July 22, 2014].

The EU is something akin to the Holy Alliance, formed after the Napoleonic Wars, in which the continental Great Powers pledged to guard each other’s regimes against Leftism (which at the time also meant nationalism) by controlling information and intervening to squelch rebellions. The main enemies of this supranational alliance, then as now, were the patriotic-minded citizens within the member countries.

But this new Unholy Alliance guards an unelected leadership far more degenerate, destructive and indefensible than the accomplished European aristocracy of the nineteenth century, which boasted luminaries like Prince Metternich and Tsar Alexander I.

Everyone—emphatically including the current European elite—know how this movie ends.

Given current trends, within our lifetimes, the nations of Belgium, France, Germany and other Western European nations will cease to exist as anything more than geographic expressions, because of the sheer force of immigrant demographics.

As Mark Steyn brutally observed after the recent terrorist attack in Manchester:

I asked around Europe all last year: What's the happy ending here? In a decade it will be worse, and in two decades worse still, and then in three decades people will barely recall how it used to be, when all that warmth and vibrancy of urban life that Owen Jones hymns in today's Guardian is but a memory, and the music has died away, and Manchester is as dull and listless as today's Alexandria. If Mrs. May or Frau Merkel has a happier ending, I'd be interested to hear it. If not, it is necessary not to carry on, but to change, and soon - before it's too late.

In today’s Europe, even questioning how The Great Replacement will end is borderline illegal. And instead, as a deliberate distraction from collapse at home, the dwindling ranks of Europeans are being told that they must define their patriotism by their hatred of Russia—a nation that poses far less threat than the many thousands of potential terrorists Europe’s own leaders have welcomed into their homelands.

European patriotism has been “hacked” and turned against itself, in the same way an autoimmune disease turns the protective mechanisms of the body into destructive enemies.

Trump is not, in fact, dismantling NATO. But neither is NATO protecting its member states against the real threat to Europe. That lies inside Europe itself, in Paris, Berlin, and Brussels.

And it’s not necessary to say “bring the war home.” Because the war has already begun —and the casualties are mounting.