The ATLANTIC's David Frum takes a "moment" after the recent Manchester bombing to attack Trump.

As we mourn Manchester, remember: for a moment of ignorant boasting, the president betrayed one of the West’s best sources inside ISIS. 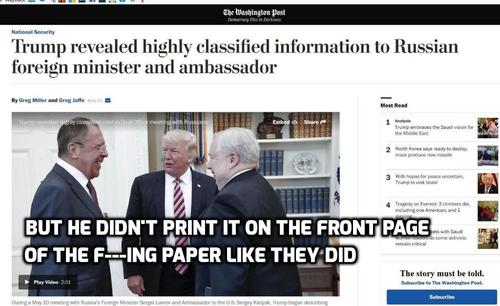 Wrong, of course, as many Tweeters point out—Trump reportedly told Russian foreign minister about ISIS threats. It was the WASHINGTON POST that told ISIS, as Pat Buchanan pointed out last night.

(The text on the graphic at right was added by me.)

David Frum: Take a moment while mourning Manchester dead to remember Trump’s intel leak by Brett T., Twitchy.com,Posted at 11:40 pm on May 22, 2017.

ISIS, by the the way, is claiming responsibility for the Manchester attacks. Trump is the only American President since 9/11 to speak out against Muslim immigration, which helped get him elected.

He did, remember, issue an executive order banning immigrants from the more terrorist Muslim countries of the Middle East, but was blocked by judges acting in ways David Frum himself couldn't stomach: #NeverTrumper David Frum On Why The Hawaiian Judge Attacking Trump’s Travel Order Is Crazy.