Self-destruction By Immigration: The Example From Britain

Great Britain is looking very weak all of a sudden. First there’s the Islamic mass murder of mostly women and girls in Manchester, then the news that Britain is home to 23,000 jihadists.

The Times front-paged the ugly statistic on Saturday: 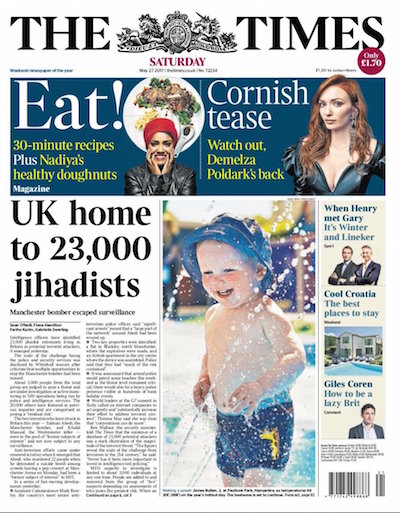 The police have gotten a lot of criticism in the last few days for failure to prevent the Manchester atrocity, but with that many enemies residing inside the country, the authorities are simply overwhelmed by the numbers. The elites’ lack of political will to defend the people is also a major impediment to national security.

With tens of thousands of potential fighters living inside Britain, we should think more expansively about what is possible in the near future, such as a guerrilla-style uprising aided by digital connectivity. The jihadists have already shown their ability to use modern technology. As migrants, many employed social media to facilitate their travels to reach Europe by communicating routes, free stuff etc. In Kiel Germany, a couple of unfriendlies used their phones to assemble an ad hoc group to harass teenaged German girls. There were larger jihad crowds organized for the New Years Eve attacks on women in Cologne and elsewhere.

The hostile Muslims may be barbarians, but they are plugged in to the new internet way of war.

Remember that France had several weeks of diverse rioting in 2005 that a local official called a “civil war.” Following an incident where a couple of Muslims managed to electrocute themselves in a power substation, Muslims burned buildings and cars across France, police arrested nearly 3000 and three non-rioters were killed.

And that rioting occurred before social media became such a facilitator for rapid call-ups of willing fighters. Future sustained violence will be more organized and therefore more effective, from the jihadists’ perspective.

Both France and Britain have growing jihadist populations that may make a modern version of civil war likely.

The sensible thing would be to end immigration entirely and get about deporting every single enemy alien that can be expelled. But that strategy would be too effective, plus the wailing about fairness and diversity and feelings would be difficult for weasel politicians to bear.

UP TO 23,000 potential jihadis are reportedly living in Britain as police investigate the sprawling terror network linked to Manchester bomber Salman Abedi.

Security services revealed the figure as they said up to 3,000 would-be terrorists are being investigated as “subjects of interest”.

The announcement, unusual for security agencies such as MI5 and MI6, highlights the difficulties in investigating potential terror threats, according to insiders.

Amid a reported 500 active terror investigations, one security source told the Mail: “It is difficult because becoming aware that someone is an extremist sympathiser does not make them a live and present danger.

“It is a balancing act – is the intelligence sufficient to push them up the list of priorities or should the focus be on someone else given the finite resources available?”

The warning comes as extra police officers and soldiers are deployed to thousands of events across the UK this bank holiday weekend amid heightened terror fears.

Sick terror group Islamic State, which claimed responsibility for Monday’s attack that killed 22, has called for “all-out war” against the west as the Islamic holy month of Ramadan begins.

But police officials have announced beefed-up security at events such as Saturday’s FA cup final, the premiership rugby final and the Great Manchester Run.

And for the first time armed police will patrol Britain’s trains as soldiers guard the Houses of Parliament, Downing Street and Buckingham Palace.

Film premieres in London have also been scrapped in the wake of the horror bombing.

The UK premiere of The Mummy at Leicester Square was scheduled to take place on Thursday but Universal Pictures said the screening has been cancelled out of respect to the victims.

NHS England has also warned 27 of its major trauma centres to prepare for a potential attack.

An NHS England spokesman said: “Since the MI5’s Joint Terrorism Analysis Centre has announced the threat level has changed from severe to critical, this triggers longstanding tried and tested NHS protocols reflected in this letter which reminds NHS organisations of the precautionary measures they need to take to ensure care is in place should it be needed.”