Years of careful social engineering by the new, Main Stream Media-approved National Football League (NFL), and the promotion of a more athletic, “exciting” type of quarterback by the Main Stream Media, are nearing a triumphant conclusion. A clearer contrast could not be seen than with the two American Football Conference finalists, also meeting Sunday:  the New England Patriots and the Denver Broncos, whose starting quarterbacks will be Tom Brady and Peyton Manning respectively. 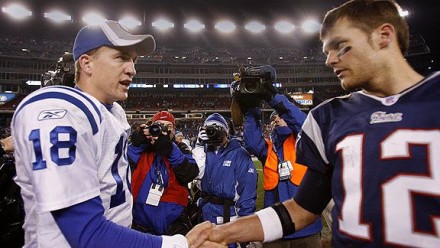 Both are white—two old-style, immobile signal-callers, playing the role of Dennis Quaid’s drop-back passer who was contrasted with Wilson’s/Kapernick’s Jamie Foxx character in Oliver Stone’s prescient 1999 movie Any Given Sunday.

The NFL’s groupies in the MSM are ecstatic about Wilson and Kaepernick:

“It’s like the future of the league,” said John Middlekauff, a former NFL scout and now a radio host in the Bay Area. “They have the opportunity to be a Manning-Brady rivalry for the next 10 years.”

They also represent a shift at the quarterback position. The old guard is led by true pocket passers—Manning, Brady, Drew Brees. But when you look around the landscape, at the young quarterbacks who are excelling, most share a common makeup: They can hurt you with their arm and legs.

Out with the old, in with the new! Oh…does that include the historic American nation?

ESPN analysts and executives must be particularly excited about this development. Their fixation on black quarterbacks dates much farther back than the 2003 uproar over Rush Limbaugh’s comments on the MSM’s self-censorship regarding their inabilities.

You remember that particular PC purge, right? Limbaugh dared to point out on ESPN that the MSM was coddling the Philadelphia Eagles’ black quarterback Donovan McNabb:

"Sorry to say this, I don't think he's been that good from the get-go," Limbaugh said. "I think what we've had here is a little social concern in the NFL. The media has been very desirous that a black quarterback do well. There is a little hope invested in McNabb, and he got a lot of credit for the performance of this team that he didn't deserve. The defense carried this team."

As a result, Limbaugh lost his slot on ESPN, marking a further tightening in sports chat Political Correctness, and subsequently was denied the right to own an NFL franchise. (MediaMatters gloated Stick a fork in Limbaugh's NFL dream, it's done. [October 13, 2009])

(This embargo on criticizing quarterbacks was very much not in place when it came to the white-bread, fundamentalist Christian Tim Tebow).

Well, to adapt Limbaugh’s 2003 term, there is a lot of hope invested, not just in Wilson and Kaepernick, but also in the Carolina Panthers’ Cam Newton and, of course, the Washington Redskins Robert Griffin III. At long last, they might supply the leverage needed to make quarterback just another black-dominated position, like cornerback or running back.

This would complete the transition of the NFL—already roughly 69 percent black, 30 percent white—into just another National Basketball Association (NBA), 78 percent black, where white people just get to be consumers, paying customers and not participants in the actual sport.

TIDES’ study, titled “Racial and Gender Report Card: National Football League,” is issued each year to glowing MSM praise, with much of the discussion centered around the vise whites seem to hold on the quarterback position.

This has long been a key concern for the painfully PC sports media, especially when contrasting the lack of black quarterbacks with the virtual monopoly blacks enjoy over so-called “speed” positions, like receiver, cornerback, safety, and running back.

Could it mean—horrors!—that on average blacks aren’t intelligent enough to memorize every facet of a team’s offense, exactly where each member of the offense is supposed to line up and their assignment for each play, not to mention reading the defense and possessing situational awareness?

Long-time New York Times agitator for all causes black, William C. Rhoden, even wrote a 2007 book on black quarterbacks and the trials and tribulations they face: (Third and a Mile: From Fritz Pollard to Michael Vick—an Oral History of the Trials, Tears and Triumphs of the Black Quarterback. It sounded like the sports version of Eric “My People” Holder talking racial disparities in school discipline.

Way back in 1988, the New York Times rejoiced (prematurely) about the Philadelphia Eagles being the first team in NFL history to not have a white quarterback on payroll. Thomas George’s article, of course, proclaimed that both black quarterbacks were attempting to “dismantle the prejudice that blacks lack the intellect and leadership to be pro quarterbacks.” [Eagles' 2 Black Quarterbacks Give Credit to Coach, August 22, 1988].

Over at the AFC, the Brady-Manning battle on Sunday has the feel of an old Clint Eastwood movie, where two old gunslingers prepare to do battle one final time at high noon. Theirs is arguably the greatest rivalry of modern football

The 36-year-old Brady and the 37-year-old Manning have both had Hall of Fame careers. But both find themselves approaching the end.

Still, Manning is coming off what is statistically the greatest-ever regular season for a quarterback in NFL history. A cerebral assassin, Manning is proof the quarterback position requires maximum intelligence. He doesn’t rely on an offense coordinator talking over a one-way radio into his helmet to call plays: like quarterbacks of old, Manning calls his own plays on the field and will consistently “audible” into a different formation based on how the defense lines up.

Tom Brady continues to be consistently the best quarterback in the league, despite relying on two white receivers—Julian Edelman and Danny Amendola—as his primary offensive weapons. (Brady’s ability to adapt to the season-ending injury to All-Pro tight end Rob Gronkowski, who was key to the Patriots’ offensive strategy, was further proof of his greatness).  Interestingly, Brady’s long-time favorite receiving target, the very white Wes Welker, is now catching passes for Peyton Manning. (And, also interestingly, both Welker and Manning donated the maximum allowed to the Romney campaign—the only active players who did).

In fact, you’ll be hard-pressed to see many white athletes—regardless of position—participating in the Seattle Seahawks-San Francisco 49ersgame. But the Denver Broncos-New England Patriots game will present a much different equation: the historically white-friendly Patriots will play as many as 10 white players, out of 11, on offense.

These two games, as trivial as they may seem to those who eschew professional sports as merely an opiate for the masses, represent something larger for 2014 America and the future of the United States.

The historic American nation is apparently supposed to yield the stage graciously to a new, more exciting and vibrant future, led by a non-white population that we are assured will not only maintain standards, but greatly improve our lives—in the case of the quarterback position, revolutionizing the entire game of football.

With the Brady-Manning matchup on Sunday, we’ll get just a small glimpse of an America that once existed.

With the Wilson-Kaepernick matchup, we get a glimpse of the “America” that will soon exist—if it’s left up to our ruling class.

Paul Kersey [Email him] is the author of the blog SBPDL, and has published the books SBPDL Year One, Hollywood in Blackface and Escape From Detroit, Opiate of America: College Football in Black and White and Second City Confidential: The Black Experience in Chicagoland. His latest book is The Tragic City: Birmingham 1963-2013 .