It's a 23-minute clip, right there on YouTube, and well worth your attention.

Mark takes recently-elected French president Emmanuel Macron and his new political party as the starting point for his commentary. He refers to Macron as "this cipher, this globalist pretty boy." He translates the name of Macron's party, En Marche!, as "Forward!" Mark called this "a vacuous slogan."

This recent Presidential election in France was, said Mark, a consequential election; but the guy who won, "won by pretending it was an election about nothing."

To support his case, and to set the hearts a-fluttering over here on the Dissident Right, Mark then pulled out Steve Sailer's graph, the graph I was talking about two weeks ago, what Steve calls "the world's most important graph." This is the graph Steve made from the U.N.'s 2012 population projections, showing the population of Europe flatlining at around half a billion through the rest of this century while the population of Africa rockets up to over four billion: 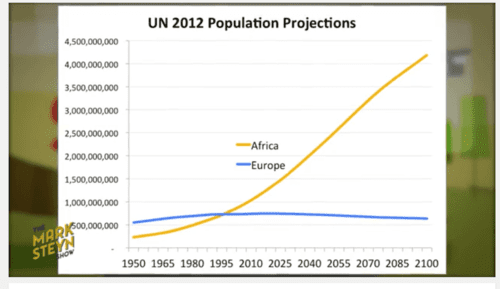 To Mark's credit, he references Steve by name, and agrees with him about the importance of those numbers.

As I told you two weeks ago: this is what we should have at the front of our minds when thinking about the future. This is what our pundits should be talking about: not just pundits on the political fringe, like Mark, or pundits way beyond the fringe, like me and Steve, but the bigfoot guys at the newspapers, magazines, and cable channels.

Ranked on a scale from one to ten, as matters that are important to our future—the future our children and grandchildren will inhabit—that graph is a ten. Global warming is a two or a three; Russian interference in last year's election is around a zero point zero one.

So why don't we talk about it? Why is such a huge, real issue so unmentionable?

Where Europe is concerned, Mark identifies part of the problem as relating exactly to our children and grandchildren—or rather, to the fact that Europeans aren't having any.

The great English economist John Maynard Keynes famously said that "In the long run we are all dead." You can get into trouble—historian Niall Ferguson did get into trouble—for observing that Keynes was a childless homosexual when he wrote that. [ Niall Ferguson apologises for remarks about 'gay and childless' Keynes, by  Paul Harris, Guardian, May 4, 2013 ]  (Keynes later married, though he never did have children.)

There is something in the observation, though. I know I've thought differently about the future since becoming a father. Who doesn't?

That graph—the world's most important graph—looms over the 21st century like a monstrous great crow. Yet we can't talk about it. Or rather, I can, and Mark can; but no-one with much more of a profile than us, can.

In the state ideologies of the Western world, black people are sacred objects to whom whites must defer, Muslims only slightly less so. Nothing negative may be said about these peoples, nor even hinted.

So Mark's gloomy prognostications about Europe being swamped, and European civilization destroyed, by incoming hordes of blacks and Muslims, are out of bounds. In several European countries, including I think France, it would actually be a criminal offense to say such things in public.

That's the state we're in. The real issues, the important issues—vitally important to our children and grandchildren, those of us who have any—may not be openly discussed.

But … world demographics? Why would you be interested in that? What are you, some kind of Nazi?

Now that we've got Mark Steyn talking about the world's most important graph, next we should try to get him helping promote the Arctic Alliance.

It's way past the time when we high-IQ, low-fertility, long-civilized Arctic peoples—the whites and the yellows—can afford to bicker among ourselves, about election hacking or anything else. We should be putting our smart, pale heads together to plan a geostrategy to preserve our nations, our civilization, from the swelling numbers down there in the tropics who seek to displace us by demographically overwhelming us.

On any reasonable scale of badness, though, its badness fades to insignificance, to nothing at all, by comparison with really really bad ideas: ideas like continuing mass Third World immigration, or restarting the Cold War with Russia.

A nation can survive having a foreigner of doubtful loyalty in charge of one of its law-enforcement agencies, but it can't survive having its population replaced by alien peoples. If that happens, the country is no longer what it was. It's a different country.