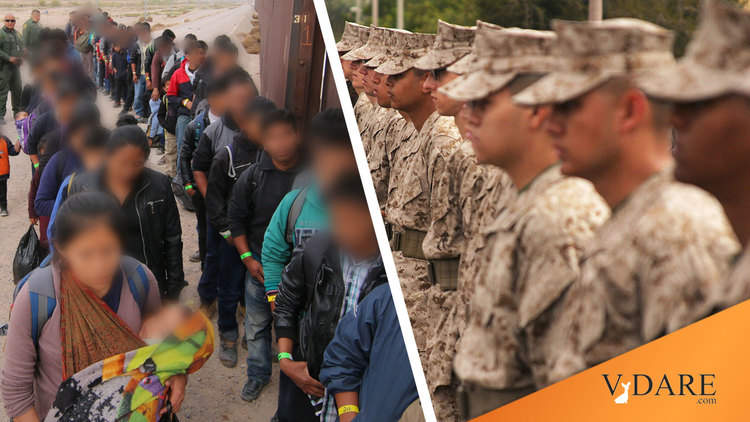 Democrats Want To Legalize Illegals To Serve In The Military

Congress wants to pass yet another illegal-alien Amnesty before the GOP takes over the House of Representatives in January. The latest sellout would stop the deportation of non-citizen veterans and their families. The House passed the bill 220-208 last week, with just three Republicans voting for it. Upshot of this latest from the Treason Lobby: Use the military to help dispossess and replace the Historic American Nation.

Naturally, advocates deceptively titled it the “Veteran Service Recognition Act,” knowing that neither a congressman nor a senator would want to vote “against veterans.” And the title hides the bill’s true aim from the public. It requires the Homeland Security Department to identify non-citizen veterans, and for DHS to consider their service records during deportation proceedings. Additionally, it allows these non-citizens to stay in America until their deportation proceedings are concluded. Worse still, it permits DHS to bring back previously deported vets. One of the bill’s sponsors, Democratic Rep. James McGovern of Massachusetts, says the bill will “improve our immigration system” and clear up backlogs. It’s the right thing to do, he says, and even the American Legion supports it [Democrats push bill to let illegal-immigrant veterans gain citizenship, by Caitlin Doornbos, New York Post, December 6, 2022].

A major part of the bill is protecting criminal aliens from deportation as long as they served in the military. A foreign vet convicted of a crime can stay or return to the country as long as his criminal history doesn’t include an “aggravated felony” conviction or five DUIs. GOP Rep. Michelle Fischbach told the Post’s Doornbos that serious crimes such as “illicit trafficking, trafficking and firearms [and] human trafficking” would not be deportable offenses. Democrats killed amendments adding more criminal convictions to the list of deportable offenses. The bill also allows those non-citizen service members who are discharged for bad conduct to gain a pathway to citizenship, a major change from past policies that excluded that privilege.

Considering just what the bill’s sponsors envision, it’s looking at just how many foreigners serve in the military, and just how big an Amnesty could be. Make no mistake, the number is staggering, and the military wing of the Treason Lobby wants even more.

Mark Zuckerberg’s Treason Lobby FWD.us estimates that 700,000 veterans are foreign-born and that 45,000 immigrants are active duty. Here are two more eye-popping numbers: 5,000 immigrants enlist annually; 148,000 have earned citizenship through military service during the past 20 years. Of course, FWD.us bellyaches that the POTUS 45 Trump made it harder for foreign vets to naturalize, and the Biden Regime has yet to reverse these changes [5 Things to Know About Immigrants in the Military, FWD.us, September 14, 2022].

As if that’s not bad enough, the number of foreigners in the military might grow because it faces a severe recruiting shortage. This problem is likely a result of the military’s increasing wokeness, but the Pentagon isn’t about to make itself less anti-white or pro-”transgender.” Instead, the Pentagon wants to recruit more foreigners to make up for low enlistments [Pentagon Considers Using TikTok, Illegal Immigrants To Solve Military Recruitment Problems, by Micaela Burrow, Daily Caller, June 28, 2022]. The military is also prioritizing Hispanics with Spanish-language ads and recruiting drives [Military recruiters are increasingly targeting Latinx students for enlistment, by Roberto Camacho, Prism, September 19, 2022].

Leftists love that idea. In May, retired Lt. Colonel Margaret Stock [Email her], an open-borders immigration lawyer, argued that what the “U.S. military needs is an infusion of immigrants.” Stock bemoaned that the foreign-born compose 13.5 percent of America’s population, but only 4 percent of military personnel. The solution is to resurrect an idea she crafted for the Bush administration. Of course, all illegals must be amnestied to bolster military numbers:

Under President George W. Bush, I piloted an idea called the Military Accessions Vital to the National Interest (MAVNI) program. The idea was to fast-track the path to military service and, ultimately, to citizenship for lawful immigrants with skills the U.S. military needed. These immigrants did not need a green card, but were required to possess such skills as foreign-language proficiency or U.S. medical licenses and to be willing to serve for eight years. …

Programs such as MAVNI are necessary to make up for the declining number and quality of American recruits. And there is a further and broader solution: Our lawmakers could boldly address the need for reforms across the U.S. immigration system, from the asylum process to refugee vetting to legalizing agricultural workers and dreamers, to make it easier for immigrants to get green cards.

[What the U.S. military needs is an infusion of immigrants, Washington Post, May 25, 2022]

The demographic challenges and declining number of eligible recruits is a national security threat from within our own borders at a time of global instability, a domestic labor shortage and multiple crises facing the usual pool of younger military recruits. Our leaders must act now with the urgency that this demographic threat demands.

Another idea from Democratic Arizona Rep. Ruben Gallego: allow illegals signed up for Deferred Action for Childhood Arrivals to serve in the military. Illegals could join the military from 2008 to 2017, but now, DREAMers, even those in DACA, are barred from enlistment. Gallego claims it’s a “national security issue” to bar them [Dem Rep Wants Illegal Immigrants To Join Military, by Philip Caldwell, Washington Free Beacon, September 30, 2022].

Packing the military with foreigners is, of course, madness, and might just be a national security threat itself. Anyone who doesn’t think so should recall Major Nidal Hasan, the deranged second generation Muslim who murdered 13 people at Ford Hood in 2009.

As for the veterans Amnesty, Republicans rightly think it’s imprudent, and, again, deceptive. “It leads the public to believe we are looking at a bill that would recognize the service of our veterans,” Fischbach told Post’s Doornbos. “But once again, you take a closer look, it becomes painfully clear that this is another push for open borders.” For the Senate, a good sign, again, is that only three Republicans voted for this bill. That’s a much smaller number than the Republicans who voted for the two Amnesty bills last year, when nine Republicans voted for a “DREAMer” Amnesty and 30 voted for an illegal-alien farm workers’ Amnesty. Prospects for such Amnesties to pass the Senate look middling, if not dim. Likewise for the veteran Amnesty, given its paltry GOP support in the House.

The three Republicans who voted for it are an interesting bunch. One is Illinois Rep. Adam Kinzinger, a departing Never Trumper who spends most of his time ranting about fellow Republicans. Another is Florida Rep. Maria Elvira Salazar, perhaps the most aggressive Republican immigration booster in the House. She proposed her own Amnesty earlier this year that fortunately went nowhere. Pennsylvania Rep. Brian Fitzpatrick is also awful on immigration. While he didn’t cosponsor Salazar’s Amnesty, he backed the DREAMer and the Big Ag Amnesties. He is also one of the few Republicans to campaign on granting Amnesty. “The human dignity and human rights of all undocumented immigrants, particularly children, must be respected and protected,” his campaign website says. Note what he calls illegals: “undocumented immigrants.”

Immigration patriots should be confident that the veteran Amnesty won’t pass the Senate. If it does, it goes back to the GOP-controlled House, which will kill it next term. But the problem will remain as long as our military’s recruitment woes worsen. More generals and politicians will demand immigrant recruits to compensate for the wokeness that is driving away white recruits, who tend to be conservative. The real solution to the low recruiting is to eradicate Critical Race Theory and gender ideology in training.

But the Pentagon and the Democrats favor immigration as the solution because it forwards the Great Replacement. In this case, they would dispossess and replace white Americans in the military, perhaps the last public institution in which the Historic American Nation has any influence.