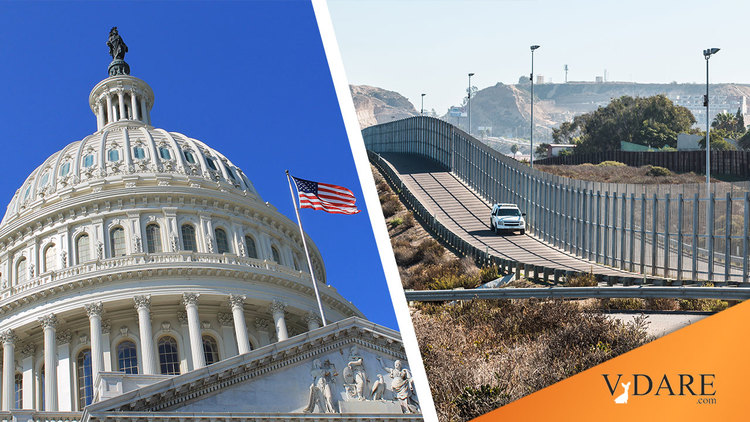 What Can The Republican House Do On Immigration? A Lot, Even With A Small Majority

So, results, for the most part are in. The Republicans will have a disappointingly narrow majority in the House. Well, that is all immigration patriots need. A majority of one is all they need to impose patriotic immigration reform. That is,  provided the Speaker of the House is determined in his agenda and is willing to discipline members of his party. But is Kevin McCarthy an immigration patriot? Not really. Is immigration patriotism good for him and the Republican majority? Yes. And it will serve to defeat a reinvigorated Joe Biden in 2024? Again, yes. The name of the game will be acting with determination and not being thwarted by lies from the Lügenpresse.

The authority of the House of Representatives to effect immigration patriot measures is based on two unique powers given to the House by the Constitution. The first is the Power of the Purse, all spending bills must originate in the House, so the wording and riders are under control of the majority from the beginning of the budgetary process; the second is that Congress has plenary power over immigration through legislation.

All the arguments that immigration is related to foreign policy and under the control of the presidency are much bunk. The only power the President holds over immigration is that given to him by legislation.

So, what can the Congress do with its near absolute power to effect change in immigration policy, immigration enforcement, and border security? Quite a lot, and let’s start with the current zerg rush on the border.

What specifically can the House do by imposing changes through the budgetary process? First, through amendments to either necessary budget appropriation legislation or other must-pass legislation, usually supplementary budget legislation to cover shortfalls or other emergencies, such as any upcoming bills for disaster relief or war funding, the House can finish building the wall. This time make it a double wall, along all 2,000 or so miles of the southern border and add barbed wire on top of and along the wall.

Next, through amendments, Congress can restrict or end parole and release of illegal aliens into the United States that the Biden Regime is using to flood the nation with illegal aliens who cross the border with Mexico. The current Zerg Rush Administrative Amnesty is based on the decision of the Biden Regime to allow illegal aliens into the United States by either the parole authority, much abused, given to the Department of Homeland Security (DHS) or through a new quasi-authority, prosecutorial discretion (PD), based on the newly created DHS Form I-385, Notice To Report (NTR).

The NTR was previously referred to as a Call-In-Letter, which was known in the immigration enforcement community as a Run Letter, because illegals who receive them usually abscond from their residence, leaving no forwarding address. The legacy Immigration and Naturalization Service (INS), then U.S. Immigration and Customs Enforcement (ICE) would send letters to illegal aliens telling them to report for a review of their immigration status. The letters were basically ignored and served to give notice to the alien that he was subject to arrest, and the would then make an effort to disappear. Since then the NTR has been used to release illegal aliens who crossed the border with Mexico with the idea that they would report to an ICE office for processing. Most do not appear, though ICE has a new computer system to schedule them for their appearance at the ICE office. Supposedly this is for placing the illegal aliens in removal proceedings, but in reality they are just registering for the next amnesty, which will be an Employment Authorization Document (EAD) Amnesty. Most illegal aliens who show up to their appointments are given PD, then given EADs, then the eventual Social Security cards, and driver’s licenses.

What the House can do is prohibit the parole or release of any alien who enters the United States without inspection, illegal entry, a violation of Title 8 United States Code Section 1325, Improper Entry By An Alien, requiring all aliens who enter the United States over the land border with Mexico or Canada, or by sea from either, to be returned immediately and without appeal or review by the courts, to Mexico or Canada. Language should be included to make violation of this provision a criminal offense by any official ordering a violation or violating the law.

The provisions can also be imposed retroactively on those who entered prior to these provisions being implemented. As a backstop, the House by appropriate rider to a budget bill can expand Expedited Removal to all aliens other than Lawful Permanent Residents (LPR). Another provision could order ICE SVU, ICE Homeland Security Investigations (HSI), to actively enforce immigration laws in the interior, ending the current amnesty for illegal aliens who have already arrived, mandating arrests of criminal aliens and mandating the wide implementation of work-site enforcement.

Congress could also end both the Biden Regime Administrative Amnesties and the still ongoing kritarchy amnesties that are still ongoing from the 1986 amnesty.

Another major policy area where illegal immigration can be tackled by the House is the ongoing abuse of Temporary Protected Status (TPS). Through language in any must-pass bill or budget appropriation, the House could suspend TPS by ending any current grant, restricting future grants, or even terminating the program.

In fact, the sky is the limit for a strong-willed House on immigration. With the rise of must-pass bills riders and amendments, that avenue can be the vehicle for serious immigration reform. The question is will Kevin McCarthy step up?