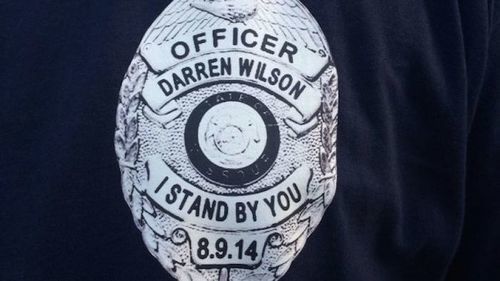 Pictured above: A T-Shirt worn by Darren Wilson supporters.(August 9,  2014 was the date of the attempt on Wilson's life.)

What did the massive six-month FBI investigation discover?

According to the Washington Post, "after canvassing more than 300 homes and reviewing physical, ballistic, forensic, medical and crime-scene evidence" and examining "Wilson's personnel records, audio and video recordings," Justice concluded Wilson told the truth about what happened that Saturday in Ferguson.

Officer Wilson is innocent of the endless libels and slanders in the press and on television, and by street demagogues and the pack of liars who, under oath, told a St. Louis County grand jury that Brown had his hands up, crying, "Don't shoot!" when Wilson cut him down.

The liars, however, will not be called out, nor will the perjurers be prosecuted. For Holder says, in the words of the Post, that "the discrepancy" between what happened and what the liars testified to "was due, in part, to a deeply rooted pattern of racial bias in the police department that had left the Ferguson community polarized."

Holder is saying that we must cut slack for folks who lied to get an innocent cop indicted for murder, because their community had been badly treated by Ferguson cops and courts.

And what about the nights and days of rioting, looting, arson and anarchy in Ferguson and beyond following the death of Brown?

Holder has an explanation for that, too.

"[A]mid a highly toxic environment, defined by mistrust and resentment [of police], stoked by years of bad feelings and spurred by illegal and misguided practices, it is not difficult to imagine how a single tragic incident set off the city of Ferguson like a powder keg."

This, said Holder, was the root of the rage in Ferguson.

When a powder keg goes off, there is a single explosion. And one can understand how, in the first or second night after the death of Michael Brown—originally seen as a shooting by a berserk cop who unloaded his weapon in broad daylight on a teenager—this could set folks off.

But this lawlessness went on, week after week after week, and involved not only rioting and rampages in Ferguson, but the blockage of streets, malls and stores, hundreds of miles away, up to Christmas.

And this rampant criminality was accompanied by the complicit silence of the president of the United States and his attorney general.

When, ever, did either come down hard on the hoodlum element that exploited Ferguson?

Yet, while Wilson may be innocent, says Holder, the Ferguson police department and courts are steeped in white racism.

The proof of this? Though African-Americans are 67 percent of the population of Ferguson, they account for 93 percent of all arrests.

But these figures prove nothing. According to the FBI crime statistics of recent years, though African-Americans are 13 percent of the population, they account for one-third to one-half of all violent crimes.

In Washington, D.C., African-Americans are half the population. But they are responsible for a huge percentage of all the robberies, rapes, assaults and murders, and especially the interracial crimes of violence.

What should it be any different in Ferguson?

And if Ferguson is such a racist hellhole, why have black folks moved there from St. Louis, and why did only 6 percent of African-Americans go to the polls in the election prior to the Brown shooting?

Does that sound like a community on fire with resentment over a racist city regime?

As evidence of the racism in the Ferguson Police Department, Justice produced, seven, count 'em, "seven racist e-mails," said the Post. Here, to the Post, are three of the most horrible:

"A November 2008 e-mail, for instance, stated that President Obama could not be president for very long because 'what black man holds a steady job for four years?' Another e-mail described Obama as a chimpanzee. An e-mail from 2011 showed a photo of a bare-chested group of dancing women apparently in Africa with the caption: 'Michelle Obama's High School Reunion.'"

This is it? The FBI plowed through eight years of emails from the Ferguson P.D. and came up with this? And for this, Ferguson goes into the history books alongside the Sand Creek and Fort Pillow massacres?

In its March 5 editorial, "A Chilling Portrait of Ferguson," The New York Times bewails the "entrenched racism in the Ferguson police force."

But the real story of Ferguson is the entrenched bigotry that propelled a mob-like rush to judgment by journalists and race hustlers that ruined the life of an honest cop who did his duty and told the truth.

In this version of "To Kill a Mockingbird," Darren Wilson is Tom Robinson—the victim of anti-white racism—and St. Louis County Prosecutor Robert McCulloch is Atticus Finch.

Think Hollywood would be interested in doing this terrific story?