A Law Enforcement Veteran On The Latest Ferguson Rioting 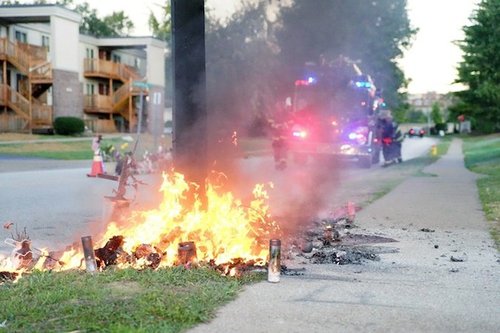 From: Francis Girard [Email him]

In Ferguson, they are back at the looting again. I believe, with the weather getting cooler, crowds of blacks will be losing steam soon. The “organizers” are still here and they put out their daily batch of BS, but the people they are attempting to stir up have the attention span of third graders.

The current “issue” was the burning of the Michael Brown Memorial which has been (illegally) erected on city property and in the city right of way along a city street.[Ferguson Unrest Resumes After Michael Brown Memorial Burns Down, by Adam Chandler, TheWire, September 24, 2014] The so-called memorial consisted of a haphazard bunch of notes, cards, flowers, banners and Teddy Bears piled up near where the incident occurred. There were also dozens of candles in the pile, often burning with open flames near the rest of the rubbish. Who could see this one coming? The “memorial” caught fire.

The police were called and the first officer there called the fire department who came and sprayed water on the mess. The local media idiots rushed in and began interviewing people they could find in the area. They would ask them what they thought happened.

At first no one seemed to have an answer. However, the “organizers” began several new story lines. Initially, the “KKK” somehow burned the memorial. This didn’t catch on as even our media morons had a hard time pushing a story line that would have white guys, in broad daylight, in a mostly black area where almost no one has job and almost everyone mills aimlessly around all day, light the memorial on fire and then escape unseen.

That was dropped cold and then officers were accused of starting the fire. That didn’t catch on, either. It lost steam for the same reasons the first narrative failed.

Finally, something they could get angry about began. We started to see blurbs like, “We are here in Ferguson where people are demanding answers. People still hurt and angry over the body of a black teen left in the street for hours are demanding to know why police officers stood by and watched as the Michael Brown memorial burned.”

By evening, a group of mostly St. Louis hoodlums and thugs and protest organizers gathered in the area. They broke into and looted a business which had already been looted in the first go around. It is owned by a black woman who is a single mother. She works hard and has several employees and feeds and cares for her family (without the assistance of the welfare system) as she is (you guessed it) a single mother. The hair weaves and hair care products have decent value on the black market (no pun intended)!

When police responded to the burglary/looting of the store, group of blacks began chanting and throwing things (really not all that unusual in black neighborhoods). It lasted a couple hours and lost steam as the temperature dropped to about 50 degrees. Early on while it was still warm and cameras were rolling people went down to get on TV. They lost interest near midnight and went home get warm at our expense in government housing with heat subsidies.

And that’s why, in the Grand Jury on the Michael Brown case, the judge granted the prosecutor’s request for an extension until January. The reason given was the volume of evidence and time it will take to get some evidence back.  This is BS, but it worked.  The real reason is quite simple.  Blacks don’t riot in winter!  Crime picks up in the spring and boils through the summer and early fall and then tapers off dramatically during winter for the exact same reason.

Most of the people committing violent crime don’t like cold and snow.  Most violent winter crimes are committed indoors or from cars.

By postponing the Grand Jury until January, they can hope to avoid a riot in case the jury gives the wrong answer.

The writer has been involved in law enforcement for thirty years.