Is Ferguson Our Future? 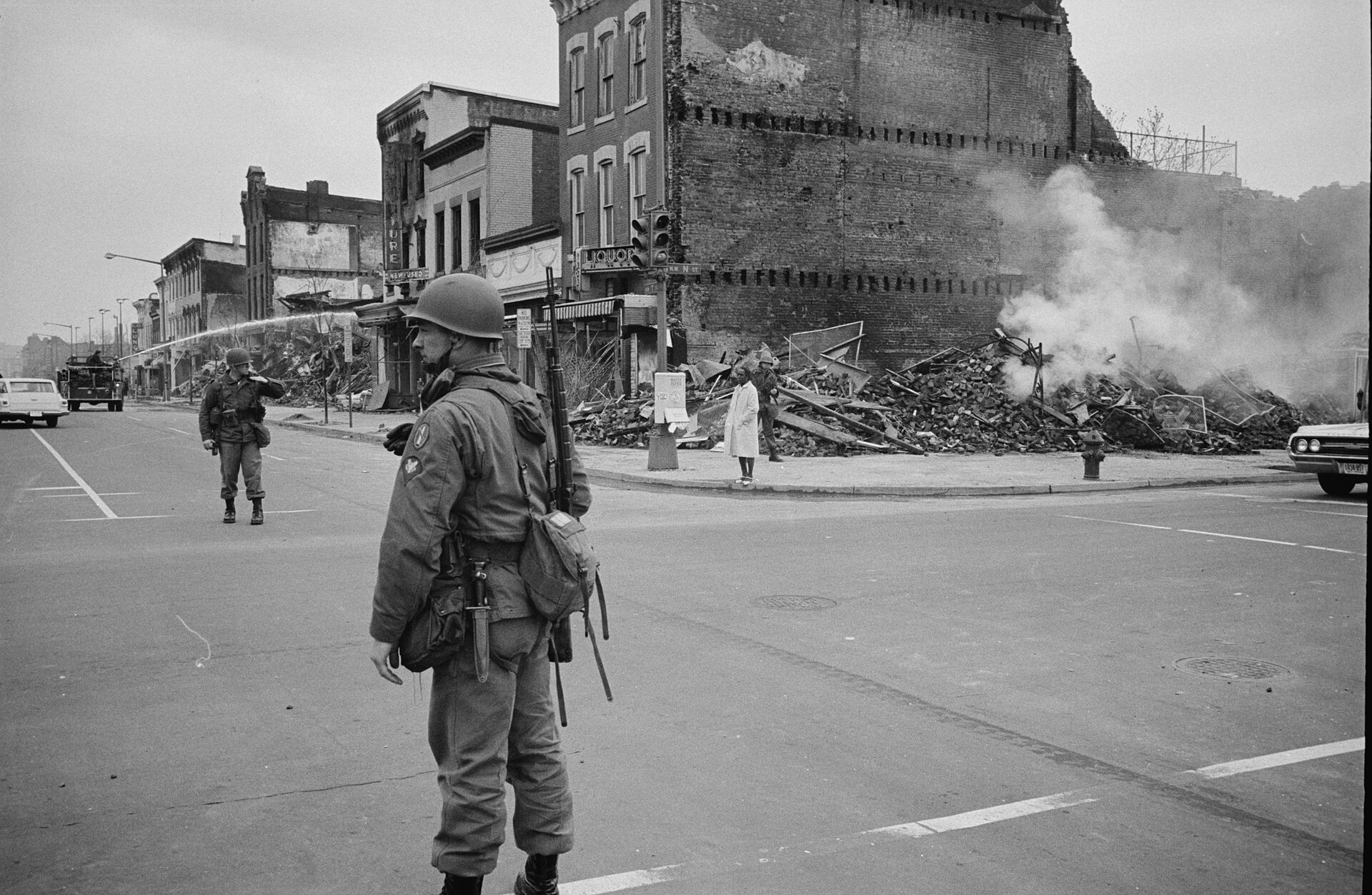 Washington DC, during the  Martin Luther King Riots of 1968: not a "militarized" police officer, but an actual soldier.

"America is on trial," said Rev. Al Sharpton from the pulpit of Greater St Mark's Family Church in Ferguson, Missouri.

At issue, the shooting death of Michael Brown, Saturday a week ago, on the main street of that city of 22,000, a neighbor community to Jennings, where this writer lived in the mid-1960s.

Brown, an 18-year-old African-American, was shot multiple times by Darren Wilson, a 28-year-old white police officer with an unblemished record in six years on the force in Jennings and Ferguson.

From his patrol car, Wilson ordered Brown out of the street where he was walking and blocking traffic. A fight followed. Wilson appears to have been punched in the face. One police report says that there was a struggle for the officer's gun.

According to Brown's companion, however, after he was first shot, he threw up his hands and yelled, "Don't shoot. I surrender." Then Wilson gunned him down.

According to one of three autopsies, Brown was shot six times, once in the top of the head, which may suggest he was charging the officer when gunned down. A second St. Louis County autopsy found marijuana in Brown's body.

What we are witnessing in Ferguson today, and nationally, is not only a collision of reported facts, but also a clash of visions about America.

In Sharpton's vision, America is a country where white racist cops harass, assault and gun down young black males, and Brown's execution is the latest outrage. Many media echo his indictment and accent the facts that support this preconceived narrative.

Disrupting this portrait and particularly outrageous to Sharpton was the release by the Ferguson police chief of a videotape of Brown stealing a $44 box of cigars, 15 minutes before he was shot dead, and manhandling and menacing the store clerk trying to stop him.

Sharpton contends that officer Wilson did not know of the "shoplifting" that was irrelevant to the shooting, and that release of the tape was a moral atrocity to smear the character of the dead teenager.

But while that tape may be unrelated to the shooting, it does testify to the mindset of Michael Brown that morning and to his respect for the rule of law. Ought we not know that?

Then there is the rival vision of America rooted in a separate reality. It is that in America today, police, like Darren Wilson, are the first responders and last line of defense, willing to risk their lives battling the criminal elements that threaten us and our free society.

Moreover, violent crime in America—assault, murder, robbery, rape—emanates disproportionately from the black community, and especially the young male members of that community.

Crime rates, conviction rates, incarceration rates all testify to this truth. If cops are more on guard when encountering black males, is it not because, given the crime statistics, they have more to fear from them?

Do not the weekly news reports from Barack Obama's hometown of Chicago, where black-on-black violence is pandemic, also testify to this?

Decades ago, U.S. newspapers, which used to publish the race of both victims of crime and perpetrators, decided to stop doing so. They felt that this was the kind of news people have no need to know.

These conflicting visions are not exclusive to race. Many liberals share Sharpton's vision, while many black folks move out of home communities to escape the scourge of crime.

Indeed, if Ferguson in the North County is a racist enclave, why did so many African-Americans move there from overwhelmingly black North St. Louis?

And if only three of the 53 cops on the Ferguson force are black, is that due to race discrimination? The chief says he has sought to recruit blacks and asked the Justice Department for help. Is this untrue?

We are told that of six members of the Ferguson city council only one is black, while two-thirds of Ferguson's population is black. Yet, last week, we learned that the black voter turnout in local elections in Ferguson in 2013 was 6 percent.

When St. Louis County, to stop the violence and looting last week, sent cops into Ferguson with armored personnel carriers and assault rifles, they were denounced for militarizing law enforcement.

"Tell them to remove the damn tanks," ordered Eric Holder. The county complied and a kinder, gentler law enforcement ensued.

And the looters and rioters went on a three-night tear over the weekend forcing Gov. Jay Nixon to call out the National Guard.

Nevertheless, the violence in Ferguson is child's play compared to Watts in '65, Newark and Detroit in '67, and 100 U.S. cities including Washington, D.C., after Dr. King's assassination in '68. In those riots, great cities were gutted, dozens were killed, and thousands arrested.

Detroit never recovered. And that is the future that beckons us all if our first demand today is not for peace and order, and then for justice for Brown's family and Darren Wilson, according to the rule of law.