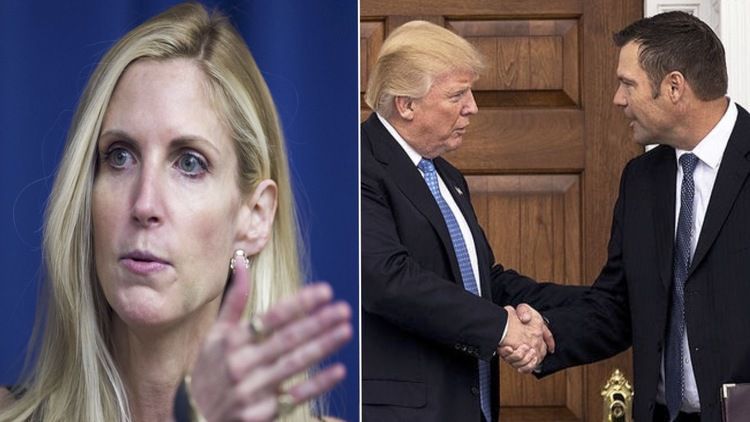 Can Kris Kobach Win In Kansas In 2020? Sure—If Trump Doesn’t Betray Him 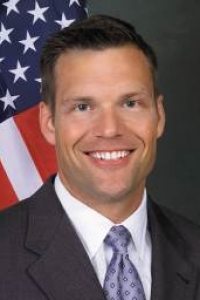 Kris Kobach has cemented himself as a top contender in the 2020 Kansas GOP Senate primary thanks to a September 18 high-dollar fundraiser hosted by Peter Thiel and Ann Coulter in New York City [Peter Thiel Holds Fundraiser For Kris Kobach at NYC Apartment (Featuring Ann Coulter), by Charlie Nash, Mediaite, September 19, 2019]. He is, of course, the top choice for immigration patriots. But he faces the usual threat: The GOP Establishment and the Beautiful Losers of Conservatism Inc. have unsheathed their knives. Despite Kobach’s close ties to President Trump—or perhaps because of them—the GOP elites, hating his immigration patriotism, are eager to run a big name “conservative” against him. No one has emerged, but whoever it is, The Watcher thinks Kobach can prevail. After all, he bested the GOP Ruling Class in 2018 to win the party’s nod for governor. For a win next year though, he needs The Donald’s endorsement.

The big hitters in the anti-Kobach effort show just how serious they take him. The National Republican Senatorial Committee threw shade on Kobach when he announced in July. “Just last year Kris Kobach ran and lost to a Democrat. Now, he wants to do the same and simultaneously put President Trump’s presidency and Senate majority at risk,” said NRSC spokeswoman Joanna Rodriguez. “We know Kansans won’t let that happen, and we look forward to watching the Republican candidate they do choose win next fall.” [Republicans torch Kobach for Senate run, by James Arkin, Politico, July 8, 2019]. (Arkin also reported that the Senate Leadership Fund, closely tied to Majority Leader Mitch McConnell, doesn’t like Kobach either).

Official GOP types don’t usually denounce serious candidates. Then again, this is Kobach we’re talking about, and his NRSC critic is a professional Hispanic, as glance at her Twitter feed and LinkedIn page reveals. She toiled for two years for Sen. Marco Rubio’s office and was an intern at his Reclaim America PAC.

NRSC also produced a dubious poll that showed Kobach’s losing to a Democrat. Released a day before the Thiel fundraiser, it was a transparent attempt to undermine him [Internal poll shows Kobach trailing Democrat in Kansas Senate race, by Tal Axelrod, The Hill, September 18, 2019]

Disregard it. The sample size was small and it doesn’t specify who was surveyed. It was taken a month before Kobach announced, which as Kobach campaign chief Steve Drake said, was 18 months before the election. The biggest problem was the source: the anti-Kobach NRSC.

Allied with the NRSC: Pat Roberts, the retiring senator Kobach would replace (NumbersUSA rating in this Congress: F-). He parroted Rodriguez: “It seems to me if you have just lost a statewide race, that the chances of you winning another statewide race would be very difficult…I think it’s going to be uphill” [Roberts says Kobach has ‘very difficult’ path to Senate; Pompeo the favorite if he runs, by Bryan Lowry, Kansas City Star, July 9, 2019].

Regardless, Kobach can win. He crushed opponents for secretary of state in 2010 and 2014 with nearly 60 percent of the vote both times. He lost a close gubernatorial race last year, but that wasn’t entirely his fault. He faced a Blue wave that drowned other Republicans in Red states. And the GOP elites, notorious sore losers, undermined him. Former Governor Bill Graves, former Senator Nancy Kassebaum, and several other prominent GOP hacks backed the Democrat, Laura Kelly [The Battle for the Soul of the Republican Party Is Still Raging in Kansas, by Russell Berman, The Atlantic, October 9, 2018]

Kobach’s other major obstacle was the previous governor, Sam Brownback. Brownback implemented the Koch Brothers’ dream agenda—such as massive tax cuts—that was supposed to spur Kansas’ economy. Instead, it is blamed for wrecked the state’s finances and led to severe cuts for schools and public infrastructure. Brownback barely won re-election in 2014. In term two, he was one of the least popular governors in the country. [Sam Brownback of Kansas has been dethroned as the nation’s least popular governor, by Hunter Woodall, The Kansas City Star, April 11, 2017]

Brownback’s disaster hurt Kobach, but the GOP beau monde didn’t blame Brownback, of course. He too is part of the smart set and adopted its cosmically stupid ideas. To blame him would blame themselves.

Unsurprisingly, and not insignificantly, Brownback is a huge immigration booster and touted Amnesty. He earned an appalling D from Numbers USA for his long congressional career, which included helping derail immigration reduction in 1996.

Kobach’s last handicap in that losing race: it was 2018, not 2016 or 2020.  Trump wasn’t on the ticket, so Kobach didn’t have  a coattail to grab. No-one can fire up the base like Trump. He won Kansas by 20 points in 2016 [Kansas Results, The New York Times, August 1, 2017]. He’ll win by a similar margin again in 2020 and likely guarantee victory for the Republican Senate candidate, whoever it is.

Why do the Cuckservatives hate Kobach? Above all, because he’s an immigration patriot. The Cucks claimed Trump would lose big in 2016 because of his America First stance on immigration. Refusing to learn from experience, they think Americans in general and Republicans in particular want more Brownbacks. No, they don’t.

So no unelected politician better represents the GOP base on immigration better than Kobach. But who do party leaders want?

Secretary of State Mike Pompeo is one preferred candidate [Mike Pompeo fuels speculation about Senate bid with (another) trip to Kansas, by Deirdre Shesgreen, USA Today, September 6, 2019]. Senate candidate Pompeo would have busloads of cash, top name recognition. And his candidacy would put Trump between Scylla and Charybdis: Endorse Kobach and drop a loyal former cabinet official, or endorse Pompeo and dump an immigration patriot. Alas, the Watcher would not like to bet on the outcome.

Pompeo has yet to declare, though he has until next June to decide. But a Pompeo effort looks less likely by the day The only reason he would give up being U.S. foreign policy chief is if he thinks Trump will lose in 2020. And now he’s ensnared in Trump’s impeachment melodrama, which makes a Senate run logistically awkward as well as giving Democrats opportunities to smear him.

The other possible but undeclared candidates are non-threats—except Rep. Roger Marshal, a two-termer who touts himself as a real conservative. He represents the largest district in Kansas, the 1st, which launched both Roberts and Bob Dole. He can earn the Establishment’s approval and has his own large base of support. [Western Kansas congressman opens Senate bid to block Kobach, by John Hanna, Associated Press, September 9, 2019]

NumbersUSA give Marshall a career B grade, but like most Republicans he is weak and unpredictable on immigration. In 2017, he said he opposed the border wall, reducing immigration, and deporting young illegals. America, he averred, needed more low-wage guest workers [Congressman breaks with Trump on border wall, young immigrants, by Dion Lefler, The Wichita Eagle, June 2, 2017]. He’s slightly changed his tune since then and now says he wants a border wall.

Another possibility: Kansas Senate President Susan Wagle, an Establishment Republican who wangled a meeting with Trump’s people and has tried to position herself as a “strong pro-Trump conservative” [Wagle’s roadmap to U.S. Senate: stick close to Trump, push back hard against Kelly, by Bryan Lowry and Jonathan Shorman, Kansas City Star, April 17, 2019].  At least Wagle supports a border wall—or says she does. [Susan Wagle: Making the argument for a border wall, by Susan Wagle, The Hutchinson News, Sept 5, 2019]

Schlapp’s candidacy would be disastrous, given his questionable lobbying and immigration boosterism. Check Michelle Malkin’s new book, Open Borders Inc. for more on that. His wife, Mercedes, a Cuban-American, was Trump’s director of strategic communications, and now works for the Trump campaign. But Schlapp has become a Trump sycophant and just might trump Kobach.

The problem for Kobach in getting Trump’s support: Someone in the White House is apparently not fond of Kobach. He wasn’t made immigration czar, after all; instead Ken Cuccinelli was chosen. The 2018 loss didn’t help Kobach either.

If Trump takes a powder on Kansas and doesn’t endorse, that too would hurt Kobach. Trump’s endorsement secured the 2018 gubernatorial primary for him. Yet Trump’s endorsing anyone else would betray not only Kobach, but also his base. Voters put Trump in the White House on Kobach’s agenda, not Schlapp’s or Pompeo’s.

As for Kobach’s support among real conservatives, it’s solid. The Thiel-Coulter bash shows he has plenty of wealthy conservative donors ready to back him. Sources tell the Watcher that Steve Bannon and the Mercer family also back him. It’s also likely that Tucker Carlson and other top conservatives will pull for Kobach—support he’ll need to overcome the emerging GOP Establishment perfidy.

Kobach’s taking the oath would be a signal victory for immigration patriots. Trump can virtually guarantee it.