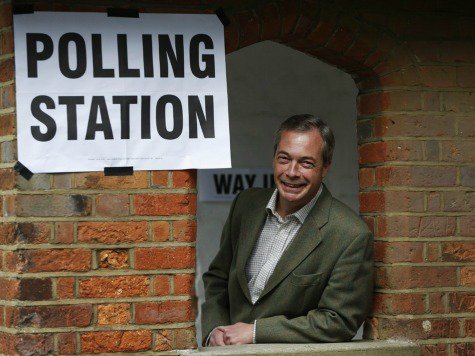 Nigel Farage, leader of the surging United Kingdom Independence Party, thinks that American conservatives may have to form their own populist third party.

“I have no idea what the Republican Party stands for,” Farage said at the Breitbart News Embassy on Capitol Hill. “I meet lots of individuals within it who want it to say one thing or another, but collectively it’s pretty blurry, it’s pretty unclear,” Farage said of the Republican Party in the U.S. “If I was living over here, I would say to myself alright number one we’ve got to reclaim our party—we’ve got to take it away from being safe and establishment, because that way you’re never going to win because the Democrats have certain built-in advantages. If you are unable to reclaim your party, you might have to do a UKIP.”

More importantly, Farage understands that the critical obstacle in the way of the American Right is the stranglehold of major donors on the GOP.

There’s no serious talk in grassroots circles of a third party movement, but Farage said that could change if there’s a “watershed moment”—like the passage of amnesty for illegal aliens into law, or a major policy embraced by the establishment half of the GOP that is in direct contravention to what conservatives believe. Farage said there's still a fighting chance in the U.S. that conservatives can eliminate establishment-minded Republicans and save the GOP from them, but that time has long since passed in the U.K.

Unfortunately, the critical difference here is that many of those who claim to speak for the grassroots American Right are some off the worst offenders when it comes to pushing amnesty and mass immigration. It’s not just the Republican Party that’s the problem – it’s Conservatism Inc.

The Tea Party, which started out with such promise, was deliberately sidetracked onto wonkish economic issues. Instead of fighting illegal immigration, Conservatism Inc. directs the American Right to waste time, resources, and credibility by fighting stupid battles like making sure fast food companies have a sacred right to cheap labor.

For example, though Farage met with the heroic Laura Ingraham and America’s Senator Jeff Sessions, his other interlocutors included Senator Rand Paul (who is hardly an immigration patriot) and former Bush staffer, political consultant, and new chairman of the pro-amnesty American Conservative Union Matt Schlapp. Schalpp amused himself in the past by lecturing conservatives on the need to “embrace Hispanics” after Mitt Romney’s Beltway Right driven defeat. [Election aftermath: GOP soul-searching: ‘Too old, too white, too male’? by Jonathan Martin, Politico, November 7, 2012] Don’t look for original thinking from the ACU anytime soon.

UKIP isn’t just the right wing of the Tories – it’s an independent political force defined by its strong stances on getting out of the European Union and opposing mass immigration. These stances appeal to Labour and Liberal Democratic constituencies as well as Cameron’s milquetoast and misnamed Conservatives.

If there was to be a serious American third party, it would need to be led by credible figures with a grassroots following willing to break decisively with the Conservatism Inc. by taking an explicit stand against mass immigration. It would need to challenge Beltway Right economic orthodoxy. If it’s just another resurrection of the Beltway Right, it would simply be the same old dead end.