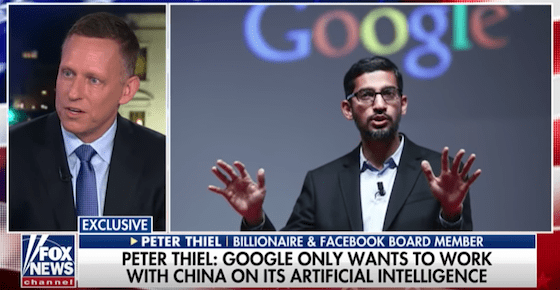 Peter Thiel is a rare conservative in Silicon Valley, so his viewpoint about Big Tech issues is unique. He recently voiced alarm that the leftists who run the Google company are co-operating with Red China rather than the United States

He was a speaker at the National Conservatism Conference on Sunday and had three questions for Google:

“Number one, how many foreign intelligence agencies have infiltrated your Manhattan Project for AI?

“Number two, does Google’s senior management consider itself to have been thoroughly infiltrated by Chinese intelligence?

“Number three, is it because they consider themselves to be so thoroughly infiltrated that they have engaged in the seemingly treasonous decision to work with the Chinese military and not with the US military… because they are making the sort of bad, short-term rationalistic [decision] that if the technology doesn’t go out the front door, it gets stolen out the backdoor anyway?”

Tucker Carlson was the keynote speaker at the conference, so it worked out that Thiel appeared on his Monday show to discuss Google’s relationship with China.

Peter Thiel made serious charges against Google during his interview with Tucker Carlson. 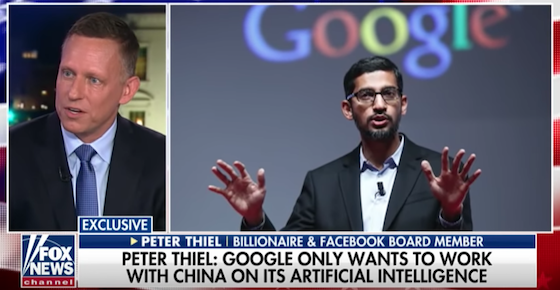 Thiel’s charges have gotten the attention of President Trump who said on Tuesday the administration will investigate whether Google operated improperly with Red China.

In fact, Tuesday was not a great day for Google because the Senate Judiciary Committee held a hearing where Senator Ted Cruz and others grilled spokeman Karan Bhatia over the company’s search bias and censorship. In addition, a panel of critics appeared which included Dr. Robert Epstein who has developed unique techniques to investigate Google’s subtle but powerful election meddling.

Here are the video and transcript from Tucker’s discussion with Peter Thiel:

TUCKER CARLSON: Peter Thiel cofounded Paypal. he was one of the very first investors in Facebook. If anyone knows about the power of big tech and its potential dangers, it’s Peter. So it means something when he warns that Google, the world’s most powerful company, has become a threat to American national security. They may even have even committed treason, he says.

While speaking at the National Conservatism Conference in Washington yesterday, he warned that Google may have been infiltrated by Chinese intelligence and ought to be subject to immediate investigation by the FBI and the CIA. We are happy to have Peter Thiel join us here tonight, Thanks a lot for coming on.

What did you mean when you said that?

PETER THIEL: Well, it was just in the form of a set of questions I asked. Artificial intelligence is something people talk about nonstop in Silicon valley, but they almost never talk about its dual use; if it’s real, if it’s a real thing, it can also be used by the military, it will be will be weaponized in all sorts of ways, and it’s an important national security question as to who has it.

There’s this very peculiar background where google is working with the chinese communist government, and not with the US military so the Project Maven was a decision not to work with A.I., with the U.S. military, but they’re working with the Communist Chinese, and so the question is, what in the world is going on there?

I think the Chinese are confident enough, the Ministry of State Security is likely to have infiltrated Google, and I think the Google management has sort of a decision of either letting the software go out the front door, or figuring, it will get stolen anyway and go out the back door.

CARLSON:  When you say you believe that Chinese State Security is likely to have infiltrated Google, what does that mean?

THIEL:  Well, if you say you’re building a Manhattan Project for A.I., don’t you think that would attract the interest of foreign intelligence agencies?

It’s just hidden in plain sight.  And then — well, I think there are sort of all these ways that Chinese nationals are engaged in espionage in the U.S.  It’s understandable that China is doing that. They see themselves in a very serious competition with the U.S., but we’re not particularly on our guard about it, and if you have sort of a series of super futuristic tech projects that you’ve broadcast to the whole world, it’s at least a suspicion. And then the weird fact that’s indisputable, is that Google is working with Communist China, but not with the U.S. military on its breakthrough A.I. technology.

CARLSON:  Why is that?

THIEL:  Well, that’s the question.  I think one explanation is they figure they have to, because if they don’t give it to them through the front door, it will get stolen through the back door.  So the first answer is they have to.

And then I think of course, there’s probably you know, a broad base of Google employees that are ideologically super left wing, sort of woke, and think that China is better than the U.S.  Or that the U.S. is worse than China.  It’s always — it’s more anti-American than anything.

CARLSON:  Always.  But this is, by definition, a threat to American national security, as you point out.  So if Sundar Pichai was sitting right here, what would you say to him?

THIEL:  Well, I would say answer my three questions.  How many foreign intelligence agencies have infiltrated Google?  Have the Chinese, in particular, infiltrated?  And why are you working with Communist China and not the U.S.?  What is the reason you’re doing that?

CARLSON:  Why do you think that — the questions you raise, and this is not in any way to minimize their importance — are kind of obvious questions; why hasn’t the US government ascertained the answers?

THIEL:  Well, it’s possible that there are people in the U.S. government looking into it and they haven’t told us.  But yeah, I think the FBI and the CIA would be the natural places to look into it.  The FBI would look at it from the domestic side; the CIA would look at it from the outside and would try to look at seeing if from the outside, their people, you know, controlling people inside Google.

CARLSON:  So if someone who’s — this is almost rhetorical — but as someone who’s built a lot of companies, as you have, do you think it would have been possible to create, to incubate and grow a company like Google in China?

THIEL: I think the U.S. is still better at innovation and at starting things, but it certainly can be copied and replicated. And something like this is true of all the breakthrough technologies we have.  Most of them are still originating and developing in the West, but they don’t give us much of an advantage if they get transferred in a matter of a few years, if not a matter of months.