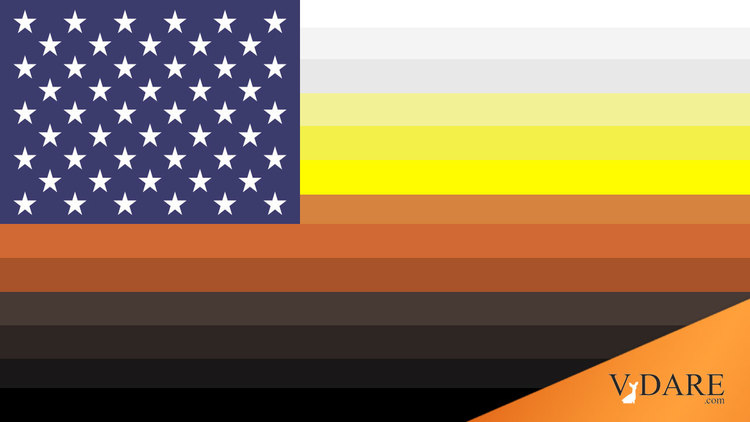 As the 2020 U.S Census data leaked out, showing that the much-derided Great Replacement of America’s whites is (of course) real, Ruling Class mouthpieces went into predictable defensive crouches. Thus immigration enthusiast Matthew Yglesias tweeted “The real American future is lots of white people with one grandparent from Asia or Latin America.” (He’s since deleted the tweet but VDARE.com lovingly saved a screenshot to illustrate Steve Sailer’s scathing commentary.) It’s an apparently unkillable idea that racial tensions will dissolve through inter-breeding:  veteran immigration enthusiast John J. Miller enthused “everyone will have a Korean grandmother” over 23 years ago [Face of the Nation, by Jonathan Tilove, South Florida Sun Sentinel, July 12, 1998]. But it’s obvious nonsense.

My recent piece on black-white BLM activist and “Critical Race Theorist” Ijeoma Oluo pointed out that that many black-white mixes will “black align” and, as with Barack Obama, marry black people and gradually dissolve into that race. A minority might marry whites and do the opposite. Broadly, however, we should not expect the rise of some “rainbow race,” but, instead, the rise of a kind of caste system. We should look to South America, or even India, if we want to understand the future our Ruling Class is inflicting on us.

As I discussed in 2018, Brazil has, in effect, a kind of racial caste system. At the top are the “whites.” They have remained separate because mixed-race unions are, in general, extremely rare.

Similarly, according to the Pew Research Center, in 2008 14% of marriages in the U.S. were “mixed race” [ Marrying Out: One-in-Seven New U.S. Marriages is Interracial or Interethnic, June 4, 2010]. But this is misleadingly high because “Hispanic” is counted as a “race” despite it being a White-Native American mixture. The average American Hispanic is 65% white and some actually are white [The Genetic Ancestry of African Americans, Latinos, and European Americans across the United States, by K. Byrc et al., American Journal of Human Genetics, 2015]. Hence, in 2015, 42% of “mixed-race marriages” were in fact White-Hispanic. Just 15% were White-Asian and 11% were White-Black. (Asian out-marriage has actually decreased since the 1980s, presumably because there are more Asians to choose from) [Trends and patterns in intermarriage, by G. Livingston & A. Brown, Pew Research Center, May 18, 2017].

This is all in line with research finding that, on average, people marry those who are genetically similar to themselves. Evolutionary theory would predict this: people in effect try to pass on more of their genes—which also makes mixed race marriages relatively rare [See Ethnic Nationalism: Evolutionary Psychology and Genetic Similarity Theory, by J. Philippe Rushton,. Nations and Nationalism, 2005]. And, when  do happen, they follow the rules of genetic similarity: whites are genetically the closest to Hispanics, then to Asians and then to Blacks [See On Genetic Interests, by Frank Salter, 2007].

Mixed-race unions were common out of necessity in many Spanish-speaking Latin American countries because European immigration was so heavily disproportionately male and because females will tend to sexually select for high status males—that is for the successful invaders [Exchanging fluids, by T. Cabeza de Baca et al., Politics and Life Sciences, 2020].

But this was not the case in Brazil—whole families emigrated from Portugal, making it much more comparable to the US. Thus the southern state of Santa Catarina is 85% white.

Beneath the Brazilian whites, there are the “Pardos.” These are a mixture of white and Native American, with some of them being up to 80% white. As Genetic Similarity Theory would predict, and as happens with Hispanics, they tend to marry each other, creating a “cline”: a distinct group between two races.

In much the same way, we would expect America’s increasing population of “Hapas”—usually the products of a white male and an Asian female [Trends and patterns in intermarriage, by G. Livingston & A. Brown, Pew Research Center, May 18, 2017] to marry each other, gradually creating a distinct cline.

This has happened before in America. “Mulattos” used to identify as such. They perceived themselves as clearly distinct from blacks, and married other Mulattos, always taking pride in their light skin [Our Kind of People, by Lawrence Otis Graham, 1999].

Most of South America is a “pigmentocracy” in which Amerindians are the bottom of society and people become gradually lighter skinned as you move towards the top [Pigmentocracies, by Edward Telles, 2014]. A meta-analysis of this racial caste system found that, in South American samples, Native American or Black ancestry was negatively associated with socioeconomic status while European ancestry was positively associated with it [Biogeographic Ancestry and Socioeconomic Outcomes in the Americas: A Meta-Analysis, by Emil Kirkegaard et al., biorxiv, 2016].

Thus, Rutilio Martinez and Vish Ayer of the University of Northern Colorado write:

Latin American societies are structured in a fuzzy racial caste system. Whites are at the top. Next are individuals of mixed European and Indian or mixed European and African ancestry, the Mestizos and the Mulattos, respectively. At the bottom are the Indians and the blacks. Integral to this system is an overt preference for European appearance and, among many whites, the firm conviction that the dark-skinned are racially inferior

The world’s best known caste system—that of India—involves a clear racial element. The Hindi word for caste is “Varna,” which means “color” [The Geopolitics of South Asia, by Graham Chapman, 2018]. Although there is all kinds of variation, the higher castes—especially the Brahmin, the priestly caste—stereotypically and anecdotally have lighter skin than the lower castes and especially the Untouchables, known as the “Dalit” [Transaction and Hierarchy: Elements for a Theory of Caste, by Harold Tambs-Lyche, 2017]. The four super-castes—the high caste Brahmin (priests and teachers), Kshatriyas (warriors), Vaishyas (merchants and farmers) and the low caste Shudras (servants and laborers)—generally intermarry among themselves. Indeed they are often endogamous within the thousands of sub-castes based on profession or ancestry within these super-castes. The outcastes, likewise, intermarry. A 2014 survey found that 95% of Indian marriages are between people of the same caste [Odisha increases inter-caste marriage incentive to Rs. 2.5 Lakh, by Preksha Malu, Sabrang, July 6, 2018].

As we would expect, there is evidence that, on average, the higher is your caste rank then the more genetically similar you are to Europeans; to the Indo-Europeans who invaded India around 5,000 years ago and established the caste system. Genetic distance to Europeans increases as you descend the caste hierarchy [Genetic Evidence on the Origins of Indian Caste Populations, by Michael Bamshad et al., Genome Research, 2001].

Bottom line: multiracial societies tend to develop caste systems in which genetically similar people intermarry and increasingly see themselves as separate and distinct. There is no reason to think America will be any different.

Why is our Ruling Class doing this to us?