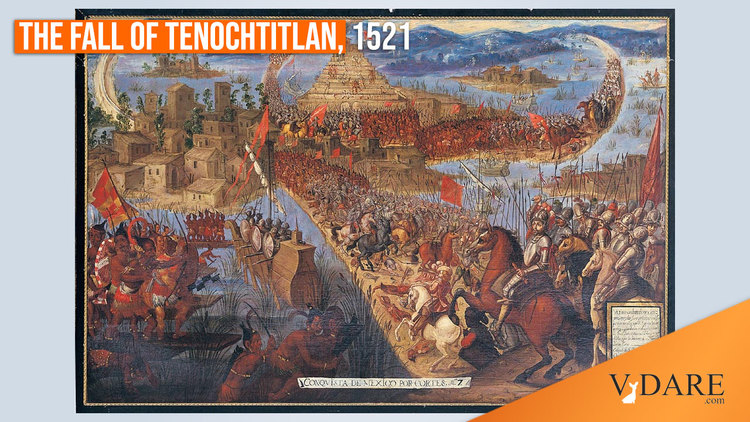 Tenochtitlan was the capital of the Aztec Empire, a magnificent city on a lake.  It's now called Mexico City, one of the world's biggest cities.

It was an epic struggle in which Hernan Cortes and the Spaniards, along with their many Indian allies, finally defeated the Aztec Empire under its last emperor, Cuauhtemoc.

For historical background, see my article from two years ago: Hernan Cortes, Father Of Mexico, Landed Exactly 500 Years Ago. Mexicans Are Ambivalent .

In the Zocalo, Mexico City's historic plaza, a replica of the Aztec Templo Mayor has been built, and President Andres Manuel Lopez Obrador (AMLO) is scheduled to hold a ceremony there to commemorate the 500th anniversary.  Click here to see pictures of it.

What sort of perspective will AMLO offer the audience on the Fall of Tenochtitlan?  I can’t say, I’m writing this before it occurs.

[HABRÁ ACTOS CONMEMORATIVOS POR LOS 500 AÑOS DE LA CAÍDA DE MÉXICO-TENOCHTITLÁN (“There Will be Commemorative Acts for the 500 Year Anniversary of the Fall of Mexico-Tenochtitlan”), by Armando Yefferson, 24 Horas, July 13, 2021]

As in the United States, name-changing is part of it. The Mexico City government announced the renaming of a bridge and Metro station named after Pedro de Alvarado, a lieutenant of Hernan Cortes (and pseudonym of a VDARE.COM "Hispanic dissident" writer).

Earlier, an article in May reported Mayor Sheinbaum as saying “The fall of México-Tenochtitlán started a tale of epidemics, abuses and 300 years of colonial rule in Mexico.”

Having lived in Mexico, I’m familiar with the common explanation that “The Spaniards conquered us.” Even white Mexicans say that.

I have also read that there are no statues of Hernan Cortes in Mexico, and I've repeated that.

But later, I discovered that’s not true. I found one. So there's at least one. (These days, I better not reveal where it is. It's a dangerous time for statues.)

For starters, the majority of Mexicans are mestizos, with both Indian and European ancestors. Therefore, the majority of today’s Mexicans would definitely not exist today had it not been for the Spanish conquest of Mexico and the resulting racial mixture.

The Spaniards and their Indian allies defeated the Aztecs and destroyed Tenochtitlan, and then Cortes had to prevent his Indian allies from annihilating the surviving Aztecs.

After the destruction began the re-construction. The Spaniards rebuilt the city in Spanish style, using the same stones from the buildings they’d destroyed.

As time went by the Spaniards and their Tlaxcaltecan allies conquered more territory which had not been part of the Aztec Empire, forming a colossal colony known as El Virreinato de Nueva España, The Viceroyalty of New Spain.

From Mexico City the Viceroy ruled the vast colony  in the name of the King of Spain (thousands of miles away across the Atlantic).  New Spain included all of what is now Mexico, the U.S. Southwest and Central America.

The three hundred years Mexico was a Spanish colony is the period in which the Mexican people and culture were formed. To deny this is to deny reality.

There’s a plaza in Mexico City called Tlatelolco. It’s the site of the Aztecs’ last stand, where they surrendered on August 13th, 2021.  It’s an impressive place, with both Aztec ruins and a colonial Catholic church.

There’s a monument there, with an inscription written by someone with a good grasp of history.

Rather than present the fall of Tenochtitlan as a melodrama, it puts the fall of the city in perspective, with these words:

Heroically defended by Cuauhtemoc,
Tlatelolco fell to the power of Hernan Cortes.
It was neither a triumph nor a defeat.
But the painful birth of the mestizo nation that is the Mexico of today.

Yes, by all means, Mexicans should commemorate the Fall of Tenochtitlan. But they should do so in a manner respectful of both their Indian and European forebears, who made them what they are today.