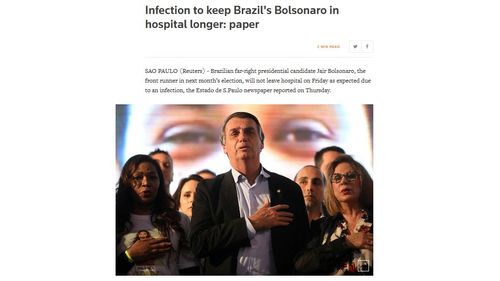 Journalists have a long history of inciting violence against their political opponents. In America, we've already seen this with the (already forgotten) ambush against Steve Scalise and other members of the Republican Congress. In Brazil, where crime is reaching endemic proportions, the media has been waging a campaign of hatred against frontrunner Jair Bolsonaro, invariably described as "far-right" though he's leading all the polls. It culminated in him being stabbed. Unfortunately, he has now caught an infection and will be stuck in the hospital for longer than initially thought.

Brazilian far-right presidential candidate Jair Bolsonaro, the front runner in next month’s election, will not leave hospital on Friday as expected due to an infection, the Estado de S.Paulo newspaper reported on Thursday.

Citing sources close to Bolsonaro, the paper said he caught a bacterial infection after a catheter was removed during his recovery from a near-fatal stabbing in the abdomen three weeks ago. 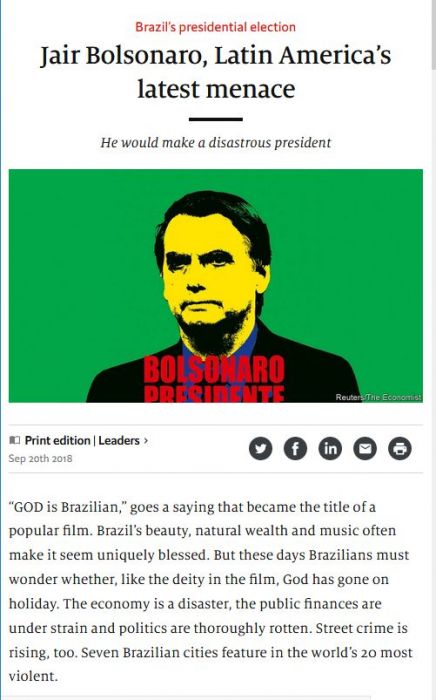 The Workers' Party candidate, Fernando Haddad, is expected to win a runoff, though it is no sure thing. However, astroturfed protests are being organized against Bolsonaro and the media continues to take a hard line against him. [Brazil elections: A tight and turbulent race, by Sam Cowie, Al Jazeera, September 27, 2018]

One note in passing: it's always striking how publications one thinks of as "conservative" or "pro-capitalist," such as The Economist, are far more opposed to right-wing populism than overtly communist or socialist parties taking power.

Mr Bolsonaro is the latest in a parade of populists—from Donald Trump in America, to Rodrigo Duterte in the Philippines and a left-right coalition featuring Matteo Salvini in Italy. In Latin America, Andrés Manuel López Obrador, a left-wing firebrand, will take office in Mexico in December. Mr Bolsonaro would be a particularly nasty addition to the club (see Briefing). Were he to win, it might put the very survival of democracy in Latin America’s largest country at risk.

One is tempted to wish that these people really do have their property confiscated by the hard Left.