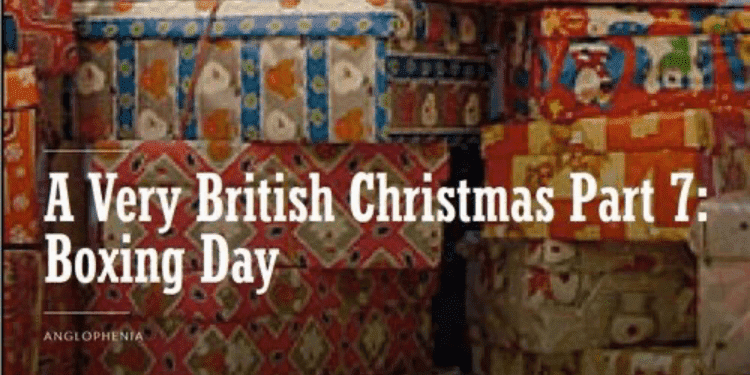 A Reader Writes On Boxing Day in Massachusetts

From: A Massachusetts Reader [Email him]

Gov. Weld declared Boxing Day an official named holiday in Massachusetts in the 90s in honor of the Bay state's English heritage. [Massachusetts Celebrates Boxing Day, Lewiston Sun-Journal, AP, December 24, 1996 ] We don't get the day off however!

James Fulford writes: Most Americans, according to Mark Steyn (who has experienced December 26 in Canada, England, and New Hampshire) don't even want the day off. That's one reason why America is richer than its Anglospheric brothers and sisters.

"Are you working over Christmas?" I asked the waitress at my local diner in New Hampshire last Thursday – December 23rd.

My mistake. I'd just been on the phone to an editor in London who'd wanted early copy for the late January issue because no-one was going to be in the office "over Christmas". I'd forgotten that, in New Hampshire, "over Christmas" means December 25th. In London and much of the rest of Europe, it's a term of art stretching as far into mid-January as you can get away with....

The French and Germans, who average 40 days holiday a year, assume the reason Americans don't take holidays is because they don't get them. In fact, it's very hard persuading them to take the ones they do get. In rural states, most Federal holidays – Presidents Day, Martin Luther King Day, etc – go unobserved except by banks and government agencies. It's all I can do to persuade my assistant not to come in on Christmas Day – "just for a couple of hours in the morning in case there's anything urgent," she says pleadingly.

"There won't be anything urgent," I scoff. "Those deadbeats at The Irish Times [where this piece was first published] won't be back in the office till the week before Valentine's Day." My excavator, who's digging a new foundation for my barn, woke me bright and early on Thanksgiving morning to put in five hours work – "Thought I oughtta build up an appetite for all that turkey."

"Merging takes time—except in America. Here the process has been uniquely rapid. Thus about 7 million Germans have immigrated to the United States since the beginning of the nineteenth century. Their influence has been profound. To my British eye it accounts for the odd American habit of getting up in the morning and starting work. "

But Brimelow has certainly assimilated—he was working yesterday—including writing that blog post!