Are Disgruntled Minority Massacres The Price Of Affirmative Action?

VDARE.com has been chronicling the phenomenon of Disgruntled Minority Massacre, which has racked up a bloody toll around the country. Non-white employees turn against their white co-workers in sudden violence. And all too often, as in the Omar Thornton  case  in Connecticut, the Main Stream Media that controls our public discourse hints the victims may have deserved it because of “privilege” or “racism.”

My theory developed in the course of many years’ experience in the media business: as the horrifying on-air killings of Alison Parker and Adam Ward by black anchor Vester Flanagan suggests, these murders aren’t just motivated by anti-white racism, but by non-whites’ fear of their own professional incompetence being revealed.  This raises the terrifying possibility the violence is simply another inevitable cost of diversity.

According to Richard Lynn, blacks as a group express a systematically higher rate of psychopathy, a personality disorder of which the central feature is the lack of a moral sense. Lynn writes:

There is almost complete consistency in the racial differences in outcomes that can be considered measures of psychopathic personality. In everything from child behavior to sexual precocity to adult crime rates we find Asians at one extreme, blacks at the other, and whites, Hispanics and American Indians in between. These differences are not only consistent through time but are found in countries such as France, Britain, Canada, and the United States, which have very different histories of what could be called “racism.” Indices of high psychopathic personality in blacks are likewise found in the virtually all-black societies of Africa and the Caribbean.

This is then combined with the problem of “mismatch,” of blacks being put in jobs they can’t do. The resulting constant frustration only exacerbates the visceral anti-white fury created by the anti-white rhetoric from the MSM.

Consider Flanagan’s situation, placed by Affirmative Action into a position in which he could not succeed. Flanagan had no fewer than six jobs in the news business between 1995 and 2013. He had terrible performance reviews, which documented verbal abuse and threats as well as incompetence. Thus the general manager at WDBJ simply muttered he “passed muster”—a nice way of saying he was hired for being black. [Gunman Vester Flanagan’s personnel files reveal disturbing WDBJ tenure, by Michael Martinez, CNN, August 28, 2015]

His on air performance was called “stiff and nervous,” he took interviews and press releases at face value, and he even wore a pro-Obama button while interviewing voters [Exclusive: He was the ‘human tape recorder,’ by Ben Ashford, Daily Mail, August 26, 2015]. According to his employers, Flanagan was incapable of turning ideas into finished stories and even when he did, they were lean on facts and video.

And Flanagan was typical of blacks in the media. I’ve worked with them, hired them, and fired them. At best, they’ve been mediocre. Flanagan is no outlier.

Twenty-five years ago, I worked with a black fellow at a major daily. I liked him, but I finally had to admit he wasn’t the sharpest knife in the drawer. I didn’t want to think it, being then in denial about black intellectual capacity. But there it was. He knew Journalism 101, and that was it. He was competent.

Of the three out of four blacks I’ve hired, only one performed well. Like my colleague from years ago, they had a cocktail-party personalities. They were genuinely nice men, almost to the point of being sweet, and got along well with colleagues. They joshed with the whites, and didn’t mind being the target of jokes. They were part of the gang, no easy task in a newsroom where one is the only black. All three submitted solid resumes, and tested and interviewed well. But two were barely competent, one was incompetent. All three were liabilities. No one cried when they left.

Let’s call the first Joe. Shortly after hiring, Joe began filing poor stories. The reporting was thin, most likely because he didn’t know how to cover a beat. He wasn’t a bad guy, just an inept reporter and writer. He didn’t last long, and went to work for a smaller outfit, having done, to be generous, a mediocre job. He never broke a major story. His writing was marginally superior to that of a college sophomore.

Black reporter No. 2, we’ll call Jim. He stayed with us about the right amount of time for a young man his age, but about a year into his tenure, he began churning out the same stories about the same subjects day after day. He barely pulled together his daily story list. His effort largely consisted of adding a few new details to an old story. He wrote a new top, rehashed background from previous stories, then added a few new quotes. His writing was better than Joe’s, but nothing inspired. He too had trouble covering a beat and, like Joe, never broke a major story.

This fellow landed in a much bigger newsroom earning more money. And that wasn’t because of the stellar journalism he produced. As much as I liked him, I was glad to see him go.

A third black reporter, John, was flatly incompetent. He seemed enthusiastic, wrote a passable test story and talked a good game in the interview. We learned he had conned us soon after he arrived. He was clueless about the basics of reporting. He didn’t know what questions to ask or how to conduct an interview. He called sources “dude” and misspelled their names. He missed deadlines and filed incomplete, incoherent stories. He didn’t bother copy-editing. He editorialized and ignored newsroom policies. He removed his editor’s changes to stories and reinserted original copy. During meetings, he repeatedly argued with his editor.

In fairness to these reporters, our part of America is a conservative whitopia. They were fish out of water, although at least one of them was quite popular. None of them demonstrated Flanagan’s anti-white hatred. But they were sluggish and indolent.

Two more examples. Through the years, a black editor repeatedly applied for a job. He had risen to a position at a big-city daily, only to tumble back down the ladder. Such was his fall he was looking for work at our level. The reason? As a top news pro who knew him told one of my colleagues, he was incompetent. If true, how did he land at a big-city daily? We know how.

We never hired him.

And this is the response I received from a black applicant after I politely explained that her test result obviated an interview: “Well, I’ll have to apply to a newspaper where my writing is strong enough!” She had zero interest in finding out where she had failed, or what she could have done better.

But that’s what happens when college instructors lavish praise on poor work. Confronted with the truth, their former students fume and rage.

My experience is hardly unique. Recall that blacks perpetrated 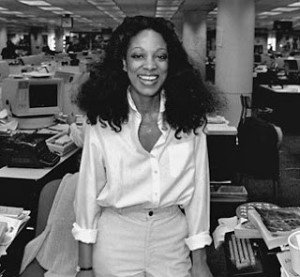 two of the most ignominious frauds in the profession’s history:

The story was dubious on its face, but white editors Ben Bradlee and Bob Woodward refused to ask the hard questions. It’s impossible to avoid the conclusion Cooke’s skin color shielded her from scrutiny, and the editors were anxious for their black reporter to receive a Pulitzer.

Funny thing is, it was a black woman editor, Vivian Aplin-Brownlee who doubted the story from the start. She was vacationing when the story landed on page 1.

"She looked at the story on Page 1, turned to me and said, 'I don't believe a word of this,' " said her husband of 32 years, Dennis Brownlee. She tried several times to alert higher-level editors that the story didn't sound right and that Cooke was not capable of doing the reporting she said she had done. But the other editors dismissed her concerns, and Bob Woodward, the Metro section's assistant managing editor at the time, promoted Cooke to the city staff. 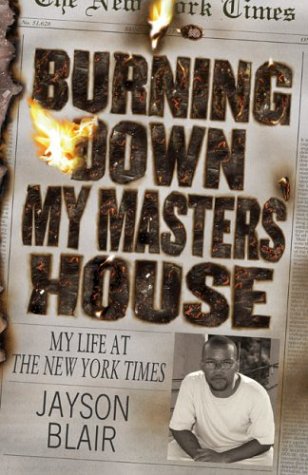 Editor Howell Raines admitted the truth: He promoted Blair—and overlooked his dismal record—because Blair is black. Raines even kept Blair on the payroll after an NYT editor wrote in a memorandum “We have to stop Jayson from writing for the Times. Right now.”

“I believe in aggressively providing hiring and career opportunities for minorities. Does that mean I personally favored Jayson? Not consciously. But you have a right to ask if I, as a white man from Alabama, with those convictions, gave him one chance too many by not stopping his appointment to the sniper team. When I look into my heart for the truth of that, the answer is yes.”

That stupidity cost the jobs of Raines and of his colleague Gerald Boyd (who was black). But they took their cue from publisher Arthur Sulzburger, who said diversity was “the single most important issue” facing the paper. [ The Great Black Hope: The Jayson Blair Case and the New York Times,By Nicholas Stix, TooGoodReports, June 3, 2003] No wonder Blair got away with journalistic murder.

What makes these stories even worse is that outlets like the Washington Post or the New York Times get the most competent blacks. The local outlets are stuck with people like my former coworkers or Flanagan.

And yet, no matter how it damages the institutions involved, the commitment to “diversity” goes on.

Affirmative Action and diversity policy likely put Flanagan in Roanoke, where he was finally fired for incompetence and hostility. The former likely drove the latter, ending in rage, murder and suicide.

And it will happen again, soon.

Robert deBrus (email him) is a newspaper editor somewhere in America.