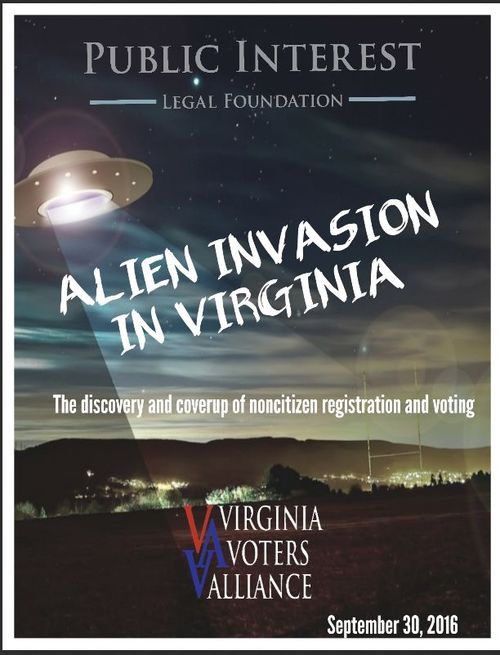 Hey, Republicans! Did you enjoy Election Night last week? Get ready for a lot more nights like that as immigration turns every last corner of the country blue.

When Ed Gillespie lost in Virginia, liberals crowed about how they're winning the war of ideas. The country has thoroughly, emphatically rejected Trumpism!

Republicans, being idiots, played along, arguing only about whether Gillespie's problem was that he didn't embrace Trump enough or embraced him too much.

Gillespie's campaign was fine. No cleverer arguments, community outreach or perfectly timed mailings would have changed the result. Contrary to The New York Times' celebratory article in last Sunday's magazine, "How the 'Resistance' Helped Democrats Dominate Virginia," it wasn't Democratic operative Kathryn Sorenson's savvy use of Facebook, Google and Eventbrites that carried the day. "The Resistance" didn't win.

The foreign-born vote overwhelmingly, by about 80 percent, for Democrats. They always have and they always will—especially now that our immigration policies aggressively discriminate in favor of the poorest, least-educated, most unskilled people on Earth. They arrive in need of a LOT of government services.

It's one thing not to mention ethnic differences in crime statistics or welfare usage to avoid hurting anyone's feelings, but if the GOP continues to pretend to see no difference in how different groups vote—while importing millions more foreigners to vote against them—then they should get used to a lot more elections like what happened in Virginia last week.

It's not as if Republicans are unaware of how demographics can affect elections. They certainly notice when they're drawing congressional boundaries. We don't see GOP congressmen saying, No, I don't mind trading that all-white town for part of a Chicago housing project. Why should I?

Currently, everyone seems to be blaming the total disappearance of the GOP in Virginia on another demographic trend: All those federal workers living in the northern part of the state.

In the past 40 years, upward of 50 million culturally backward, dirt-poor immigrants arrived in America, and state after state has gone blue, but we're always told states are flipping to the Democrats for some reason—any reason!—other than immigration.

True, Virginia is home to 322,198 people who are either current or retired federal employees. On the other hand, there are more than 800,000 Virginians who are foreign-born—and that's not including the children, grandchildren and great-grandchildren of the foreign-born who arrived in the 1970s, 1980s and 1990s.

Moreover, in Virginia, "federal employee" is not as Democratic-leaning as it sounds on account of the state's numerous military bases. Virginia Beach, for example, the largest city in the state, has a higher percentage of federal employees in the workforce than the entire Washington, D.C., metro area. And yet, Virginia Beach still votes Republican in presidential elections and is represented by a Republican in Congress.

Almost 15 percent of Virginians speak a language other than English at home. If we double the number of Virginians who are now employed by, or have ever worked for, the federal government—and assume that none of them work on military bases—that's still just 8 percent of the population.

The only reason Democrats want a never-ending stream of Third World immigrants is because they know immigrants will help them win elections, allowing The New York Times to write self-congratulatory editorials like this one last week: "Virginia Rejects Your Hateful Politics, Mr. Trump."

They were brought in to vote for the Democrats. That's the real job immigrants are doing that Americans just won't do.

As Democratic consultant Patrick Reddy wrote for the Roper Center 20 years ago, the 1965 Immigration Act, bringing in "a wave of immigration from the Third World," will go down in history as "the Kennedy family's greatest gift to the Democratic Party."

There isn't much time on the clock before it's lights-out for the GOP. And all Republicans can think to do is argue about how quickly to grant amnesty to so-called "Dreamers" and give the Democrats another 30 million voters.

Post
Joe Biden Repeated Third Grade: It Seems to Have Worked Out Well for Him

Post
NATURE Magazine: Coronavirus Crisis Will Cause Science to Concentrate on the Competent Rather Than the Diverse, and That's BAD.