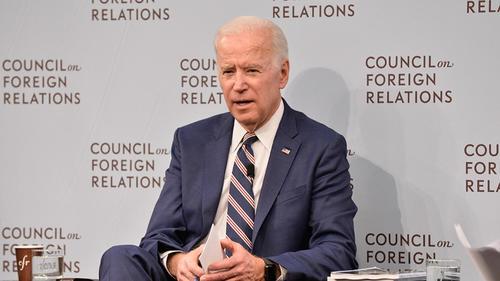 Now that Creepy Joe Biden thinks he has put to rest all the cringy questions about his grabby hands, he has reverted to one of his old-time shticks: middle-class Joe. Champion of the masses. Hero of the hoi polloi. A six-term U.S. senator and two-term vice president, which equates to 44 back-slapping, log-rolling, favor-trading years in Washington, this decrepit Beltway swamp-dweller wants flyover Americans to believe that he's really just like you and me.

To which I can only reply with one hearty syllable: HA!

Reality-based reporting and informed commentary since the rollout of Biden 2020 has rightly focused on the Biden family's ideological and interest-conflicted dalliances with Ukraine and China. But let's first start with a reminder about elite Biden privilege closer to home.

Robert Hunter Biden, youngest son of the veep creep, secured a prestigious direct commission to the U.S. Naval Reserves in 2012 as a public affairs officer. The program recruits civilians without prior military service who have "special skills that are critical to sustaining military operations." Biden the younger's primary qualification for the cushy part-time job was his last name. The power of nepotism came in handy when Bidenspawn was forced to seek not one, but two waivers, to nail down the gig.

Ordinary applicants have to meet age restrictions (under 40 at the time he sought the position, now 42). He was 43. Then hapless Hunter needed a second waiver to get a pass for prior cocaine use. Granted! Only six public affairs officers received such direct appointments from the Navy Reserves that year. Amazing, isn't it, that there wasn't a single other applicant in America (population: 327 million) with a clean drug history and proper age eligibility to take the slot.

But for all that string-pulling effort, Hunter Biden barely served a year. After testing positive for—wait for it—cocaine during a random drug test, he was discharged quietly in February 2014. The hush-hush deal, undisclosed until a whistleblower told The Wall Street Journal eight months later, was yet another perk of Biden patronage. So was his immunity from any investigation or review of his law license by the Connecticut bar. And so, too, was his quick career bounce back.

A month after his humiliating discharge from our military, Biden's coke-abusing party boy was appointed to the board of directors of Ukraine's largest private gas producer, Burisma Holdings, owned by a powerful Russian government sympathizer, who had fled to Russia that year. It's also the same company a top Ukrainian prosecutor was investigating for corruption before he was fired—at the behest of Papa Biden, according to Joe himself, who bragged about threatening to withhold $1 billion in loan guarantees to Ukraine during a Council of Foreign Relations speech in 2018.

After reporting earlier this month that Ukrainian officials are still probing the shady company and its dealings with Baby Biden, The Hill's John Solomon proposed pointed questions for the Democratic presidential front-runner: "Was it appropriate for your son and his firm to cash in on Ukraine while you served as point man for Ukraine policy? What work was performed for the money Hunter Biden's firm received? Did you know about the Burisma probe... (and) should you have recused yourself?"

Similar queries apply to Hunter Biden's other position at investment firm Rosemont Seneca, which snagged a $1 billion deal in 2013 with the Commie-run Bank of China, first reported by investigative author Peter Schweizer, just days after Daddy B had met with China's president Xi Jinping.

As I catalogued in "Culture of Corruption" more than a decade ago, name-trading and favor-extracting are the story of Hunter the Privileged and Joe the Enabler's lives:

I challenge middle-class Joe and his moocher son to find a rank-and-file union member's child who has enjoyed such spectacular career success and largesse.

The Beltway Bidens: Not just creepy but also crooked. And most definitely still not like us.