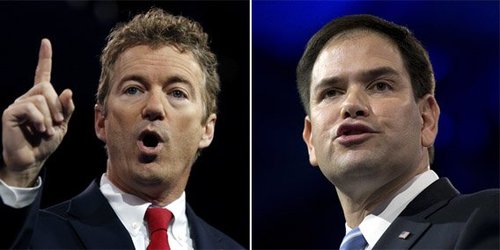 Rand Paul had his best debate moment Tuesday when he challenged Marco Rubio on his plans to increase defense spending by $1 trillion.

"You cannot be a conservative if you're going to keep promoting new programs you're not going to pay for," said Paul.

Marco's retort triggered the loudest cheers of the night:

"There are radical jihadists in the Middle East beheading people and crucifying Christians. The Chinese are taking over the South China Sea. ... the world is a safer and better place when America is the strongest military power in the world."

Having called for the U.S. Navy to confront Beijing in the South China Sea, and for establishing a no-fly zone over Syria that Russian pilots would enter at their peril, Rubio seems prepared for a confrontation with either or both of our great rival nuclear powers.

Dismissing Vladimir Putin as a "gangster," Marco emerged as the toast of the neocons. Yet the leading GOP candidate seems closer to Rand.

Donald Trump would talk to Putin, welcomes Russian planes bombing ISIS in Syria, thinks our European allies should lead on Ukraine, and wants South Korea to do more to defend itself.

Uber-hawk Lindsey Graham did not even make the undercard debate. And though he and John McCain are the most bellicose voices in the party, they appear to be chiefs with no Indians.

Still, it is well that Republicans air their disagreements. For war and peace are what the presidency is about.

Historically, Republican presidents appear to line up on the side of Rand and Trump.

Since WWII, there have been five elected GOP presidents: Eisenhower, Nixon, Reagan, Bush I and Bush II. Only Bush II could be called a compulsive interventionist.

Ike ended Truman's war in Korea and kept us out of Indochina after the French defeat at Dien Bien Phu. He ordered the Brits, French and Israelis out of Suez after they had attacked Egypt in 1956. He gave us seven years of peace and prosperity.

Nixon pledged to end the U.S. war in Vietnam, and did. And as Ike invited the Butcher of Budapest, Khrushchev, to visit the United States, Nixon invited Brezhnev, who had crushed the Prague Spring.

Nixon became the first Cold War president to visit the USSR, and famously ended decades of hostility between the United States and the China of Chairman Mao.

Reagan used military force only three times. He liberated the tiny Caribbean island of Grenada from Marxist thugs who had murdered the prime minister and threatened U.S. medical students.

He put Marines in Lebanon, a decision that, after the massacre at the Beirut barracks, Reagan regretted the rest of his life. He bombed Libya in retaliation for Moammar Gadhafi's bombing of a Berlin discotheque full of U.S. troops.

Blowback for Reagan came with Pan Am 103 over Lockerbie in 1988.

Though they were the foremost anti-Communists of their era, Nixon and Reagan negotiated historic arms agreements with Moscow.

Reagan did send arms to aid anti-Communist rebels in Angola, Afghanistan and Nicaragua, but never confronted Moscow in Eastern Europe, even when Solidarity was crushed in Poland.

George H.W. Bush sent an army of 500,000 to expel Saddam Hussein from Kuwait, but ordered those U.S. troops not to enter Iraq itself.

When the Berlin Wall fell and the Soviet Empire collapsed and the USSR disintegrated, Bush I played the statesman, refusing to exult publicly in America's epochal Cold War triumph.

It was George W. Bush who gave the neocons their hour of power.

After 9/11, came the invasion and remaking of Afghanistan in our image, the "axis of evil" address, the march to Baghdad, the expansion of NATO to Russia's doorstep, and the global crusade for democracy "to end tyranny in our world."

Result: The Republicans lost both houses of Congress in 2006 and the White House in 2008 when John ("We are all Georgians Now!") McCain was routed by a liberal Democrat who had opposed the war in Iraq.

With the exception of Rand and Trump, the GOP candidates appear to believe the road to the White House lies in resurrecting the attitude and policies of Bush II that cost them the White House.

From Marco and other voices on stage one hears: Tear up the Iran deal. Confront Putin. Establish a no-fly zone over Syria. Assad must go. Send offensive weapons to Kiev. More boots on the ground in Iraq and Syria. Send U.S. troops to the Baltic and warships to the Black Sea. Confront China in the Spratlys and South China Sea.

Responding to that audience in Milwaukee, most GOP candidates appear to have concluded that bellicosity and bravado are a winning hand in the post-Obama era.

Yet, those nationalist strongmen Vladimir Putin and Xi Jinping do not seem to me to be autocrats who are likely to back down when told to do so by Marco Rubio, Jeb Bush or Carly Fiorina.