Ann Coulter: How The Establishment Will Try To Destroy Trump

Shortly before Thanksgiving, New York Times columnist Frank Bruni [Tweet him]  wrote a column that should chill you to the bone.

Titled "Donald Trump's Demand for Love," Bruni said: "I had just shaken the president-elect's normal-size hand and he was moving on to the next person when he wheeled around, took a half step back, touched my arm and looked me in the eye anew. 'I'm going to get you to write some good stuff about me,' Donald Trump said.”

Bruni is a fabulous writer, but if he ever writes good stuff about you, Mr. President-elect, YOU WILL HAVE FAILED.

I assume this was just our president-elect doing something he gets the least credit for, which is being nice. But you can never be too careful.

The Times is in total opposition to Trump's stated goal to make America great again. Trump has got to know—not next year, but by 5 p.m. today—that anyone pursuing his agenda will incite rage, insanity and spitting blood from that newspaper.

There's a long and tragic history of Republicans who won the war but lost the peace by trading results for respectability.

He was a good prognosticator! Congress did exactly as he'd anticipated. But instead of saying "no," Bush caved.

That betrayal cost the GOP its most popular issue. As the Times' Michael Wines put it (shortly before Bush predictably lost his re-election bid), with the president's sellout, Republicans gave up "a political weapon so fearsome that it had destroyed three Democratic presidential candidates in 12 years.”

The Times had spent months hectoring Bush about the "yawning deficit," denouncing his "obdurate refusal" to raise taxes, and promising "political popularity" for the "needed" tax hike. But the moment Bush raised taxes, the Times couldn't stop crowing about his broken promise.

That was always the whole point. Not the "yawning deficit." Not raising revenue. But to get the GOP to give up its most potent issue.

Trump has just annihilated 16 far more experienced Republican rivals, the Clinton machine and the entire media/Hollywood/Wall Street complex by raising the one issue no other politician would touch: putting America's interests first on immigration.

What promise do you think they want Trump to break?

Luckily for the country, Trump doesn't seem obsessed with what the elites think of him. But his advisers include just the type of Republicans whose second-tier law schools make them particularly susceptible to the cheap respectability of establishment media approval.

Trump has been a politician for only a little more than one year. He has no experience with the tricks that will be played to get him to betray voters on his signature issue. The first president Bush knew what was coming—and he still broke his promise.

Manifestly, if anyone in Washington seriously wanted to build a wall, deport illegals, return criminal aliens to their own countries, end the anchor baby scam and prevent jihadists from immigrating here to kill Americans, it would have been done already.

Nearly every promise Trump made on immigration is 100 percent within the power of the president. For example:

It is already the president's job, as commander in chief, to protect the borders.

It is already the Department of Defense's job to build border walls.

It's already the law that citizenship is not acquired by being born on U.S. soil to an illegal alien. (No Congress has ever passed such a law, nor has the Supreme Court ruled that they are.)

It is already the secretary of state's duty to rescind visas from countries that refuse to take their criminals back.

It is already the president's job to prohibit the entry of any class of immigrants he deems "detrimental to the interests of the United States.”

It is already the president's job to remove immigrants who commit crimes, entered our country through fraud (i.e., every single refugee), are in the country illegally or who become public charges.

None of those things have ever been done before for one reason: The entire Washington establishment is unalterably opposed to enforcing our immigration laws.

Trump will have no trouble enacting the rest of his agenda. If congressional Republicans are good for anything, it is to repeal Obamacare, cut taxes and regulation, confirm good judges and protect the Second Amendment. No one but Trump would have done it, but not even Nancy Pelosi is going to attack Trump for keeping jobs in America.

Only when it comes to immigration will Trump be Gary Cooper, out there alone against every powerful entity in America. Just as he was during the campaign.

On immigration, Trump will be furiously opposed by: Democrats, Republicans, the permanent bureaucracy, the Chamber of Commerce, George Soros, The Wall Street Journal—in fact, the entire media, except four webpages, six bloggers and five talk-radio hosts—and hundreds of taxpayer-funded immigrant grievance groups. And that's just off the top of my head.

He'll even be opposed by his own hand-picked U.N. ambassador! (It is an amazing fact that at the 2016 State of the Union, both the Democratic president's address, and the Republican governor's response, attacked candidate Trump's immigration proposals.)

There's a reason millions of Americans were showing up at Trump's rallies chanting, "Build the Wall!" and not, "End Obamacare!" "Cut taxes!" "Save the Second Amendment!"—or any other slogan that could have been chanted just as easily at a Jeb! Rally.

There are only a handful of people in the entire country with the knowledge and ability to enforce our immigration laws. Any Cabinet appointees likely to impress The New York Times aren't going to get it done. They won't have to expressly defy Trump. They just won't do it. 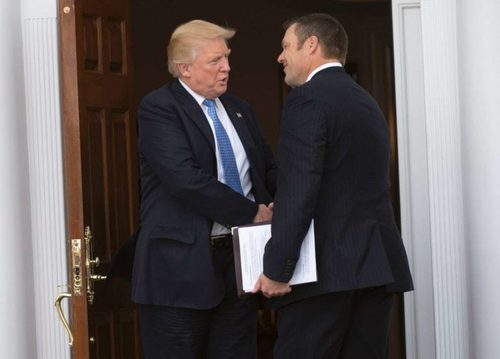 Perhaps they'll make some showy effort at deporting illegals—and then back down at the first La Raza lawsuit. Or they will allow career government lawyers to submit briefs in court that cite all the wrong cases. Or they'll wait for Speaker Paul Ryan's approval to do anything. Or they'll be moved by a Nikki Haley speech about the vibrant diversity of Somali refugees. Or they'll be scared off by Washington bureaucrats who say, You can't do that!

But if Trump chooses from among the few people who know how to get it done (Kris Kobach, Kris Kobach or Kris Kobach), his promises will be kept. He can relax. He can spend all his time playing golf, living in Trump Tower, yelling at American CEOs trying to outsource jobs—and engaging in appalling conflicts of interest with his businesses.

He could even shoot someone on Fifth Avenue. (I propose GOP consultant Rick Wilson!)

Trump is down to his last wish from Aladdin. He can impress The New York Times, or he can make America great again. But he can't do both.