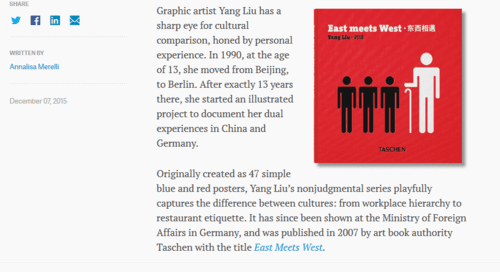 Yang Liu's EAST MEETS WEST—Charming, Accurate...And Would Be Racist If A Westerner Did It

Graphic artist Yang Liu has a sharp eye for cultural comparison, honed by personal experience. In 1990, at the age of 13, she moved from Beijing, to Berlin. After exactly 13 years there, she started an illustrated project to document her dual experiences in China and Germany.

Originally created as 47 simple blue and red posters, Yang Liu’s nonjudgmental series playfully captures the difference between cultures: from workplace hierarchy to restaurant etiquette. It has since been shown at the Ministry of Foreign Affairs in Germany, and was published in 2007 by art book authority Taschen with the title East Meets West.

The cultural differences between East and West, according to one artist, December 7, 2015

While Merelli characterizes these as nonjudgmental, they make exactly the kind of statements that are racist if Westerners make them. For example, this one says that Chinese are noisy in restaurants: 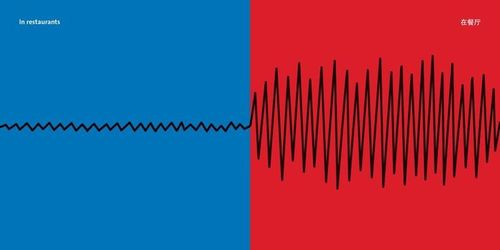 This one says that either Chinese are excessively deferential to their bosses—or their bosses are overbearing: 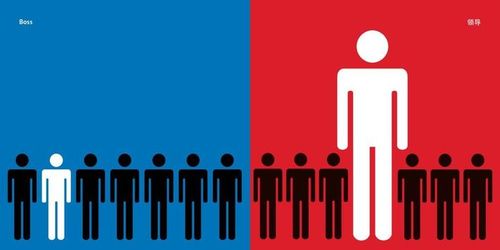 Of course, from the Chinese point of view, Western restaurants seem to be characterized by an eerie silence, and Westerners are disrespectful to their bosses—and remember that this woman lives in Germany, so that Chinese are being portrayed as both more noisy, and more deferential/authoritarian than Germans.

It's difficult to put a neutral, nonjudgmental spin on this one, which flat-out says that the Chinese custom is to lie, when Westerners tell the truth: 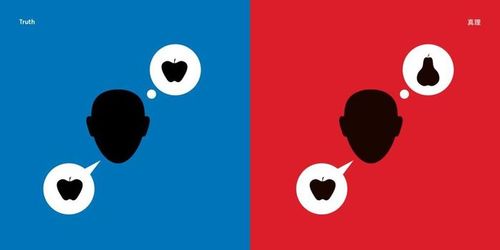 Now, all these things are fairly true, which doesn't mean Asians are horrible people, just different people. But it's the kind of thing that Westerners aren't allowed to say.