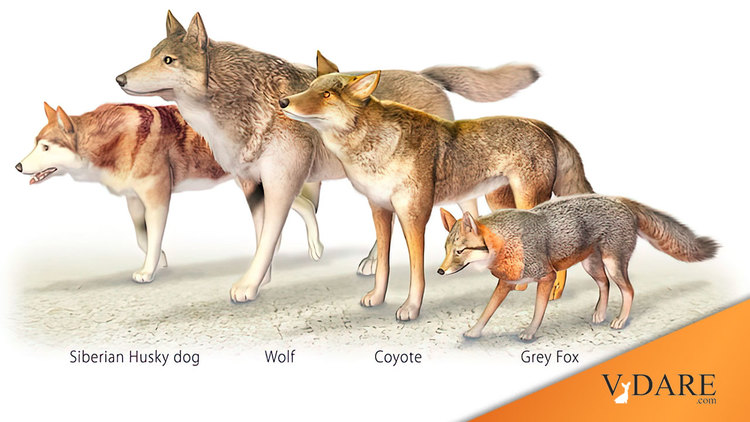 We hear all the time that because human races are not absolutely cut-and-dried distinct, therefore they don’t exist scientifically. Yet, scientists constantly try to work out the less than pure distinctions between dogs, wolves, and coyotes, even though most (but not all) scientists and almost all members of the public consider them distinct species despite their ability to interbreed.

Abstract
The grey wolf (Canis lupus) was the first species to give rise to a domestic population, and they remained widespread throughout the last Ice Age when many other large mammal species went extinct. Little is known, however, about the history and possible extinction of past wolf populations or when and where the wolf progenitors of the present-day dog lineage (Canis familiaris) lived1,2,3,4,5,6,7,8. Here we analysed 72 ancient wolf genomes spanning the last 100,000 years from Europe, Siberia and North America. We found that wolf populations were highly connected throughout the Late Pleistocene, with levels of differentiation an order of magnitude lower than they are today. This population connectivity allowed us to detect natural selection across the time series, including rapid fixation of mutations in the gene IFT88 40,000–30,000 years ago. We show that dogs are overall more closely related to ancient wolves from eastern Eurasia than to those from western Eurasia, suggesting a domestication process in the east. However, we also found that dogs in the Near East and Africa derive up to half of their ancestry from a distinct population related to modern southwest Eurasian wolves, reflecting either an independent domestication process or admixture from local wolves. None of the analysed ancient wolf genomes is a direct match for either of these dog ancestries, meaning that the exact progenitor populations remain to be located.

The U.S. government has long been exercised over the question of whether the “red wolf,” a mixture of wolf and coyote, is a species under the Endangered Species Act. Are they an inbreeding population like, say, humans or are they a constantly being regenerated set of hybrids like mules?

Eventually, the EPA decided that at least some of America’s red wolves are the product of mating among red wolves rather than of mating between coyotes and wolves and therefore they were a species legally requiring protection under the Endangered Species Act.

Perhaps. But on the other hand, this new ancient DNA study found wolf and coyote hybridization has been going on for at least 100,000 years:

The ancient American wolves in the study were from Alaska and the Yukon, outside the known range of coyotes in the Ice Age. This implies, either: 1) coyotes actually lived up here back then, or 2) mixing took place further south, and then spread northwards among wolves. (2/3)