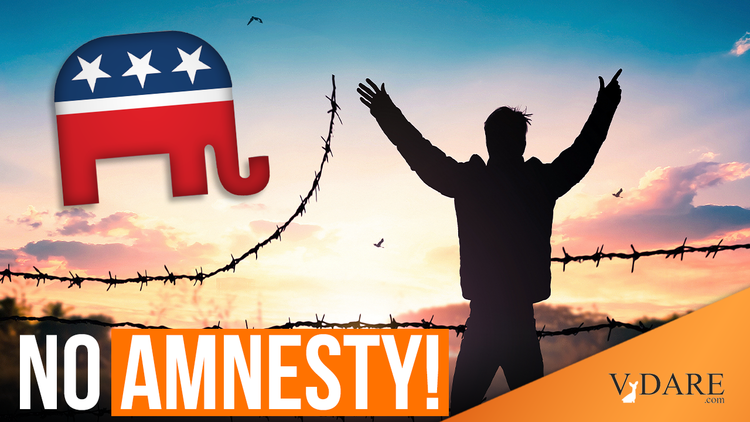 Will the GOP Be Tempted by Amnesty Again?

Immigration reformers are slapping down suggestions by the Republican establishment on finding “common ground” with Democrats over immigration, a veiled suggestion of amnesty for illegal aliens. [GOP Establishment Rebuked for Fleeing ‘America First’ with Amnesty Talk by John Binder, Breitbart, November 6, 2020]

While President Trump continues his election challenge to Democrat Joe Biden in numerous swing states, Sen. Lindsey Graham (R-SC) is discussing what a Republican-held Senate may do if they keep the United States Senate.  One of those measures noted by Graham, Roll Call reported, is a “common ground” immigration reform, the term often used by establishment Republicans and Democrats to disguise amnesty for 11 to 22 million illegal aliens.

Totally bad idea which ought to be fought tooth and nail.

America First conservatives and immigration reformers said Graham’s suggestion of an amnesty after millions of working and middle class Americans showed up to vote for Trump’s economic nationalist agenda—which includes a reduction to overall immigration—is a slap in the face to the party’s new coalition of constituents.

“Graham pledging to work with Democrats on immigration? We know exactly what that means. A mass amnesty bill,” RJ Hauman from the Federation for American Immigration Reform (FAIR) told Breitbart News.

“No matter what ends up happening, Trump has forever changed the Republican Party—it is now the party of protecting American workers and secure borders, not amnesty and cheap foreign labor,” Hauman said:

His base stuck with him through thick and thin, so if the GOP doesn’t accept the arrival of a durable political phenomenon and adjust its immigration policymaking accordingly, the same won’t be able to be said about them. Why do some lawmakers have a hard time processing this?

Gosar gets the demographic question.

Rep. Paul Gosar (R-AZ) told Breitbart News that “any amnesty ensures Texas and Arizona and Florida will be solid blue and would join southern California as a once red area.”

Rep. Jim Banks (R-IN) said, “There is no common ground between conservative Republicans” and Biden on immigration. Biden’s plan includes amnesty for all illegal aliens, freeing border-crossers into the interior of the U.S., providing free healthcare to illegal aliens, and increasing the flow of foreign visa workers into the U.S. labor market to compete for jobs against Americans.

Banks said the Republican Party must remain the representatives of the working and middle class who have suffered from globalist free trade, mass immigration, and whose family members are often put at risk with deployments to foreign wars.

The article includes an exchange between David French and Representative Banks.

"If anyone doubts whether this election is a stinging, crushing defeat for Trumpism, just look at the meltdown happening on Fox, on talk radio, and on this website. They perceive the devastating damage done to their cause."

Banks responds with this great answer:

"I 100% disagree. 1st, this election isn’t over. 2nd, @realDonaldTrump's already left an indelible mark on our party—we're more unified than we ever were before. He’s taught us how to fight the radical Left and how to be the party of the working class. There’s no going back—ever.

We need more representatives in Congress like these two.

Lou Murray, a former adviser to Trump’s 2016 campaign and the head of Bostonians Against Sanctuary Cities, told Breitbart News that Graham’s suggestion “is very disturbing on many levels.”

“President Trump and America First were huge winners on Tuesday. That agenda buoyed Graham,” Murray continued. “The new base of the Republican Party is the American working class, of all races. ‘Common ground’ on immigration reform is code for amnesty, and amnesty is an insult to the millions who voted GOP in the election.”

To see a senior GOP Senator say he is going to reward American workers with more competition for jobs and housing and add a dimension of wage depression to a struggling economy is disgusting.

The Trump agenda breathed life into a dying GOP. It was always apparent that Graham was an America last globalist. However, I am surprised by the speed of his betrayal.

Pedro Gonzalez, an editor at American Greatness, accused Graham of “already running away from the America First mandate” of the 2020 election results, while NumbersUSA, which represents American workers, said Biden’s agenda has “no common ground” with U.S. voters.

Here's how Binder concludes the article:

For his 2020 re-election bid, Trump formed a working and middle-class coalition centered on economic nationalist policies to bring manufacturing home to the U.S., close the nation’s borders during a pandemic, and bring remaining American troops home from Afghanistan.

The agenda brought swaths of working and middle class Americans into Trump’s corner, with the majority of his donor support coming from business owners, blue-collar workers, homemakers, and police officers.

Biden, on the other hand, drew his donor support from Wall Street, tech corporations, university professors, scientists, and doctors—those belonging to the upper-middle-class and wealthy.

Working and middle-class Americans are the most likely to see the burdening impact of mass immigration through rapid demographic changes, crushed wages, increased competition in the labor market, and overcrowded schools and hospital systems.