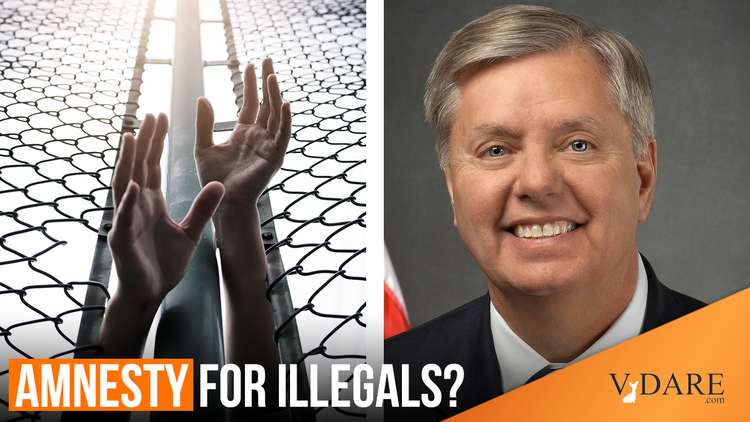 Lindsey Graham Suggests Amnesty Is On The Table. He May Be Alone In Thinking So

South Carolina Sen. Lindsey Graham wants to work with a President Joe Biden on immigration. “You'll also see me trying to find common ground that would benefit all of us and a good place to start, I think, would be the debt and infrastructure and immigration,” he told reporters last week [GOP Establishment Rebuked for Fleeing ‘America First’ with Amnesty Talk, by John Binder, Breitbart, November 6, 2020].

The only “common ground” on immigration for Graham and Democrats is Amnesty. The comments are certainly a disturbing sign some GOP leaders will cuck on immigration if Trump is not around. However, the backlash against Graham’s comments show the party is very different from what it was in the Gang of Eight era.

Two congressmen—Jim Banks of Ohio and Paul Gosar of Arizona—attacked the amnesty suggestion. “There is no common-ground between conservative Republicans & @JoeBiden on immigration,” Banks tweeted. “Any amnesty ensures Texas and Arizona and Florida will be solid blue and would join southern California as a once red area,” Gosar told Breitbart [GOP Establishment Rebuked for Fleeing ‘America First’ with Amnesty Talk, by John Binder, Breitbart, November 6, 2020].

Tucker Carlson also attacked Graham for his suggestion, saying the senator was all too happy to sell out his voters:

I was particularly interested … in the comments of Lindsey Graham who just won reelection in the state of South Carolina because conservatives voted for him … the people around Trump put a great deal of pressure on Lindsey Graham to send them money, so after a day or two, he made a great show of sending them $500,000.

But then on the issues that matter, Lindsey Graham immediately ran away from the ideas that he claimed to support and said that he would be happy to sell out his voters with an amnesty deal, like within hours of the election.

.@nedryun & @TuckerCarlson Calling Out America Last Republicans (@LindseyGrahamSC) For Trying To Push For Amnesty & Return The GOP To Being A Neo-Con Globalist Party

Ned Ryun: "America First is not going away." #AmericaFirst pic.twitter.com/8bjMWV9ni9

Graham will also have less power to make amnesty happen. Iowa Sen. Chuck Grassley, a fairly solid voice on immigration who supported the extension and expansion of Trump’s moratorium, will take over the Senate Immigration Committee from Graham. Center for Immigration Studies’ Mark Krikorian says this development will likely stifle amnesty attempts as the committee chairmanship would give Grassley an “informal veto” over immigration legislation [Migration Hawk Chuck Grassley to Run Senate’s Immigration Committee, by Neil Munro, Breitbart, November 9, 2020].

It’s typical for Amnesty Graham to look for any opportunity to reward his corporate donors with cheap foreign labor. However, we live in a different time from 2013. Trump won record numbers of Hispanics with nationalism, not a promise of amnesty. My view: there is little appetite for the bad policies the party embraced after the defeat in 2012.