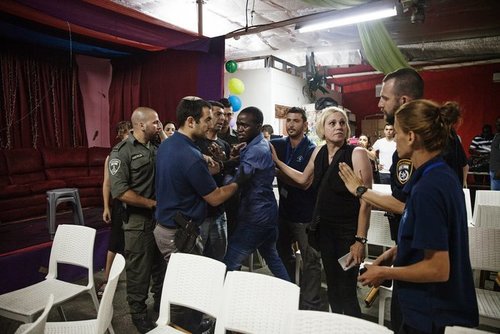 Earlier today in Why Is An Israeli Organization Helping “Refugees” Invade Europe? I linked to Israel’s Chilly Reception for African Asylum Seekers by Malin Fezehai Oct. 31, 2015. This begins -

In May, I attended a graduation party in Tel Aviv for Taj Jemy, a 28-year-old asylum seeker from Sudan… The celebration was interrupted by the Israeli police, who burst into the room, scattering the crowd. The partygoers recalling their skills of hiding, ducking and fleeing, spilled onto the street to find it barricaded and surrounded by horses. Seven people were arrested that night for not having their visas with them.

Israel’s policy toward African asylum seekers is to pressure them to self-deport or, as the former interior minister Eli Yishai put it, to “make their lives miserable” until they give up and let the government deport them.

(At the time, I suggested America should hire Yishai.)

None of this nonsense about how wonderful illegal valedictorians are for Israel! If ICE were allowed to do its job, it would be at every American graduation ceremony too.

How is it that Israel can adopt these measures with no opposition from the rabidly open-borders American Jewish organizations? I noted a brave Israeli writer discussing this in U.S. Amnesties Illegals, Israel Deports. Why The Difference?