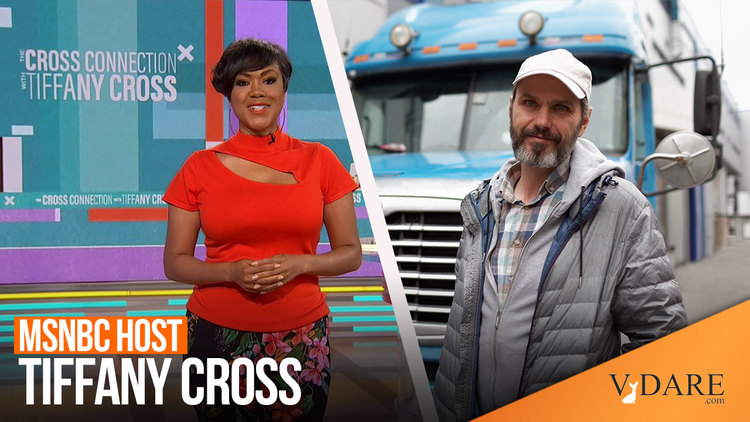 Our elite would rather tens of millions starve than lose the moral high ground of calling out white people for being “racist.”

MSNBC’s @TiffanyDCross: Trucking “is an industry populated by a lot of white men over the age of 55. This group of people overwhelmingly voted for Trump. Some people have talked about, you know, aggressive truck drivers cutting them off or not being helpful.” pic.twitter.com/Ob8Kg03Dwa

Because somehow white males being the primary individuals who keep alive our just-in-time inventory and supply chain system by collectively being the majority of truck drivers somehow is racist.

MSNBC host Tiffany Cross took aim at the trucking industry Sunday for employing too many middle-aged white males who “overwhelmingly voted for Trump” and are “too aggressive” on the road.

During a segment of “Cross Connection,” Cross joined CrossCountry Truck Driving School owner and president Pamela Day to discuss the ways in which the trucking industry can attract a more diverse workforce amid a labor shortage.

Cross began the segment by explaining that her brother is a trucker and that she worries about him because it is apparently a “dangerous industry.” The host then handed it off to Day to lay out how she will “disrupt” the industry while promoting diversity.

“We say we’re not building truck drivers, but safe CMV operators,” Day replied. “Folks that can get back to their home whenever they’re done with their shift. That’s the most important part.”

Cross said she interviewed minority truckers, who alleged that they experienced hostility and acts of racism on the job, and asked Day if the industry can become “more welcoming” to these workers.

“This is an industry populated by a lot of white men over the age of 55,” the host said. “This group of people overwhelmingly voted for Trump. Some people have talked about aggressive truck drivers cutting them off or not being helpful. So, obviously, the more populated it is with people of color I think you’ll see less of that.”

After briefly discussing her own experience as a truck driver and touching upon alleged instances of “racism,” Day claimed that attracting women to the industry is key to its success.

According to the Bureau of Labor and Statistics, the average age of a commercial truck driver in the U.S. is 55 years old, while only 20% of drivers are below the age of 45. The industry is predominantly made up of men, with women accounting for merely 7.8% of commercial truckers.

What happens when enough white individuals collectively tire of being called "racist" for simply breathing?

The nation shuts down.

With each passing second, this moment’s inevitability inches closer.