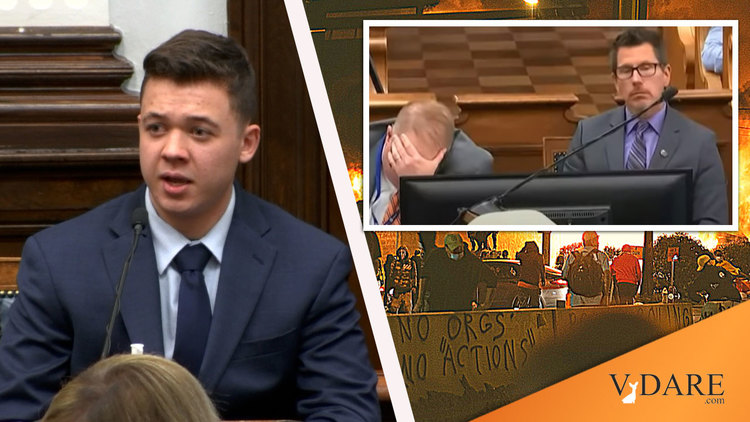 Kyle On Trial: Not A Standard Show-Trial Walkover

Earlier by John Derbyshire: From Wisconsin To Washington D.C.—"Our Culture And Way Of Life" Under Attack

I assumed, before it got under way, that the trial of Kyle Rittenhouse in Kenosha, Wisconsin would be just another show trial to pacify the Diversity gods. The sacrificial victim would be led up the steps of the temple pyramid, laid on a slab, and have his beating heart ripped out and shown to the mob.

It's true that there wasn't any real diversity in play. Rittenhouse and the three guys he shot, two fatally, were all white males—heterosexual and binary, so far as I know.

Those three guys were, though, Antifa and/or BLM rioters. Antifa and BLM are the muscle of our ruling class, street enforcers of the progressive Narrative, and so honorary Diversity on that account. An offense against them is an offense against our state ideology, against our gods; so Rittenhouse's trial and conviction should have been a mere formality, as with James Fields, Michael Slager, or Derek Chauvin.

It hasn't worked out that way at all. The prosecutors were all ready to play their part, but the presiding judge, Judge Schroeder, seemed not to want to go along. He actually cancelled some of their stunts in mid-stunt.

Even the witnesses didn't cooperate. Gaige Grosskreutz, the one who survived being shot by Rittenhouse, in questioning by one of the prosecutors, admitted that Rittenhouse didn't shoot him until he, Grosskreutz, was advancing on him, Rittenhouse, with a gun pointed at him. That was so off-script it caused the other prosecutor to face-palm at his desk.

Monday sees final summing-up and the case going to the jury. On what we've seen in the courtroom, and the extensive video evidence, Rittenhouse ought to be acquitted. The jurors may, however, be too scared to acquit.

Judge Schroeder has ordered the jurors' names sealed; but a BLM activist—which is to say, government stooge—named Cortez Rice, told a local media outlet that, quote: "There's definitely people taking pictures of the jurors and everything like that." End quote. If that's true, modern facial-recognition technology should make it easy to doxx them.

And even if the jurors do have the courage to acquit, Comrade Merrick Garland may step in with so-called "civil rights" charges. Which would not be double jeopardy! Absolutely not! No way whatsoever! Perish the thought! Totally different!

A "civil rights" prosecution would, however, affirm that white people have civil rights, too. Comrade Garland may feel that's too high a price to pay for a conviction. So perhaps this time the feds will let an acquittal stand.

Ah, the tangles of the law!

Well, we should have some kind of result today. Tony Evers, Wisconsin's thoroughly progressive Governor, has authorized 500 state National Guard troops to be present in Kenosha in support of local law enforcement.

That has Kenoshans asking rhetorically why the Governor didn't call out the guard for the three nights last year when Antifa and BLM were burning the town. I say "rhetorically" because I think we all know the answer.