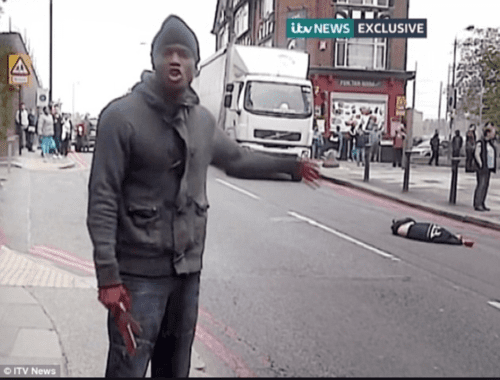 A Somali in London has stabbed six people, one of them an American woman, in Russell Square in London.(We don't have a picture of him—the picture at right is of an earlier African attacker—the man who decapitated Lee Rigby.) Because of stupid Norwegian refugee policy, this Somali had Norwegian citizenship. This has led to number of headlines about a "Norwegian-Somalian" attacker[The Telegraph], or a "Norwegian Somali" [The Guardian] but the Irish Times wins the prize:

about 10 hours ago Updated: about 3 hours ago

Even the Irish Times managed to mention that

The suspect in a knife rampage in central London is a 19-year-old Norwegian national of Somali origin, Scotland Yard has revealed.

The suspect emigrated from Norway to the UK in 2002, the Norwegian ministry of foreign affairs has said.

He has been interviewed and officers have spoken to his family. They have searched a property in north London and plan to search another in south London.

Assistant commissioner Mark Rowley said that so far no evidence has been found of radicalisation that would suggest the man in custody was “in any way motivated by terrorism”.

The point is that he was an ordinary Somali madman, not a member of an organized Muslim terrorist group. Somalis are always stabbing people, mostly each other. That's why Somali immigration to Norway is a bad idea,  and the Norwegians who allowed it on humanitarian grounds were misguided.

But what possible excuse can British immigration authorities give for allowing Somali immigration from Norway in 2002? Oh, right, Tony Blair's government  wanted to change the demographics.