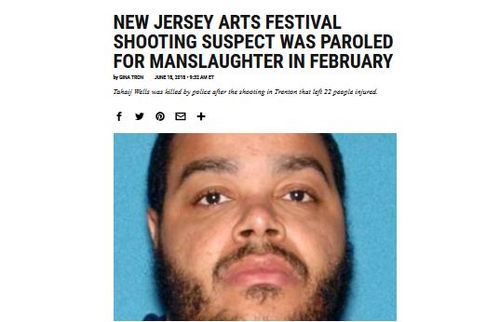 Yesterday, I suggested that the recent Trenton incident was not an attempted mass murder like Virginia Tech, but two black guys popping off shots at each other. (You know...like they do.)

Mercer County Prosecutor Angelo Onofri said two men are in custody and a 33-year-old man was shot dead by police. He said a “neighborhood beef” was behind what happened.

At a late-afternoon news conference Sunday, authorities identified the dead man as Tahaij Wells, who had been on parole since February after serving time in prison for a fatal 2002 shooting he committed when he was 17.

I predicted that that the race in concealed by the media's raceless reporting would be black. See Raceless Trenton Shooting: "Neighborhood Beef" With 20 Injured, One Dead Means Probably Black Shooter, "Leaded Law" In Effect.

The orginal clue was the bad marksmanship: blacks have significantly worse marksmanship than whites. To repeat myself, this is an example to the “Leaded Law” proposed by the Ben Kurtz blog (and noted by Steve Sailer here) with respect to mass shootings. Kurtz noted that the Club Blu shootings in Fort Myers, committed, by (allegedly) these guys at the right, were much less deadly than the Orlando Pulse shootings by Omar Mateen. Three shooters only actually killed two people, while wounding 18 [Trauma surgeon recounts night of Club Blu shooting, by Delia D'Ambra, NBC-2, July 28, 2016]. Kurtz wrote:

This is caused partly by environmental, rather than genetic factors. For example, Tahaij Wells has been in prison since 2002, and one thing prisons definitely don't have is firing ranges. As paroled felon with an illegal weapon, his access to marksmanship training in the repressively gun-controlled environs of Trenton, New Jersey was about zero.