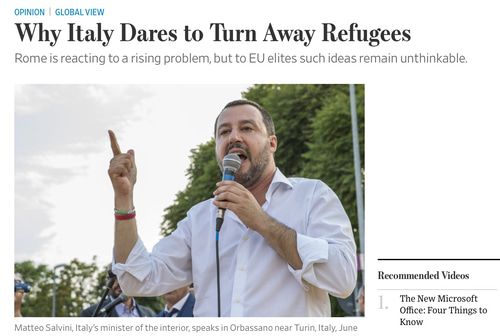 The new nationalist government of Italy is already standing for its people on immigration, and the people are rallying to its cause. New Minister of the Interior Matteo Salvini is not only standing up to the NGO's that have been smuggling "migrants" into Europe for years, he is also standing up against the Occupation Governments in countries like France and Germany that are attempting to replace the indigenous European population.

Not surprisingly, the Italian people support the Lega party on the issues of closing ports to migrant ships and standing up against EU efforts to force continued migration [Nearly 70 percent of Italians back Salvini's stand against EU on migrant ferries, by Liam Deacon, Breitbart, June 17, 2018].

For many Italians, starved for a national show of strength after years of marginalization, the standoff was almost as gratifying as a World Cup victory...

The League won 17.4% of the vote in the March elections, compared with 32.7% for 5 Star. But the League’s numbers are creeping upward. That’s partly because Mr. Salvini, a former radio talk-show host, has grasped what seasoned European politicians try not to think about: that Europe will face enormous migration pressure over the coming decades.

Africa’s population, currently estimated at about 1.26 billion, is projected to double by 2050.

As Steve Sailer is fond of saying, the representation of this demographic fact is the "world's most important graph." Though the international media is in a state of hysteria over Italy, Minister Salvini seems to be the one person who recognizes mass Third Migration is an existential threat not just to Italy, but to all Europe.

Bloomberg's Viktoria Dendrinou taunts that Italy's government is isolating itself by picking a fight on immigration with countries such as France and Germany. "If Italy’s leaders alienate nations that should be their allies, they may find little sympathy when seeking support for their own agenda," she writes [Italy's populists show how to lose friends and alienate people, June 18, 2018].

Yet this implies the EU Core of Germany and France will remain committed to Open Borders policies. Already, there are signs of turmoil in the German political system, and Angela Merkel may be nearing the end of her time in power. Merkel was able to buy time and prevent a revolt from conservatives in her own political coalition regarding immigration, but her political survival relies on her ability to negotiate deals with other European countries such as Italy to stem the flow of migrants [Merkel, allies avert collision for now in German migrant row, by Geir Moulson, The Wichita Eagle, June 18, 2018]. Thus, at this moment, Merkel is actually kissing up to the Italian government, promising to help relieve the demographic pressure on Italy.

German Chancellor Angela Merkel said on Monday she wanted to support Italy in its efforts to reduce the number of migrants arriving on its shores, possibly handling asylum requests for Europe in non-European countries including Libya.

Most migrants attempting to reach Europe from Africa take the sea route from Libya to Italy, though last year saw a spike in numbers departing from Morocco to Spain instead.

"Italy is one of the countries that is receiving a lot of refugees as a first arrival country," Merkel told reporters before talks with Italian Prime Minister Giuseppe Conte.

"We want to support Italy in its call for solidarity and hope that Germany will also be met with understanding when it comes to solidarity in Europe with the issues of migration."

Merkel said her talks with Conte and other European leaders in coming weeks would focus on the question of how the European Union could enable a stable government in Libya and how its coast guard could be better trained.

Strength begets strength. Italy has the potential to change the entire orienation of the European Union. 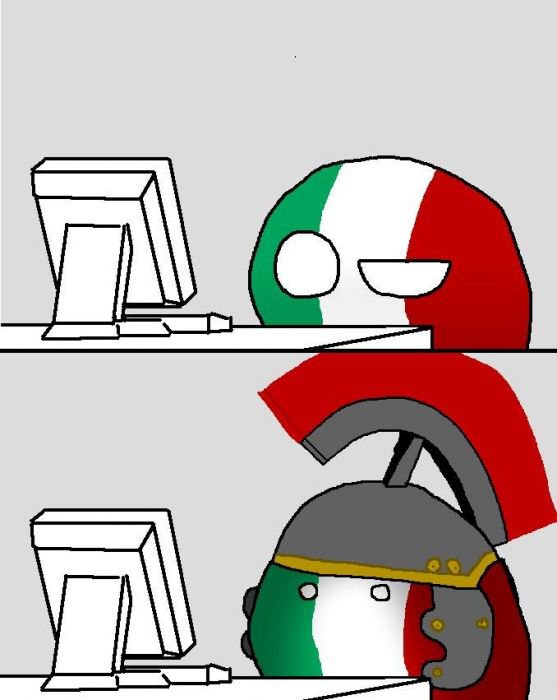 It's just tragic that it took the wholesale breakdown of European border control to finally force change on the EU leadership. And it's nothing short of enraging that the European Union is currently pondering how to bring a stable government back to Libya when it was the EU (along with President Obama and Hillary Clinton) that destroyed Libya in the first place.